Space fever was rekindled in July, 2009 as we celebrated the 40th anniversary of man’s footsteps on the moon.  Neil Armstrong’s “One small step for man, one giant leap for mankind” was suddenly in 24/7 rotation but the question on most people’s minds was “Are we still visiting outer space and, if so, why?”  A look back and a gaze forward can be had at the Kennedy Space Center Visitor Complex. 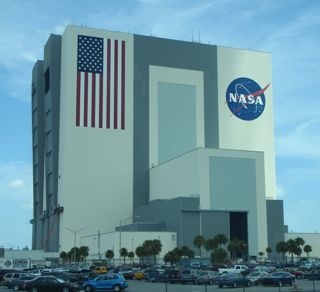 The multi-faceted complex boasts exhibits, films, memorabilia and a chance to get up close and personal with the inner workings of the U.S. space program.  First stop is the NASA Up Close Tour, a two-hour guided bus tour which provides tantalizing proximity to the stepping stones and backbone of our otherworldly adventures.  Our guide, Bruce, is chock full of facts and trivia and we learn that NASA is working on curing osteoporosis and developing space tourism at the same time.  It’s not long before the Vehicle Assembly Building, or VAB, comes into view.  This hulking cube of a building is 52 stories high and houses rockets shuttered by “garage doors” so tall they take 45 minutes to open.  Also poking high in the sky are LC-39A and LC-39B, twin launch pads from which we fire our rockets into space.

“From an astronaut’s perspective, heading into outer space is akin to a butterfly sitting on a bullet,” says Bruce.

We drive by the Shuttle Landing Facility, an air strip of epic length and are left with the exciting news that the next generation of rockets, dubbed Ares, will be involved in the creation of a space station on the moon in preparation for a manned mission to Mars.  It’s an awe-inspiring ride for all. 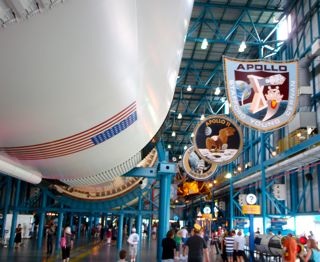 Tour-goers are deposited at the Apollo/Saturn V Center, which may well eclipse the bus tour for wow factor.  After an eight-minute film, the group is escorted to the actual Mission Control room used for the Apollo 8 space mission and the final minutes before launch are recreated in a dazzling multi-media display.  Last stop is a cavernous room housing an actual, unused Saturn 5 rocket.  Propped up horizontally and wonderfully close for inspection, the rocket inspires oohs and aahs and is a testament to the determination of countless engineers.

“Mom, I can’t believe I’ve seen an actual Saturn 5 rocket!” blurts out my seven-year-old son.  “It’s crazy how people like you and me can build these things.”

Also worth a peek is the Apollo 14 space capsule darkened by moon dust and a sliver of moon rock eager to be touched by visitors.  A visit to the International Space Station Center is available as a final stop but will seem anticlimactic by comparison. 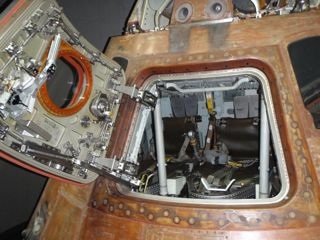 Back at the Visitor Complex, Astronaut Encounter features a retired astronaut talking about his experiences and taking questions from the audience.  It’s a treat to hear the spaceman describe his return “to the planet” when discussing his (space) ride home and describing space flight as “the best E-ticket ride.”  The photo opp afterward will have kids giggling with excitement.  At the Shuttle Launch Experience, a Disney-esque multi-media experience sends you “flying” into space and it’s a thrill ride that’s made all the more enjoyable thanks to Charlie Bolden, a retired astronaut with a keen sense of humor.  Also worthwhile are the IMAX films in regular rotation with space as their theme.  Plan on a full day of earthly exploration and beware, the well-stocked Space Shop could turn into a financial black hole!

The Kennedy Space Center Visitor Complex is open year round with the exception of Christmas Day and certain launch days.  Hours and additional visitor information can be obtained at kennedyspacecenter.com. 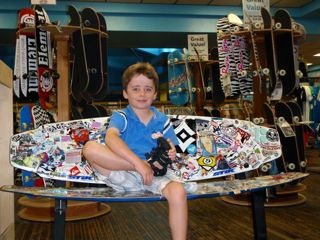 Where to stay:  The Four Points by Sheraton in Cocoa Beach is close by the Kennedy Space Center and Floridian in feel.  A sky-blue duvet graces the bed and ample light shines into the room thanks to a sliding glass door with a view to the cozy beach community.  The pool has its own waterfall and hot tub and surf gear galore can be purchased at the Cocoa Beach Surf Company, which is located within the hotel complex.  4001 N. Atlantic Ave., Cocoa Beach  (321) 783-8717; fourpoints.com/cocoabeach.  Doubles from $105. 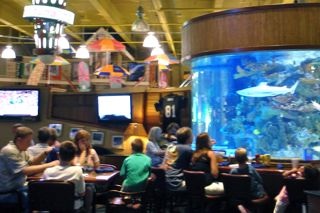 Where to eat:  Cuba has come to Cocoa Beach in Roberto’s Little Havana, which offers a true taste of the island.  Any of the pork dishes is sure to please as are popular sides such as plantains and black beans.  The many locals in the house speak to the restaurant’s reliability amid a sea of showier but less substantive beach-side establishments.  26 N. Orlando Ave., Cocoa Beach  (321) 784-1868; robertoslittlehavana.com.  At the Shark Pit Bar & Grill, pub grub meets seafood, with the standout a freshly-grilled flounder fillet surrounded by al dente vegetables.  Kids will be sated with one of the many brick-oven pizzas.  Lobby level, Four Points by Sheraton, (321) 868-8952; cocoabeachsurf.com/SharkPit/index.html. 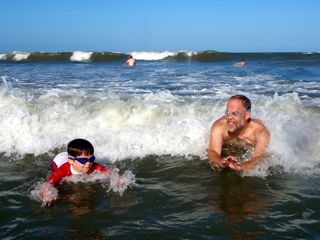 What else?  A visit to the surf and sand of Cocoa Beach, the surfing capital of the East, is a must.  The waves of the Atlantic make for perfect body or board surfing and the sand is a silky backdrop for your beach towel.  Families flock to Cocoa Beach on weekends so consider an early-or late-day visit.  As befits a surf city, dueling surf shops on the main drag carry more gear than you can shake a stick at.  The elder statesman is RonJon Surf Shop, opened by Jersey boy Ron DiMenna fifty years ago.  The store is open 24/7 and its festive atmosphere matches the merchandise.  ronjons.com  The young upstart, Cocoa Beach Surf Company (CBSC), bills itself as the world’s largest surf complex and has plenty of eye candy for both beginners and experts.  cocoabeachsurf.com.

Elaine Sosa is a food and travel writer based in Pittsburgh, PA. When she's not busy as a domestic goddess she's out traveling with husband Fen and seven-year-old son Steven. She hopes to be the next Charles Kuralt.