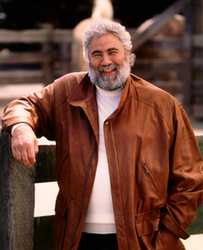 Bruce Aidells' culinary journey began at birth in St. Joseph's Hospital in Southern California where he was the first baby in the hospital's history to actually gain weight in the few days he spent there (most babies lose a few ounces immediately after birth). Soon he became a connoisseur of his mother's chicken noodle soup and continued to grow and thrive becoming a robust lover of all things culinary.

While preparing for a Ph.D. in biology at the University of California, Santa Cruz, he learned that fellow students and faculty were prepared to pay good money to enjoy his food at a small campus restaurant he founded and ran. And although he received his Ph.D. in 1974, his life was not to follow the path of research and academia. Four years later he hung up his lab coat and began cooking chicken 500 different ways at a small deli called Poulet which he co-founded in Berkeley, California. Soon, local T.V. found their way to the little deli and he made several appearances on the local news. He made the national news when he attempted to cook alligator, an endangered species in California, and was shut down by the local Department of Fish and Game.

Since then, Bruce has been a guest chef for Martin Yan's, Yan Can Cook; Merle Ellis' Cooking USA; Judy Ziedler's Kosher Kitchen; and two episodes of Yvonne's Cookbook on the Learning Channel. Bruce has made more than 30 appearances on local Bay Area T.V. and does a frequent cooking segment on the KRON weekend news. He has appeared along and with his wife, Chef Nancy Oakes of Boulevard Restaurant, on local and national shows such as PBS' Rising Star Chefs, CNN on the Menu, The Home Show, and several times on The Food Channel's T.V. News.

Bruce has written and co-authored nine cookbooks including meat and poultry chapters for, The New Joy of Cooking. His recently-published book, co-written with Denis Kelley, is called The Complete Meat Cookbook. His first major cookbook with Denis Kelley, Hot Links and Country Flavors, won the 1990 Julia Child cookbook award for best single subject cookbook. In addition, Aidells and Kelly wrote Real Beer and Good Eats in 1992, and Flying Sausages in 1995.

For the past nine years, Bruce has written a regular column, "Budget Cooking" for the San Jose Mercury News. In addition, he has been a frequent contributor to Bon Appetit, Gourmet, and Cooks Illustrated magazine.

Radio has been Aidells' preferred media, having been the substitute host on the local KCBS Kitchen for 4 years, as well as over 50 other radio appearances around the country. He has been a frequent speaker for numerous conferences of food professionals including the IACP, AIWF, and the National Meat Association. He makes numerous public appearances at special events, including a program on childhood food memories with Julia Child and Narsai David, for the Monterey Bay Chapter AIWF and 500 guests. Bruce has taught cooking classes around America, some alone and many with wife, Nancy Oakes.

In addition to a writing and teaching career, Aidells is Founder/Chef of Aidells Sausage Company, a national supplier of high quality specialty sausages. Bruce is considered as an innovative and creative force in the meat and poultry industry.