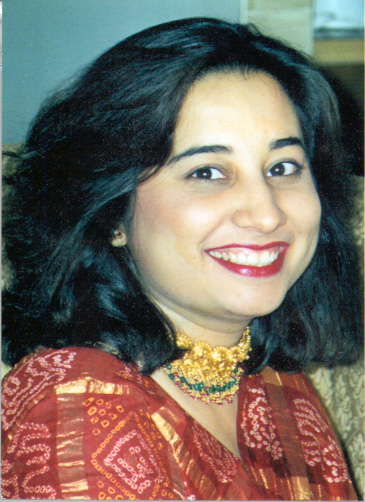 Monica Bhide (monica@monicabhide.com) is a cookbook author and freelance food writer. Her work has appeared in the Washington Post, Washingtonian, FabulousFoods.com, Seasoned Cooking, , New England , Abroad, and 's number one woman's magazine, Femina. She has appeared on Food Network on "Christine Cushing Live" and the nationally syndicated food show on Talk America Radio with host Jennifer English. Bhide is also the recipient of the Susan! B. Langhorne Scholarship for Food Writers at the Symposium for Professional Food Writers.

Growing up outside of , Monica learned authentic Indian dishes from the talented and knowledgeable hands of Indian women in her family and neighborhood. During frequent visits to , she moved from kitchen to kitchen gathering delightful anecdotes and original recipes. These anecdotes now accompany her recipes-all told in the down-to-earth and lively voice that infuses each recipe with the energy and passion she has for food, family, and .

Her highly praised first cookbook, The Spice Is Right: Easy Indian Cooking for Today (Callawind Publications, 2001) is a collection of mouth-watering menus tempered with her up-to-date touches on classic Indian recipes. Monica's newest cookbook, The Everything Indian Cookbook: 300 Tantalizing Recipes--From Sizzling Tandoori Chicken to Fiery Lamb Vindaloo (Everything! Series) has just been released (May 2004).

Monica has been instrumental in the creation, organization, and expansion of the eGullet Culinary Institute focusing on providing online cooking classes. The institute has been described as the "Next Food Network" by the Washington Post. In addition, through collaboration with top cookbook publishing houses in the U.S., she garnered a veritable who's who of award-winning authors-including James Peterson, Paula Wolfert, James Villas, and Mark Bittman-to teach cyber-classes, participate in Q&A's, provide recipes and in-depth biographies, and provide books for giveaways. In addition, she writes freelance food articles for this popular Internet food site (www.egullet.com).

Born in , thirty-five-year-old Monica moved to the in 1991. She has an engineering degree from and two masters in information systems technology from . She is the founder of Spice is Right Culinary Consulting. She currently resides in , with her husband and four-year-old son.