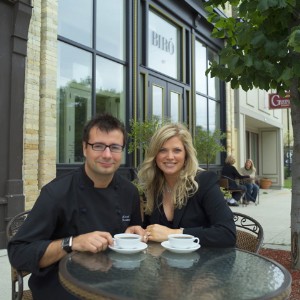 One of the youngest chefs in European history to achieve the title Master, Marcel Biró (biro@charter.net) is acclaimed for winning several coveted European awards, for his accomplishments in Michelin-starred restaurants, and for his dedication to demystifying classic cuisine.

Marcel was born in the former East Germany in 1973.  He began cooking with his chef/restaurateur father at the age of six and entered culinary school and the kitchens of the Deutsche Demokratische Republik, (DDR, or Communist East German Party) at the age of fifteen.  By twenty-one, Marcel was a European certified chef instructor, teaching aspiring chefs by day and cooking in Michelin-starred restaurants by night.  At twenty-four, he became one of the youngest chefs in European history to attain the title Master Chef de Cuisine and had already served as chef to German Chancellor Helmut Kohl.  At age thirty, he became the first German citizen to land a national television cooking show deal in the US, and in 2006, at just thirty-two, he was appointed Ambassador of German Cuisine by the CMA on behalf of the German Federal Government.

Marcel is star of the Emmy® Award-winning, national PBS reality-cooking series The Kitchens of Biró; co-author of Biró: European-Inspired Cuisine (Gibbs Smith, May 2005) and the forthcoming Ó: SpanAsian Cuisine by Biró (Gibbs Smith, February 2007); and CEO and chef of Biró Internationale, LLC, an integrated cuisine company consisting of acclaimed restaurants, culinary schools, and how-to media content.  He has been the focus of innumerable television, radio, and print features throughout North America and Europe, including on NPR and in The Wall Street Journal, SmartMoney Magazine, and TV Guide.  He has worked in leading restaurants in Germany, France, Italy, Hungary, Lichtenstein, Switzerland, Spain, and Austria, and has opened restaurants for clients in 34 states and 13 countries.  For more information, click www.marcelbiro.com.

Shannon Kring Biró (biro@charter.net) is creator, writer, executive producer, and co-star of the Emmy® Award-winning, national PBS reality-cooking series The Kitchens of Biró, and co-author of Biró: European-Inspired Cuisine (Gibbs Smith, May 2005) and the forthcoming Johnsonville Big Taste of Sausage Cookbook: More Than 125 Recipes for On and Off the Grill from America’s #1 Sausage Maker (Broadway Books, June 2006), Ó: SpanAsian Cuisine by Biró (Gibbs Smith, February 2007), and Sister Salty, Sister Sweet: A Memoir of Sibling Rivalry and Sisterhood (Running Press, May 2007).

An award-winning marketing and public relations professional, Shannon has been featured on NPR and in dozens of leading publications including TV Guide, SmartMoney Magazine, Woman’s World, and Redbook.  Her work has appeared in Gastronomica: The Journal of Food and Culture, Condé Nast Traveler, German Life, France Today, and many other publications.

A frequent keynote speaker at events throughout the US, Europe, Indonesia, and Asia, Shannon was a finalist in the 2004 Stevie Awards for Women Entrepreneurs. She is president and chief marketing officer of Biró Internationale, LLC, an integrated cuisine company consisting of acclaimed restaurants, culinary schools, and how-to media content. Also owner of an international restaurant and marketing consultancy, she is currently co-authoring a book on new German cuisine with Marcel Biró, the newly appointed Ambassador of German Cuisine.  For more information, click www.marcelbiro.com.