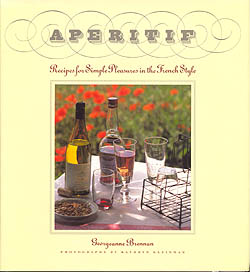 Georgeanne Brennan (jschrupp@sbcglobal.net) is an award-winning cookbook author, journalist, and teacher who divides her time between her house in Provence, which she purchased over twenty-five years ago, and her small farm in Northern California. She is the author of many books, including the modern classic, Potager, Aperitif, for which she won a Julia Child Award, and The Food and Flavors of Haute Provence for which she won a James Beard Award. Her latest book, Savoring France, was awarded Best Series at the 1999 Versailles International Cookbook Awards. Forthcoming is The Mediterranean Herb Cookbook. In September, 2000, she opens the doors of her culinary vacation school in Haute Provence. Her articles have been featured in such publications as Metropolitan Home, Bon Appetit, and Fine Cooking. She is a regular columnist and feature writer for The San Francisco Chronicle.