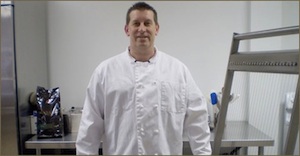 Eric Cayton (Derry.Church.Artisan.Chocolates@gmail.com) is the Chocolatier for Derry Church Artisan Chocolates, LLC, located at 675 Williams Grove Road, Suite #1 in Mechanicsburg, PA 17055. ( http://DerryChurchArtisanChocolates.com ) Cayton is 5th generation "Derry Church", which is the historical name for the small farming community that later became the modern day town, of Hershey, Pennsylvania. He had ancestors living at Derry Church, at the time of Milton Hershey's birth in 1857. Later, when Hershey built his original chocolate factory in 1903, many of Cayton's ancestors worked there, and some still do to this day! Hershey is sacred ground in the world of chocolate, and working in the business of chocolate is literally ingrained in Cayton's DNA.

Early in his culinary career Cayton worked as an Executive Chef & Pastry Chef at numerous hotels and country clubs in Central PA as well as Florida. He then opened a catering company in 1995 where he first began creating and selling his first actual chocolate truffles. Cayton's life long love affair with chocolate began many years earlier, however, in his Grandmother's kitchen, where he would create chocolate treats and other assorted chocolate concoctions to try and earn extra money selling to his school mates.

Except for a 2 year apprenticeship program as a Sous Chef, Cayton is primarily a self-taught Chef. He began officially working in the Foods Industry the day he turned 15, working at various concession stands at HersheyPark in Hershey, PA, then working his way up the ranks by studying CIA text books, and professional patisserie and confiserie text books.

Eric Cayton and a silent Investment Partner founded Derry Church Artisan Chocolates early in 2009, named in honor for his much beloved hero, Milton Hershey. He then began casually writing on the subject of artisan chocolates and patisserie that same year.