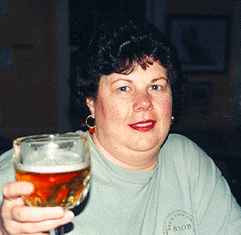 After years in the medical administration field, Sara Doersam (dicepro@ix.netcom.com) and her husband Phil, a data processing professional, left the security of steady employment to launch the first "brewspaper" dedicated to specialty beer and homebrewing in the Southeast.

Now past its fifth year of publication, Southern Draft Brew News is a bi-monthly niche newspaper with a Southern focus that features regional, national and international news along with feature stories about the craft brew industry and homebrewing.

Now based in Las Vegas, Nevada, Sara is a frequent beer judge in regional homebrew competitions and an active member of several nonprofit homebrew and craft-brewed beer appreciation clubs. She is a freelance beer writer and a charter member of the North American Guild of Beer Writers.