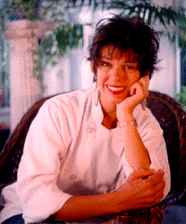 Rosemary's, (rosemary.furfaro@comcast.net) love affair with food can be traced back two generations to her Italian grandmothers whose zest for life and flair for cooking have been a lifelong inspiration. This inspiration was intensified by her student experience in Pisa, Italy where she studied Italian art and culture.

The first 15 years of Rosemary's business career were spent in administrative positions, including a stint where she was in charge of road construction and maintenance for the City of Syracuse. Throughout this time, the urge to cook was constant and resulted in many fine meals for her friends and colleagues as well as a small catering business.

Finally, the desire to try her hand full time in the restaurant business overcame her good sense and she opened a restaurant in Syracuse, New York. The restaurant, St. Basils Cafe, became well known in Central New York for its version of California Cuisine.

In addition to her chef and owner duties, Rosemary wrote a very successful cookbook reflecting her menu of Asian, Southwestern, and Pacific Rim influenced foods, worked as a food stylist, and gave cooking classes.

She has relocated to Northern California, initially working as a freelance food writer and recipe developer while moonlighting at select San Francisco restaurants to sharpen her culinary skills and explore the world of food and wine. Her client list for recipe development includes the California Kiwi Fruit Commission, Del Monte, Frito-Lay, Hunt-Wesson and Swiss-Miss. Rosemary now focuses her attention on food writing and tries her recipe creations on clients while working as a private chef. She has written for The Washington Post, Chile Pepper magazine, various small presses, and food-related businesses. Although her schedule is full, she manages several trips to Italy where she is conducting research for another cookbook idea.