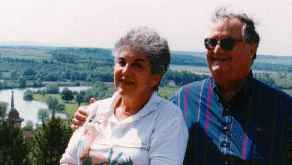 Walter and Cherie Glaser (walglaser@aol.com) are a truly global writing and photography team. Based "Down Under" in Melbourne, Australia, their articles on food, travel, humor, business and adventure have appeared in publications as diverse as the Los Angeles Times, Manchester Guardian, Tatler Asia, Far East Traveler, Korea Herald, Malaysian Business Magazine, South African Penthouse, and numerous other publications around the world. In the early 90's Walter wrote much of Fodor's Guide to Australia.

Cherie, who has a great eye for color and composition from her years as a Sogetsu Ikebana teacher, is now one of Australia's top travel photographers. Walter, who was educated at Melbourne's Wesley College and then at Melbourne University, started his career as an advertising executive, retiring from that field to pursue his great love for travel writing. They travel the world many times a year, returning to Australia to write about their experiences.

Food also looms large in their area of interest. Cherie has always been an outstanding cook and Walter, who is a member of the Chevaliers du Tastevin, Chaine de Rotisseurs and an Associate member of the Academie Culinaire de France in Australia, says that he should be awarded an honorary PhD in Eating. As a team they write on food for several prestigious magazines, from the Gulf States to South East Asia.

In their travel stories they cover the unusual as well as the excellent, and hope that you will find their articles not only interesting and thought-provoking, but also helpful if you plan to follow in their footsteps.