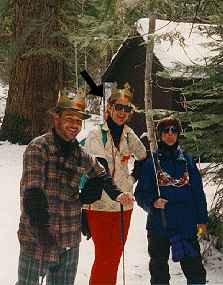 Kristin (middle) (kristin@alumni.berkeley.edu) is -- among other things -- a writer, editor, and food stylist. Originally from Manhattan Beach, California, Kristin moved north in 1984 to attend U.C. Berkeley where she received her bachelor's degree in Art History. Currently, she divides her time between the San Francisco Bay area, Manhattan Beach, and Studio City, California.

Kristin has often -- and to her great embarrassment -- been referred to as a Renaissance Gal. She has been published on the internet and in traditional print media, bought art for galleries, led teams of people up large rocks, designed logos and other things graphical, managed a coffeehouse, and graduated from the California Culinary Academy.