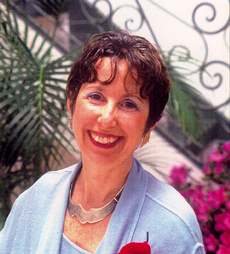 Award-winning author Kitty Morse
(kitty@kittymorse.com) was born in Casablanca, Morocco, of a French mother and British father. She emigrated to the United States at the age of seventeen. While studying for her Master's Degree at the University of Wisconsin-Milwaukee, Kitty catered Moroccan diffas, or banquets, and went on to teach the intricacies of Moroccan cuisine in cooking schools and department stores nationwide. In June 2002, she conducted a Culinary Concert on Moroccan culture and cuisine hosted by Julia Child, as a benefit for the Harry Bell Foundation of the International Association of Culinary Professionals (IACP). Since 1983, Kitty has organized an annual tour to Morocco which includes culinary demonstrations in her family home, a Moorish riyad south of Casablanca. She is the author of nine cookbooks.

Public Speaker:
Kitty is often invited on national public radio, and has been interviewed twice on the BBC's The World. In 2003, she participated in The Book and the Cook event in Philadelphia (PA). Kitty has spoken at meetings of the Chicago Culinarians, the Los Angeles Times Festival of Books, the City of Chicago, the California Farm Conference, the IACP convention, Kraft Foods USA, the famed Golden Door Spa in Escondido (CA,) and, on three occasions at the Ahwahnee Hotel's annual Chef's Holiday in Yosemite National Park. In 1992 and 1999, she gave seminars on North African cuisine and culture at the Smithsonian Institution in Washington (D.C.)

Television:
Kitty has appeared on Sarah's Secrets, hosted by Sarah Moulton of the Food TV channel, all national affiliates in San Diego (CA), as well as Morocco's national television and Baja California's Canal Azteca. In December 1998, she presented A Biblical Feast on the QVC shopping channel. For over a year, she held a regular spot on California Heartland, a statewide series focusing on California's agriculture. In additon, she has produced and hosted two series of her own.

Print Media:
Kitty was featured in the January 2004 issue of Coastal Living magazine, and one of her menus appeared in the 2002 issue of Bon Appetit, under the heading, Moroccan Cuisine: Cuisine of the Year. Her recipes have been featured in the New York Times, the Washington Post, the Chicago Tribune, the San Jose Mercury News, the San Diego Union Tribune, Sunset (as one of the Best Chefs of the West), Fine Cooking, Cooking Light, Eating Well, Gastronomica, Gulliver's Online Travel Guides, and Aramco World. Once a weekly contributor to the Los Angeles Times, she writes for a number of publications. Kitty belongs to the International Association of Culinary Professionals (IACP) and is a member of the jury for Slow Food. She is fluent in French and Spanish.