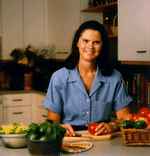 Barbara Gibbs Ostmann is a St. Louis-based journalist with more than 20 years of experience in newspaper, magazine and cookbook writing and editing. Since 1993, she has been food writer for the New York Times Regional Newspaper Group. Her work has gone out on the New York Times Syndicate since 1995. Previously, she was food editor of the St. Louis Post-Dispatch for 16 years, before joining the University of Missouri-Columbia as an assistant professor and the coordinator of the Agricultural Journalism program for three years. She now teaches part-time in the School of Journalism.

Barbara is chair of the Food Writing and Publishing Section of the International Association of Culinary Professionals, a past president of the Association of Food Journalists, and founding president of the St. Louis Culinary Society. She is listed in Who's Who. Barbara has won numerous national food and feature writing awards and also has served as a judge for many writing competitions and recipe contests. 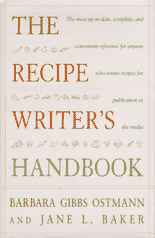 She is also the co-author of The Recipe Writer's Handbook, a style manual, and co-editor of a series of 12 cookbooks.