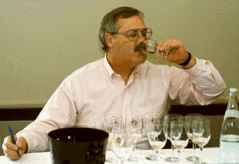 Steve (wine2words@aol.com) is a freelance wine writer based in San Francisco.

"Vintner's Choice" was a prominent feature on the Wine Page of the San Francisco Chronicle from October 1988 to October 1994, making it one of the longest running freelance wine columns in a major metropolitan newspaper in U.S. history.

"Vintners Choice" was discontinued on Sally's Place in 2001, and the published articles archived for the convenience of the reader. Steve Pitcher has not been a member of the Vintners Club since 2003, and does not support or endorse the organization in its form since that time.

Steve has been a regular contributing editor for the bi-monthly national magazine Wine News (www.thewinenews.com) since 1992, with several cover features to his credit and his own tasting notes section called "West Coast Case." His freelance work has also appeared from time to time in the Wine Section of the San Francisco Chronicle since 2003.

Steve is particularly active in Lawyer Friends of Wine (www.lawyerfriendsofwine.com), a wine appreciation organization for California attorneys and judges. In addition to these organizational activities, Steve Pitcher regularly serves as a professional judge in the San Francisco International Wine Competition, the largest and most prestigious wine competition in the nation, and the wine competition of the Mendocino County Fair, one of the smallest and most personally rewarding.

Steve Pitcher is a 2003 recipient of the Merit Cross of the German Order of Merit. Awarded by the German President, the medal is the highest tribute Germany can pay an individual for service to the nation (in Pitcher's case, its Rieslings).