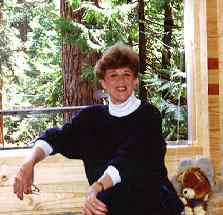 Sandy Sims (sansims@aol.com) lives and writes in San Jose, California. She has a BA in Psychology and a Master's in English with an emphasis in Creative Writing. Her publications include Woman's Day, the Los Angeles Times, The San Jose Mercury News, and Bay Area Online Magazine. She is currently writing a humorous book about the trip she and her husband took to France and a book of short stories. She is also writing feature stories for the Los Gatos Weekly Times and Saratoga News. Since their boys have grown up and moved out, Sandy and her husband have become restaurant frequenters and know the culinary places in San Jose well, always on the lookout for someplace new.

After growing up an Air Force brat and working her way through college, Sandy began her professional life as a young thing, in the field of social work, first working with elderly disabled people, then with foster children. That was till she had her own children (two sons) and became a homemaker -- the job she held while obtaining her Masters. She even participated in a dinner co-op for some years. Then as an older thing with a Masters, she began teaching English, advising the school newspaper, and running a computer lab at Mission College in the San Jose area. That was until she realized she was becoming an even older thing and needed to get on with what she actually intended to do -- write full time. Now she enjoys the fruits of it all when she sits in front of her computer tapping out stories, travel articles, restaurant lists, feature stories, that is except for those times she goes nuts trying to figure out a good lead for a story or how to spell a word like chutzpah. And so it goes.