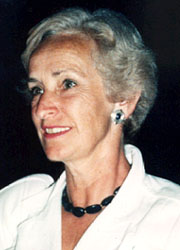 Elizabeth Cawdry Thomas (elizabethcthomas@earthlink.net) grew up in England, went to France for annual Summer vacations and stayed with French families outside Paris and in Blois at aged twelve and seventeen. She earned her certificate from the London Cordon Bleu in l976 and has attended classes from chefs and other teachers, French, American, Italian and Chinese, both in the United States and in their own countries. She taught cooking in Berkeley, California for twenty years, also in San Francisco, in Washington State, in China, and on the islands of Crete and Antigua. She was formerly the executive director of the cooking school at "Cooks and Books," a cookbook shop and cooking school in Danville, California.


Elizabeth has given benefit demonstrations in aid of causes including the Ecole Bilingue, the College Preparatory School, the Y.W.C.A., and the Hayward Zucchini Festival. She has been a judge at a Ghirardelli Chocolate Cake Contest, the Danville Chili Cook-Off, and the Quady Winery Dessert Contest for professional chefs, and was the Instructor at Foothill College's Summer Cooking School in l993 and l994. She has twice escorted groups of her students to Lorenza de Medici's cooking courses in Tuscany.

In l980 Elizabeth gave a lecture comparing French, English, and American food preparation and customs with those of China to the Xi'an Professional Food Society, in China. She then gave a cooking demonstration in the largest Xi'an restaurant kitchen, which overflowed with chefs craning to see the action, including cutting up chickens the French way, so different from the Chinese way, and preparing "Oranges in Caramel Sauce." The lecture and demonstration were featured on the television news that evening.

Elizabeth's recipes have been published in the Washington Post, the Berkeley Gazette, the Oakland Tribune, the Contra Costa Times, House and Garden Magazine, and in the following cookbooks: The International Association of Cooking Schools Cookbook, Symposium Fare Two (recipes and comments from the l984 Oxford Symposium on Food and Cookery, in which she participated), Fish and Shellfish, California Fresh, and The Macadamia Cooking Treasury.

Elizabeth has participated regularly in the Oxford Food Symposium and in the biennial Workshop on Molecular and Physical Gastronomy which she helped to initiate in Sicily. These workshops are attended by physicists and chemists with a serious interest in food, as well as by chefs and food writers. At one she led a blind tasting of different salts: kosher, sea, regular table salt, and the plain chemical, sodium chloride. These were tasted alone and with sliced, ripe tomatoes. This experiment was repeated at the Oxford Symposium with a different group of participants, including Julia Child. At another of these workshops in Sicily Elizabeth led a blind tasting comparing the results of cooking both swordfish and broccoli in a microwave oven and by conventional methods.

Elizabeth belongs to the San Francisco Professional Food Society, and the Baker's Dozen, has served on the Northern California Board of the American Institute of Wine and Food, and is a former President of the Berkeley Wine and Food Society.