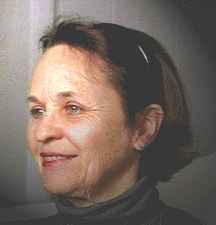 Evelyn Thompson, (evelyn@ethnic-grocery-tours.com), was raised in the Midwest in a household where the cooking technique of choice was boiling, applied with equal vigor to string beans and T-bone steak alike. As an adult, she was introduced by her neighbors, Martha and Michael, to home style Continental cuisine and from then on she became passionate about cooking ethnic foods. This led to shopping for hard to find ingredients. At that time, Chicago's ethnic markets were usually known only to their own or a limited number of interested outsiders. Though hard to believe by today's multi-cultural standards, conventional super markets proudly displayed canned pizza sauce as their most exotic product and cilantro from ethnic markets was smuggled into the kitchens of the enlightened in small brown bags.

After marrying her Hungarian born, Chinese/Jewish husband who shared her enthusiasm for ethnic foods, she began a systematic street by street exploration of Chicago's many and varied ethnic grocery stores. Years later, after giving a presentation to the Chicago Culinary Historians ("A Decade of Change in Chicago's Ethnic Markets"), she started leading tours to these stores.

Besides her tours, which she insists must be small and intimate to allow for discussion while aisle strolling, she teaches cooking classes at Family Health Resources for people with special dietary needs. She is a member of the Chicago Culinary Historians and the Chicago Culinary Guild and has written articles for the Ann Arbor Culinary Historians and the Chicago Tribune ("Global Takeout". Good Eating, Chicago Tribune 4/24/96). Her tours were the subject of an article in the Chicago Tribune ("Grand in-town tour", 9/13/96) and she has appeared on WGN TV news. She was a consultant with the Chicago Historical Society for the exhibit "Keepers of the Culture", the Chicago Bureau of Tourism for a presentation at Navy Pier and most recently has helped organize an ethnic market tour for the students in the Department of Nutrition at University of Illinois Chicago and Loyola University.