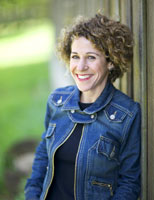 Laura Werlin, foodflaura@aol.com, is positively passionate about cheese. Underscoring her passion are the three books she has written on the subject. Her first book, The New American Cheese, (Stewart, Tabori & Chang 2000), was the first book of its kind to focus exclusively on American cheese, and includes the stories of 55 American cheesemakers, the history of cheese in America, how to taste cheese (including a special cheese vocabulary) and 80 recipes for cooking with cheese. The pioneering topic got the attention of the International Association of Culinary Professionals, which honored the book with its prestigious cookbook award for best American cookbook.

Werlin’s second book, The All American Cheese and Wine Book, (Stewart, Tabori & Chang 2003) is the winner of a prestigious James Beard cookbook award. Another first-of-its-kind book, this one brings attention to a new crop of cheesemakers as well as American winemakers, and centers on how to put cheese and wine together. Werlin includes 50 recipes for entertaining with cheese, including a section on how to create special cheese plates at home, as well as an easy-to-read chart that helps streamline the cheese and wine-pairing process.

Prior to food writing, Werlin spent fifteen years in television news, primarily in San Francisco. She was the assignment manager at the CBS television affiliate where she was in charge of creating the line-up for the daily newscasts and orchestrating coverage of breaking news. She was also a field producer for a weekly show on women and business at the ABC owned and operated station in San Francisco.

Werlin is on the board of the American Cheese Society and is an active member of the International Association of Culinary Professionals, Women Chefs & Restaurateurs, the James Beard Foundation, the San Francisco Professional Food Society, and the American Institute of Wine and Food. She is a graduate of the University of California at Berkeley and lives in San Francisco.