Absinthe: The Pursuit of an Intoxicating Myth 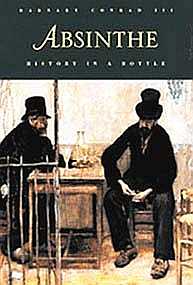 Frank (not his real name) and I sit across from each other at a small, bare, wooden table. Not a word is exchanged between us. According to ritual, he suspends a triangular spoon over the rim of the glass, then pours water over a sugar cube suspended on the spoon. As the drizzled sugar water mixes with the liquor, a milky, green liquid soon fills the tumbler and I sit before my first glass of absinthe--the immortalized and illegal liquor made famous in Europe at the turn of the last century.

I anticipate the legendary effects--inspiration, enlightenment, beautiful hallucinations. What I experience is quite simple: a refreshing, liquorice-like cocktail with a alluring milky-green glow no different than any other drink.

In line with retro trends that have resuscitated martinis and cigars from obscurity, absinthe is becoming the drink du jour of Victorian era enthusiasts, musicians, artists, and others eager to recapture an ideal time in history. Absinthe-themed restaurants (don¹t expect real absinthe) have been cropping up, including San Francisco's Absinthe, which proclaims, "The era of Absinthe is about to be reborn."

"Absinthe: History In A Bottle "(Chronicle, 1998) has been reissued, and on the internet a growing number of sites devoted to absinthe culture and artifacts can be found. Absinthe parties and gatherings have been sited in San Francisco.

"Many see absinthe as a way to expand consciousness, many see it as a way to escape our sterile, modern age," says Frank, who is suspicious of a widespread absinthe revival, "Absinthe is just a drink that was marketed very well and managed to secure a place in history--anything else is false based entirely on nostalgia and myth."

Absinthe is distilled with various herbs including Artemisis Absinthium, also known as wormwood. Wormwood was celebrated by ancient Greeks as a medicinal and is said to bring about a meditative, dreamlike, and hallucinatory state. Though wormwood was the key target of absinthe prohibitionsists, many dismiss wormwood¹s alleged hallucinatory qualities.

"People expect some drug-like drink that will take them to another level of consciousness. It's simply not that way," says Mike Lavarone, creator of an absinthe memorabilia website, "Drink five shots of 70% pure ethyl alcohol and you're going to get a buzz. Drink the same five with a touch of wormwood and you're going to get pretty much the same buzz."

Absinthe was celebrated in paintings by Picasso, Degas, Van Gogh, and was eulogized by poets Verlaine, Baudelaire, and Rimbaud, and popular in the cafe society of France. Though many considered absinthe a refreshing drink in moderation, many others took Absinthe consumption to epic proportions.

Absinthe developed a recreational vogue during the latter half of the eighteenth century earning the name "The Green Fairy" from enthusiasts. Absinthe was distinguished by a dazzling blue-green clarity. It was traditionally served with water and a cube of sugar; the sugar cube was placed on an "absinthe spoon", and the liquor was drizzled over the sugar into the glass of water and turned a milky white.

The only drink ever singled out for global extinction, absinthe has been illegal in the United States since 1912 . Today, those who want the real stuff smuggle bottles from the Czech Republic, Spain, and Portugal--countries where absinthe is either produced or available. There are still a few absinthe-like drinks available today without the wormwood.

Still, the absinthe myth endures. For the adventurous, absinthe recipes are available on the internet (www.paranoia.com/drugs/misc/absinthe ). The mythic drink (sans wormwood) can be enjoyed at many bay area bistros. The movie Speed And Absinthe (www.purefilm.com/speed&absinthe/index.html)was made to fuel public fascination in the drink. Anise-flavored alternatives, like Pernot, Ricard, and Granier, and being served up in much the same fashion as our absinthe-drinking forefathers.

"What difference is there between a glass of absinthe and a sunset?" wrote Oscar Wilde in a rhapsodic moment. I ponder this idea as finish my glass of absinthe. Although I enjoyed my drink, and would probably try absinthe again, I harbor a suspicion--the absinthe myth, as alluring as it is, may be a bit more intoxicating than the reality.

"The first stage is like ordinary drinking, the second when you begin to see monstrous and cruel things," wrote Oscar Wilde of absinthe, "But if you can persevere you will enter in upon the third stage where your see things that you want to see."