"Whisky waiting to be made." That's what the Scots call rain, fog and mist, and I encountered plenty of the latent stuff, as well as the actual liquor itself, on my recent trip to Scotland.

I can find a perfectly good selection of Scotch at virtually any bar in Los Angeles. So why did I undertake the lengthy, arduous trip to Scotland to sample some? I was pursuing the notion that most food and drink tastes better closest to its home.

So I flew first into London's Heathrow airport, then on to Glasgow, and later a succession of smaller flights to remote Scottish towns, the places where Scotch -- "whisky" (without the "e") as the locals call it -- is made.

The flight aboard a twin-prop 38 seater to Islay, due west of Glasgow, brought us face to face with too much "whisky waiting to be made." We flew through heavy clouds and fog straight into a storm, the bumpy kind of flight that makes you wonder why men ever thought it sane to leave the ground.

Finally, we see the island as we swing in low over a warehouse, "Laphroaig" painted in huge letters on its side, before descending into an airport so small that the pilot executes a u-turn at the end of the sole runway to taxi up to the terminal.

Heather, low-slung and purple, blooms along the roads, as does whin, a yellow-flowering scraggly bush, and broom, a sweet-smelling yellow flower. Sheep (many of them black-faced) and cows outnumber people on this island by a margin of ten to one, but also the few locals we meet not only have charming, if thick, accents, but are unusually friendly and warm. A few animals wander carelessly across the roads, or stop to graze, their rear ends jutting dangerously into the highway. Picturesque walls of hand-stacked rocks -- dry stane dykes -- mark property lines. Woolly, prehistoric-looking horned creatures, Highland cattle are the most interesting of the local livestock inhabiting the vast brown and green fields.

Islay, which draws 40,000 visitors annually, has three policemen for its 3000 residents. The population has been declining due to lack of employment, and the island doesn't offer many opportunities -- or much excitement -- for the young. But businessmen, writers and artists have recently relocated here to take advantage of the isolation, enjoying the absence of malls, billboards and general 20th century noise.

One of Scotland's four whisky-producing regions (along with Highlands, Lowlands and Campbeltown), Islay is known for the smoky quality of its liquor, owing to the burning of peats -- local soil of partially carbonized vegetable matter -- to dry the grain that combines with water and yeast to create whisky. Though only water, malted barley and yeast are used to make whisky by the nation's 120-plus distilleries, individual brands vary wildly in taste and complexity, even within the same region.

"Single malt" whiskies, made without the addition of grain whiskey, much like 100 percent agave tequilas are made without the addition of other alcohols, are like a solo musician compared to a band -- quirky and individualistic. Perhaps that's why they account for only ten percent of whisky sales, as Many less sophisticated drinkers prefer the sometimes smoother, more consistent flavor of blends, which include the Johnnie Walker Red, Black and Blue labels, as well as Ballantine's, Famous Grouse and Chivas Regal. Connoisseurs claim the best-tasting whiskies are found only among the single malts. Flavors and aromas in whiskies can include sweet, smoky, spicy, honey, brine, tar, cured leather and even cured meats.

One of the most exotic -- and, at $2500, most expensive -- bottles on the market is Macallan's just-released 1946 whisky. It's remarkably smooth and rich, and, for Macallan, unusually peaty. That's because in the post-war era, coal wasn't readily available, so the distillery used peat in place of coal.

The word "whisky" is a corruption of the Gaelic phrase "uisgebeatha," meaning "water of life," and the way the stuff is consumed here, it might as well be water itself. A "wee dram" (a small shot) seems to accompany most things, whether a bit of shortbread, a snack, a meal or a smoke. A "gentleman's measure" is a significantly larger dose -- and presumably saves a gentleman the embarrassment of having to ask for a second serving too quickly. Another important Gaelic word in these parts: "slainthe" (pronounced slange), the equivalent of "cheers."

Most of the distilleries are open to visitors, and Laphroaig welcomes us with a free tour and tasting. The process of making whisky doesn't vary much from place to place, though it is the minor changes that account for different flavors. Barley is soaked in water and left out to germinate. The process is stopped -- before roots and leaves begin to grow -- by drying the grain. Some distilleries use coal, while Laphroaig and a few others burn peat, the fragrant local soil, which imbues the grain with smoky flavors. Once dry, the grain is cracked and ground and then fermented in giant tanks with the addition of yeast, and the resulting "wort," with its funky smell, is more or less beer. This low-alcohol product is then twice distilled and aged in oak barrels for several years or more, at which point it acquires the characteristics that make it undeniably Scotch whisky.

Laphroaig General Manager Iain Henderson explains to us that five key elements that affect the final product: the water supply, whether peat is used, the size and shape of the distillation vessel, the type of cask in which the whisky is aged, and the location of the distillery and its warehouse.

At Laphroaig, we are shown samples of peat, barley and the barrels in which the whisky ages. Prince Charles gave a Royal Warrant to this distillery, and one of the pair of casks presented to him, graced with his signature, is on display in the warehouse.

There's more to this region than just whisky, so we detour to the Islay Woolen Mills to look at local fine fabrics. The mill dates from 1883, but buildings have occupied this land since 1500. The present owner has been called upon to make clothes for films including Braveheart and Far & Away, and he just recently made tweeds for the Emperor of Japan, whose daughter came in to the store. He sells everything from blankets to jackets and trousers, and I purchase a luxurious black cashmere scarf for about $20. 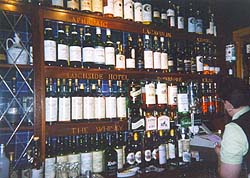 After a meal of oysters, seafood stew and local lamb at the nautically-themed Harbour Inn, we retreat to the nearby Lochside Hotel, a small two star property famous for its 400-plus bottles of whisky, where we sip and compare a tiny fraction of the bar's offerings while locals shoot pool and play video games and darts.

Traveling from Islay to Orkney, the northernmost part of Scotland, we fly over dozens of miniature islands, one like a perfect golf hole, lushly covered in grass, maybe a four par length, before landing at Kirkwall, the largest town on Orkney's main island. From our bare-bones hotel, we have a stunning view of Scapa Flow, a waterway which figured prominently in World War II when a German U-boat sank the HMS Royal Oak, taking the lives of hundreds of soldiers. 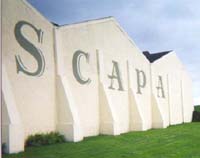 "Churchill Barriers" connecting several islands were erected from stones, each weighing five to ten tons, to keep the Germans out of this area during the war, but they also serve as bridges allowing easy travel from one part of Orkney to another. We cross several of the barriers on the short drive to the Creel Inn, recipient of a Taste of Scotland award as well as a rave review on the from novelist Will Self. Scotland may not be as hot as London in the culinary world, but a recent emphasis on local foods has given rise to some fine dining establishments. The chef-owner buys his seafood and other goods locally. His idea is to find good, natural products and not mess them up, and he succeeds admirably. Creel serves half a dozen local cheeses and stocks a variety of whiskies, including Scapa, a light and smooth single malt made in the region, and the distinguished, highly complex Highland Park.

Also worth a visit are the cliffs at Yesnaby, spectacular and perilously high over the Atlantic. Waves crash thunderously even on a calm day; in storms, the spray blasts in several hundred feet.

Aberdeen is the final stop on this quick tour of Scotland. We visit the Glendronach distillery not only for a tour, but also for the night: the Glendronach House, a classic country stone cottage, elegant with manicured gardens, has a dozen guest rooms available to the public. The estate dates back to 1696, when it was known as Boyn's Mill; the present house was built in 1775. Glendronach, which means "valley of the blackberries," offers tours with tastings, and its gift shop sells private-labeled heather honey, mustard, fudge and marmalade, all flavored with the rich, slightly smoky house whisky.

There's another flavor, albeit less universally loved, in Scotland: haggis, the national dish. And it's at the Thainstone House Hotel, on my final night, that the haggis (minced sheep organs cooked inside the animal's stomach lining) finally catches up with us. There's an elaborate presentation of the dish: a bagpipe player recites a traditional poem after serenading the chef as they circle the table several times. Haggis is then served with neeps (turnips) and tatties (potatoes). I reluctantly try a bite, and it's just awful, like liver-flavored meatloaf. But I quickly kill the taste with a dram -- a gentleman's measure, not a wee one -- and a bit of sugary shortbread, the other national food, and all is right again.

Chris Rubin has written about food for publications including Saveur, Food Arts, Bon Appetit, Los Angeles Magazine, The Los Angeles Times and the San Francisco Bay Guardian, and is the restaurant critic for The Downtown News in Los Angeles.