The latest craze on the cafe scene is...Tea! But not just any tea -- Yogi Tea. That fact may seem ironic to some, but not to coffee and tea expert Tom Kaplan, who helped bring Yogi Tea from health food stores to the public at large. Kaplan, who pioneered not only fresh-roasted, gourmet coffees, but also balsamic vinegar and other once exotic, now obligatory ingredients on the Los Angeles culinary scene at his Hugo's restaurant, calls Yogi Tea "the most exciting discovery" he's made in more than 15 years of working in the food business.

While it's already well-known and widely available on the west coast, Yogi Tea is rapidly spreading around the country -- and beyond, Kaplan says.

Brewed from the ancient formula brought from India to America by Yogi Bhajan, a master of Kundalini yoga, Yogi Tea has been called the "coffee of the ancients." The Yogi Tea Company was founded a little more than a decade ago by Guru Simran Khalsa, a Sikh who practices and teaches meditation and Kundalini yoga. Khalsa managed a small health food store in Los Angeles in the early '80s, where he would make pots of tea using the ancient blend of cinnamon, cardamom, cloves, ginger and black pepper. After many requests from customers who wanted to take the tea home with them, Khalsa packaged this blend, and the Yogi Tea Company was born.

"Yogi Teas give you energy with no letdown, a mild feeling of euphoria from the combination of the spices," says Brooklyn-born Khalsa, who adopted the Sikh faith in 1978, and wears the traditional all-white garments. "Cloves take away pain, cardamom aids digestion, cinnamon is good for the bones, black pepper stimulates the digestive process, and ginger is an Ayurvedic panacea, giving strength and energy. And the synergistic effect of all the herbs is more than the sum of its parts."

Kaplan, too, says the all-natural ingredients of Yogi Tea are beneficial to the body, explaining that each ingredient serves both a seasoning and therapeutic purpose, according to the principles of Ayurvedic medicine, an ancient Indian system of well being known as "the science of health," still practiced in India and elsewhere throughout the world today.

Ayurveda blends diet, exercise, meditation and breathing with other guidelines for proper living. The goal of Ayurveda is balance through health, inner harmony, peace and longevity. Yogi Teas are made with those principals in mind, and ingredients are selected carefully for their effects on the body. 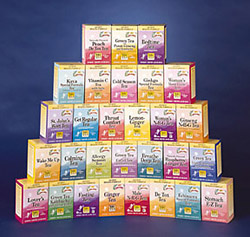 Khalsa says the various Yogi Teas, with their carefully chosen ingredients, "Help improve the health of your bones, your blood, your colon, your digestion and strengthen the nervous system."

While western medicine may not acknowledge those benefits, Yogi Tea is naturally caffeine free (not de-caffeinated through a chemical process), offering an alternative beverage to the health-conscious among the coffee house crowd.

Yogi Tea is actually many different teas, which can be served in a variety of ways, from traditional tea bags to a loose, fine grind, which can be used in espresso machines, creating spicy Yogi Tea Cappuccinos when mixed with steamed milk (or soy milk, for those whose diets exclude dairy). Use of the espresso machine to make Yogi Tea began in 1991 at Caffe Latte, with Kaplan and Khalsa experimenting with new and different ways to prepare their tea. "We wanted to make this great beverage in a form that could be served in coffee shops and restaurants everywhere," Khalsa says.

Richard Brenner, owner of Highland Grounds, a trendy Los Angeles cafe, reports that up to 30% of his coffee and tea sales involve Yogi Tea. "It meets a need for non-caffeine and non-coffee drinkers," says Brenner, who has stocked the teas "since day one, January 1, 1990." Most popular at his cafe are the Yogi Tea cappuccinos and the green tea with Kombucha. "My customers order them because they like the taste," Brenner says. "The health benefits are a bonus."

Flavors for Yogi Tea Cappuccinos include Original Cinnamon, Tahitian Vanilla, Mango Passion, Egyptian Licorice, Maple Royale and Hazelnut Cream. Each of these contains five essential spices, gathered from around the world, in addition to its particular flavoring: cinnamon from China for sweetness and Madagascar for color; black pepper from Malaysia; cloves from Indonesia; cardamom from Guatemala; and ginger from Nigeria and China.