Day 2 of Jon and Calvin’s wine adventure in Napa begins.

After our morning walk through the deserted streets of Downtown Napa and our tasty breakfast, we had to get rolling right away, because the first stop was to be at a remote location, high atop Spring Mountain.   Cain Winery was our destination and Ms. Garmin informed me sweetly that it was a full hour’s journey from our starting location.  The drive was as scenic as I had remembered from a previous journey to Barnett’s winery with my son.   We were directed just so far, and then we had to rely on the road signs, because the rest of the way had not yet been charted by GPS.   We followed the arrows along steep inclines, reaching the visitor parking lot before anyone else, including our host.  The morning sun sliced through the mountain mist, beckoning a walk around the grounds.  We opened our doors in unison and immediately exclaimed… “Whoah, it’s freezing out here!”  Both in long sleeved shirts and sweaters, we walked about, taking in as much of the dazzling views as possible, until the shivering transferred up to our teeth.  Then it was time to wait it out until 10 a.m., in the car with its heater. 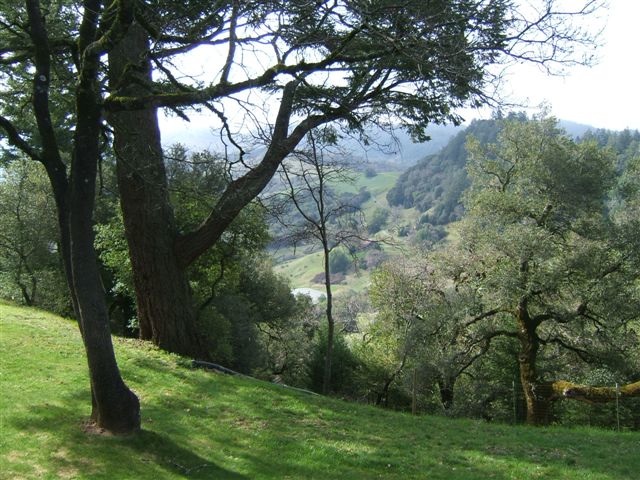 The reception facility had a beautiful stone exterior, featuring a sculptured wood tasting room with tall arched windows on three sides, allowing views of their vineyards in the valley below.  Our host (Holly) was a pleasant lady who had worked for several other wineries in her career, but seemed to have found a comfortable home with the owners of Cain.  Touring the facility went much the same as others I had experienced, with oak barrels stacked in a large warehouse type environment.   Magid had advised me in advance that their wine was “very soft and refined, French in style.”  I had read about the place in a few publications, so my curiosity was buzzing.   By the time we were able to taste the wine, anticipation was high.  After a few sips of the premium Cabernet called Cain Five, we politely excused ourselves from the rest of their visitors and headed for the next stop.  Refined… probably.  Yet to me (Mr. Unsophisticated), it was lacking the opulent (another great wine word), fruit-forward flavors which arouse my interest, and thus the tendency to purchase.

Next on the age

nda was Pride Mountain Vineyards, a mere 10 minute drive away.   This place was a rustic wooden mountain structure, and very inviting to enter.  We arrived right on time for our scheduled tasting and tour.  Two of my wine loving friends had suggested this place, and Magid felt it would be a more compatible experience for my palate.  They were right.  The ‘06 Pride Cabernet and their Reserve selection were both nice flavorful wines indeed.  I purchased a bottle of the Cabernet, just to be able to consume with food for a better assessment at a later date.   Pride does not sell to Magid's distributors, and thus it will have to prove worthy of their full retail price, California sales tax and inflated Winery shipping charges to merit any further purchases.   We will see.  They had some impressive Wine Caves, cut into the mountainside, making the tour worth the time and expense.

After a quick salad and sandwich at an out of the way pizza joint in St. Helena, we proceeded back toward Oakville.  I had read about a place called the Napa Wine Company, just next door to the “famous” Oakville Grocery Store.   There are numerous wine producers in Napa Valley who do not own the property, equipment and facilities needed to process, age and bottle their wine.   Napa Wine Company offers these necessary components to various local wine-makers who have the talent and initiative to produce fine wine, but not yet the “where-with-all” to create and market it.   Thus these micro-businesses utilize this Company’s facilities for developing their wines, and then market them on-site at Bonded Winery #9, a.k.a. Cult Wine Central.   It is a great place to sample worthy vintages from “up-and-coming” vintners.  We experienced wines from the likes of Fife, Jones Family, Downing Family and Pahlmeyer.   Many of these could teach some of the mass-production wine establishments “a thing or two” about impressive Cabernets.

There were two other stops on the way back toward Napa, Hess and Trefethen.  I had visited both before, yet thought them worthy for Calvin to experience.   After a full day, we came back "home" to rest-up for the evening’s dining adventure.  From previous episodes, it is pretty obvious that I have become a big fan of Mustards Grill, primarily due to their signature Mongolian Pork Chop dish.  I wagered with Calvin that it would be the best he had ever eaten.  He doubted it.  Organizing the trip back in Houston, I booked a reservation at Mustards, assuring myself (or so I thought) this pleasurable culinary delight.  A few days before the trip, I received a call from someone with this establishment informing me that their kitchen had recently suffered fire damage, temporarily closing the restaurant.  Knowing that Cindy Pawlcyn owned at least two other Napa Valley eateries, I asked if one would be serving my sacred dish.  The lady told me that Cindy’s Backstreet Kitchen would have it.   Naturally, the reservation was moved to this alternate location.

We drove into St. Helena and over to this restaurant’s truly “backstreet” location, right on time.  The place was packed with many customers who obviously had no reservations.  I was nervous.  Yet, in a timely fashion, someone came and seated us at a two-top, with tables so close you had to make an effort not to become involved in the neighboring conversations.   The menu had no mention of my sacred Pork Chops.  I became very nervous.  The waiter arrived, and before he could speak, I popped the question… “Where are the Pork Chops?”  He responded that they did not have them.   I was sickened.   I am definitely someone who will not allow such a matter to pass.  Sensing that something dramatic was about to happen and with face reddened, I stood up and found the manager without further ado.  “Deep breaths,” I kept repeating to myself.  The manager indicated to me that the lady who changed my reservation had been wrong.   I (as calmly as possible) requested that he resolve this mistake.  I was (after all) here all the way from Houston, Texas and not to be denied.  Sensing a California earthquake might commence from the serious look in my eyes, he told me that Cindy’s other restaurant named Go Fish was serving this dish, and he would call over to see if he could “get us in.”  My quick reply was “Please.” There was a quiet conversation that took place between these two restaurant managers, one that likely included the phrases “this lunatic” and “we may have to call the police.”  At its conclusion, he smiled and told me that there was a table awaiting us, just a few minutes down the highway.

Relieved is not an adequate word to describe the feeling.  We drove to Go Fish, walked in and were treated like VIP’s, immediately being seated and served.  The place was most exquisite and spacious, a much more comfortable atmosphere than the cramped and loud “Kitchen on the tracks."  Dinner was divine.  They even offered complimentary desserts for our trouble.  Calvin would not admit that these Chops were the best he had ever eaten.   If they were not, I really cannot imagine their superior.  He had to be "pulling my chain."  (Weren't you Calvin?) 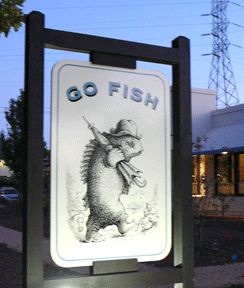 Regarding unfortunate reservation incident, I will conclude that the measure of a great establishment is not being mistake-free. Everyone makes them.  No, it is how well someone overcomes mistakes that really matters.   In this instance, Cindy and her staff receive an “A+.”  By the way, as of this writing, Mustards is back in operation.   And, Go Fish has pushed its way up on my Napa restaurants priorities list.  Calvin and I both noticed and admired their great looking Sushi on the way out.

Well, I thought that I would be able to complete this trip’s account in Chapter 2, but alas my word count has now exceeded Sally’s “snooze limit.”   So, at the risk of putting my three loyal readers to sleep, I will conclude Chapter 2 at this juncture.  Day 3 was quite memorable as well.   Again, with her gracious consent, the story will continue.