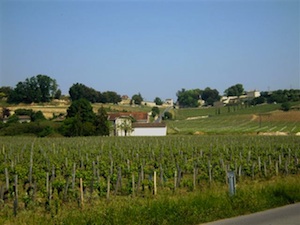 The visit at Chateau d’Yquem, although one of my favorite of the entire trip, came at a sacrifice.   It was not until the last month of my scheduling process that d’Yquem was successfully contacted, via suggestions by (friend of a friend) David Jones with Berry Brothers & Rudd (wine buyers for the British royalty).  Before that connection was made, an 11 am. tour had been scheduled with Chateau l’Evangile (a property acquired by Domaines Barons de Rothschild, the owner of first-growth Chateau Lafite Rothschild).  If the decision would have been another lesser heralded winery, it would have been much easier.  Yet, the girls at l’Evangile in Pomerol were only working until noon on that Friday, and no amount of coaxing on my part would entice them to stay over any portion of their afternoon off. “Zut !!” 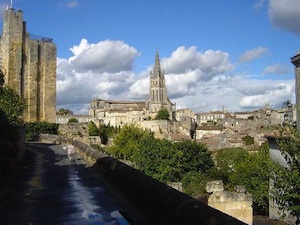 My 2 pm. appointment was at Chateau Gazin (unclassified, yet highly regarded), also in Pomerol, so that left me the cross-country drive from Sauternes (approximately 1 hour) and a couple more hours to explore, before arrival.  Ms. G took me through some extremely beautiful countryside, navigating my journey amidst numerous hillside vineyards, quaint towns and gorgeous river crossings.  This was indeed the “scenic route.”  On these roads, there were a sprinkling of… yes, directional signs.  The districts of Saint-Emilion and Pomerol were surprisingly well identified with road numbers and directional arrows to various villages.  The most beautiful sight of the afternoon was the town of Saint-Emilion.  On its outskirts were obvious manifestations of modern times, but on the streets in the center, I was taken back in time to 17th century France.  And the beauties of this village were no secret.  Lines of cars were parked along the roadsides in every direction, their occupants all crowding into the narrow streets and this ancient wonder’s cathedral, hotels, restaurants and novelty businesses.  Unable to find a reasonable place to park myself, I continued onward. 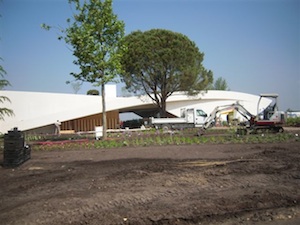 One of my intended stops along the way was at 1955 classified, first-growth Chateau Cheval Blanc.  Fortunately, I spotted it along my charted path, just a few kilometers west of Saint-E.  Immediately, I noticed a frightful looking construction project being erected on its grounds.  The stately old Chateau structure had been expanded to its north side with a space-aged plastered dome.  The lack of harmony between the old and new was unsettling, to say the least.  Cheval Blanc representatives had not even acknowledged my email requests for a visit, but this was in no way “sour grapes.”  Throughout the day, with everyone I spoke, their reaction was similar disgust or a more polite “rolling of the eyes.”  Someone allowed a famous modern-age designer, waaaay too much control. 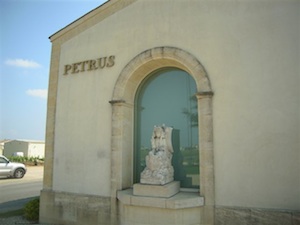 I explored the properties of Chateaux Le Pin, Petrus, l’Evangile and Clinet before my appointment time at Gazin.  These wineries were so close together that it only took minutes to travel from place to place.  And, much like the day before, my unauthorized explorations went virtually unnoticed.  I just smiled, waved and issued a cheerful “Bonjour” to everyone I encountered.  An amazing number of Asian visitors were noticed at each of these Grands Crus. 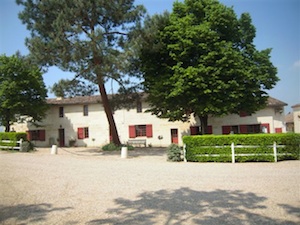 It was still early, upon my arrival at Chateau Gazin.  After parking under a shady tree, I walked to one of the support buildings for a restroom visit.  This turned out to be the residence of the woman who greeted me.  She only spoke French, so with my short request, I was ushered across her kitchen/dining room to the facility.   Returning, I noticed her big-screen TV was alive with colors of the “royal wedding,” just concluded, with the procession exiting the cathedral underway.  She pointed for me to be seated, while she watched, fully aware that my appointment time was at 2 pm.  It was amusing to view this coverage, being described in explicit French detail.  As the hour approached, she turned off the TV and escorted me to the visitor’s office.  She was obviously the secretary of the owner/proprietor Nicolas de Bailliencourt.

The story of Chateau Gazin was similar to many.  The property changed ownership frequently since its acquisition and transformation into an exclusive wine property in the late 1770’s.  A ship builder named Captain Bayonne and his heirs owned and operated the vineyard in the 1800’s.  By 1917, its current-day lineage was established through an acquisition by Louis Soualle, when his daughter married nobleman Edouard de Bailliencourt.  The heirs of Edouard would maintain ownership to current day.

Entering the visitor’s office, I met Nicolas.  As many of the French do when speaking English, he had a nervous habit of restating certain short phrases over and over to help the rhythm of his conversation make him appear more fluent.  He was a likeable fellow, yet explained that we should delay commencement a few minutes for the other couple on the tour to arrive.  We waited.  At 15 minutes past the hour, he decided that he would start without them.  We walked out the front drive to a point where the limits of his vineyards could be seen.  His prepared speech began.  Ten minutes later, the tardy couple drove up, with that sheepish “sorry-we’re-late” look.  It was then that I heard the words which caused my stomach to churn.  The guy (a Brit) admitted that he could not get his wife to leave the hotel room until television coverage of the day’s royal wedding had concluded.   That, coupled with Nicolas’ deliberate rewinding of his scripted speech, caused my discomfort.  I did my best to maintain composure in the face of such disrespect. 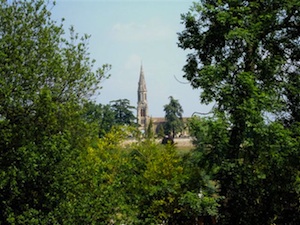 The winery had its own special nuances, with their utilization of concrete vats in the winemaking process.  The grounds of the vineyard were impressive, with a duck pond behind the Chateau, above which was a spectacular view of the town’s Cathedral.  The wine sampled was a barrel taste of the 2010.  Of course, it had years of aging before being ready for consumption.  My judgment was it was a weaker offering as compared to the other 2010’s I had sampled up to that time. 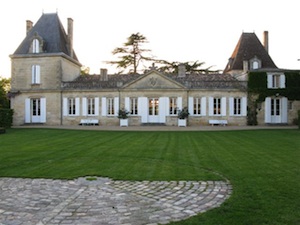 Less than a kilometer’s drive down the road was the treat of the afternoon, Vieux Chateau Certan.   Over a year ago, I started noticing the high ratings of this wine after having been served Chateau Certan de May at a Christmas party of one of my wife’s friends.  I was amazed at the flavor that such a Merlot based wine was yielding.  With “Certan” in both names, the properties must be related, reasonably thinking.  Turned out, they were located across the street from each other, but not related for centuries.  Vieux Chateau Certan typically supported elevated scores, but also a much higher price.   Thus, it was on the “must-visit” list.

From day one, Alexandre Thienpont, major family share-holder and proprietor, was my contact in arranging this visit.  He was the most accommodating person to my requests of any of those I called or emailed for appointments.  He even agreed to my request for a 4 pm. visit on a Friday afternoon, with no others scheduled along with me.   He did not have far to travel home, because he and his family live in the Chateau.  Compared to the other places that I had visited, this was the smallest, with only 14 hectares under vine (60% Merlot, 30% Cabernet Franc and 10% Cabernet Sauvignon).  Relating to character and flavor, it was a giant.

Bordered by such noteworthy vineyards as Chateaux Petrus, Petit-Village and l’Evangile, this property was in the heart of greatness.   Origins of VCC are not well documented, possibly dating back to the 16th century.  By 1785, the Demay family owned a larger estate known as “Sertan.”  During their ownership, some plots were sold into what would become Certan de May and Vieux Chateau Certan.  In the mid-1800’s, VCC was acquired by a banker who made improvements to the property and its Chateau.  By 1924, current day ownership would be established when the estate was purchased by a Belgian named Georges Thienpont, Alexandre’s grandfather.  Georges and his son Léon poured their time and money into the estate and the Chateau became Léon’s home.  Léon had several sons, the youngest of whom was Alexandre.  Similar to the compelling family story of Hugh Davies at Schramsberg Winery in Napa, the youngest son was deemed most interested in the vineyard and proved to his father, capable to take the reins of this estate as Gérant (manager of the family partnership).  Alexandre and his family moved into the Chateau in 1985, after his father’s death.

Driving up to the winery, I was early as usual.  I walked into the visitor’s office and the receptionist indicated that Alexandre was in the midst of a tasting with some other visitors.  I was happy to wait, but she rushed out into the building where the wine was stored, announcing my arrival.  Alexandre asked for me to come inside and join the ongoing tasting (“two birds with one stone,” no doubt).  It was much better to join a party than sit and wait for my turn.  (Following this phase, the other guests left and my one-on-one began.)  We tasted the 2009 out of a bottle and barrel tasted the 2010.  Again, both were a bit too young, but it was easy to tell these monsters would make the entire Thienpont family proud.  Alexandre had a sheepish grin on his face as he watched my expressions while we sipped.  These two vintages may take VCC to a new level of greatness in the realm of Pomerol, France and the world.  What impressed me was the fact that both wines averaged 85% Merlot, with a healthy dose of Cabernet Franc, Cabernet Sauvignon taking a “back seat.”  We did not sample the second wine, Gravette de Certan. 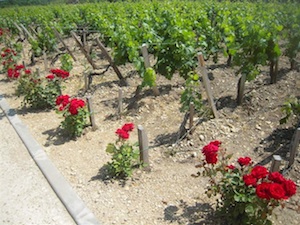 Afterward, Alexandre took me for a walk in the vineyards.  Neighboring properties are so close that in some cases vines just one row over belong to another label.  He told me that the soils vary so much within his 14 hectares that the planting locations for their varietals were critical.  I noticed limestone rocks atop each row, between vines, a testament to the mineral content in this terroir.   Without plastic tags on the support wires, I asked if he utilized “Sexual Confusion” (insect hormone designed to inhibit procreation).  He was not yet convinced of its worth, opting for normal applications of pesticides.   The VCC vine wires were a bit taller than most of the surrounding properties, with row spacing wider, accordingly.  Seeing what appeared to be a few Starlings flying about, I asked him how he dealt with this menace.  The response was that he did not, indicating that he just considered them a “tax of nature.”

We talked about his extended family, to which he must answer in their annual “shareholders meetings.”   These were sometimes difficult due to each family’s varying expectations about profits from their shares.  No matter how tense that these conversations become, nobody dares to step forward, attempting to excerpt power and control.  Ultimately they realize the intensity, vineyard prowess and winemaking mastery of their appointed leader.   Alexandre on the outside appears a quiet, meek soul, but inside is a savvy winery proprietor who treasures the legacy he was entrusted to preserve.

Departing this property, I slowly drove past numerous beautiful estates in the homeward direction dictated by Ms. G.  Pomerol and Saint Emilion were definitely on my “must-see” list upon returning to Bordeaux.  Again I stopped for my usual late-afternoon dinner of healthy yet comforting food, before retiring to the hotel for the evening.  Saturday, with wineries being closed for the weekend, meant it was time for the exploration of the City of Bordeaux.  This was an all-day affair which proved most interesting.  My next chapter will share these experiences and observations of that adventure.