The final day had arrived.  Everyone popped out of their bedrooms when the wake-up announcment came, except Bob.  He was given some additional time consideration, due to the illness factor.  Yet, upon the final knock at the door, he wearily announced that he would not be joining us.  So, it was only three of us for this day’s Right Bank wine adventure.   Our very first stop was in downtown Libourne, where the administrative offices of Château La Fleur-Pétrus were located, along La Dordogne River. 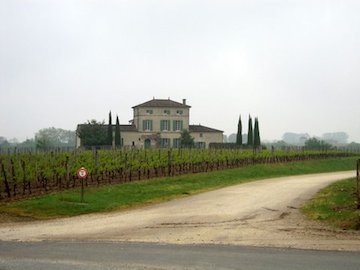 In early emails, I had asked our host Frédéric LOSPIED, for the GPS coordinates of this spot.  He only offered a cavalier response that the address he forwarded would be easy to find.   So, as anyone who knows me might expect, I freaked.  I found it on Google, then created a highlighted map on how to navigate through the twisted one-way roadways of town.  It was committed to memory, since I knew it would not be possible to stop and consult during driving.  We arrived without error and had only parked a few minutes along the river’s embankment, when Frédéric walked up and said we must be his 9 am. appointment.  He asked us to follow him through town, to the location where we would first assemble.  The property was located across the roadway from the famous Château Pétrus.  There  was an old priest’s house, sitting amidst 4.5 hectares of vineyard property.  La Fleur-Pétrus was acquired in 1953 by Jean Pierre Moueix, owner of Châteaux Pétrus and Trotanoy. The estate was enlarged with the acquisition of vines from Château Le Gay in 1994.

After a brief look, we followed him to the Chateau and winery facility, located very near the Pomerol Church, site of the “peep-show” days before.  It was a modular looking stone building, surrounded by gravel drives and parking.  We were escorted into a long conference room, with a table which almost matched its length.  This was to be the location for tasting.  Dave and Frédéric talked a great deal about the Moueix dynasty of vineyards and wine labels.  Suffice it to say, that kind of a conversational romp was in Dave’s wheelhouse.  We were then presented with tastes of several 2012 vintage wines from various Moueix properties, including Trotanoy, which was an unexpected bonus and a treat, with its high ratings in this troubled Bordeaux vintage.  The Trotanoy’s nose was of dark fruit and pronounced minerals.  Its palate was powerful, meaty and very approachable for such a youngster.  Our taste of La Fleur-Pétrus was almost as good, with a musty, rich dark cherry aroma and a powerful tanic finish.  This one would need much more bottle time before consumption.

Charles “Bear” Dalton of Spec’s Warehouse Liquors in Houston had recommended that we visit Chateau Canon, even though the wines were not as highly rated as many of the other spots on our list.  Not long after our arrival at this enchanting property, we discovered the validity of his assertion.  Our lovely host, Geraldine, met us as we entered the manicured grounds of the winery.  From its entrance, the entire town of St. Emilion was visible, and not far away.  The estate was established in 1750 by Jacques Kanon.  It changed owners several times before suffering a blight of root rot in the 1990’s.  The property was acquired by the corporate giant Channel,  in 1996, two years after their acquisition of Second Growth Château Rauzan-Ségla.  Replanting 50% of their 34 hectares of vineyard property followed, in phases, taking 15 years.

Geraldine started the tour of the winery and storage areas, as we descended one level.  The new direction of the estate has the vintages improving with each weather-worthy crop growing season.  After touring the impressive lower chambers, we decended a small stairway into a labrynth of breathtaking caves.  Beneath the property is a sub-surface limestone quarry, for which the stone of all the structures of St. Emilion was utilized.  The quary was not open-cut, but mined similar to the way the Catacombs of Paris was created.  Blocks of limestone were removed, leaving massive rock columns at intervals determined to be substantial enough to support the layers of stone and earth surface features above.  During the World Wars, the caves served as safe havens for superior vintages of St. Emilion wines to be hidden from invading forces.

Returning to the surface, we walked over to the quaint building (appearing old, but only constructed in 2000) where our wine tasting was hosted.  There we were offered samples of the 2008 second wine, named Clos Canon, and the 2006 Grand Vin.  The Clos Canon was pleasantly fragrant but quite a light expression.  The Chateau Canon had a nose of dark cherry and a mineral-ridden tanic bite which begged for years and years of aging.  Even though the wines were somewhat disappointing, the tour and history of the property was most interesting, and as Bear guaranteed, worthy of the time invested in the visit.

As we exited, I plugged in the GPS coordinates of the next property we would experience.  Getting there involved a trip along St. E’s “ring road,” the trail which allowed a return to the lower elevations of the town, with one-way passages upward toward the Monolith Church.  There were two incredible adjoining estates that we would visit in the afternoon, possibly the most impressive properties we would encounter in all of the Right Bank.  Bobby, we are sorry you missed it.  Stay tuned…