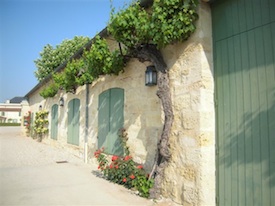 The new travel alarm clock, purchased on-line for this trip, began to pulsate… not my favorite tone but effective.  Then it was into the micro-bathroom where the shower was fashioned like a see-through teleportation tube out of Star Trek.  Though tiny, it worked.  Breakfast was surprisingly decent, with delightful croissants, fruit, cereals and sliced turkey for my protein.  Thankfully, France has now banned smoking in restaurants, so dining “in the clouds” is no longer a concern.

Within my allotted time period for “morning stuff,” I was in the car and setting the GPS for a global coordinate that I received off of the internet (not always reliable) for Chateau Palmer, since the winery had no helpful input to offer.  Upon departure, my GPS girlfriend told me to turn south on the loop road…not cool.  From my map study, the destination was definitely to the north.   I pulled off the road and started belabored breathing, while pondering solutions.   Quickly I looked for the coordinate information of my next visit, provided by nearby second-growth winery, Chateau Rauzan-Ségla, less than two kilometers away.  If unable to find my way from there, I did not deserve to be on this trip…  The new information was inserted, and with her indication that the direction was to the north, I was somewhat comforted.  Thus, my journey began around the city’s perimeter and northward into what appeared to be a continuation of the east-Texas piney-woods, observed the day before.  Houses and small businesses were spotted along the narrow roadways in an array of styles.  Except for the signage with unfamiliar wording, I might have assumed being transported back along Texas Interstate 59 East, with Billy Bob’s Automotive here and Daisy Doodle’s Day Care there.  Where would the actual Bordeaux wine country begin?   After driving 15 to 20 kilometers further, the pine trees cleared away and vineyards appeared.   Numerous round-abouts were navigated until I noticed a rare roadway directional indicator which pointed the way to Pauillac, out of the spider web of paths exiting one of these crazy interchanges.  Realizing that Pauillac was much farther north than Margaux (home of my first two stops), I concluded that my second group of GPS coordinates was also incorrect.  Again, I pulled into a driveway, most disgusted and angry.  Explicit “French” was flying about the confines of the car for several minutes.  Then as calm and reason prevailed, my mind determined another way through this dilemma.  In my possession were enlarged copies of the major roadways around the Margaux wineries, from a very useful book purchased for a mere penny off amazon.com.   Numbered roadways were shown, and by observing various intersections near the wineries, I could place myself close enough to find my way if only the GPS could assist.  Thankfully, my new Garmin had the ability to take me to these intersections… bullet dodged.  With the new data programmed, “Go” was pressed, and another route was formulated.   It was back to the previous round-about and onto an unmarked roadway traveling in the direction of the Gironde estuary.   A few meters further, “Ms. G” ordered me to turn right.  I looked for a paved road, but there was only a rural drive path (the kind with grass growing between the two graveled driving surfaces where the tires of a single vehicle could travel).  My frustration level had already reached its maximum limit, so I just muttered “what the hell,” and turned. 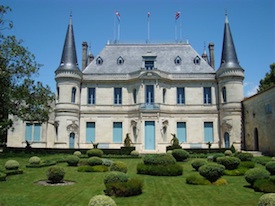 The pathway took me through rolling meadows, along unmarked vineyards and into unimaginable rural settings.  I even passed an old abandoned plaster/stone building structure which looked to have been bombed back in WW2, and never repaired.  Finally, it led into a small village where Ms. G’s series of turning instructions made me believe there was still hope.  Minutes later, I was on one of the programmed roadways, heading for the requested intersection.  My GPS girlfriend had pulled me through.  And, just before arriving at that junction, the scenic views around the entrance to Chateau Palmer emerged (previously pictured on a Google satellite search).   I had arrived, and only 5 minutes before my scheduled visit.  Dionysus (Greek god of winemaking) was watching over me.

Chateau Palmer is situated east of the D-2 roadway, running through Margaux.  Its vineyards abut those of its more famous first-growth competitor, Chateau Margaux.  Both are very near the Gironde estuary.  Margaux is the name of the viticultural region (situated closer to the City of Bordeaux than most on the estuary’s “left-bank”) where numerous vineyards and wineries exist, but it is also a small community with clusters of residences and various businesses.  There seemed to be a curious shortage of retail shops, restaurants and hotels within this area, considering the density of development.  Yet given the privacy that most of these wineries seek, this was understandable. 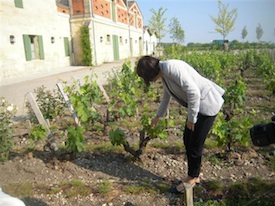 On Palmer’s grounds, there was no shortage of signs indicating where visitors should park and the building they must enter.  My on-time arrival was met with news of the tardiness of others in the tour, set for 10 am.  Our host, Celine CARRION (the French often use all caps for last names) made the announcement with feigned surprise.  No doubt they were lost, since the party did not arrive for another 45 minutes… and any wonder.  (I found the exact GPS coordinates for Palmer on my Garmin device and did present them to Celine before my departure.)  The tour proceeded on time; as well it should have, considering the schedules of everyone else.

Purchased in 1814 by its namesake, retired English General Charles Palmer, the property was improved and enlarged from 50 hectares of planted vineyards to 82.  In the 1840’s, Palmer’s personal economic difficulties forced him to sell the property at a loss.  A fungus called oidium attacked the vineyard during the period of the 1855 Classifications, possibly resulting in Palmer’s lower third-growth rating.  The Chateau building was constructed in 1860, but was never utilized as a residence by any of the subsequent owners.  Beset by numerous problems such as WWI and the Depression which followed, the ownership changed a few more times until 1938, when purchased by the Sichel and Mahler-Besse families, who currently own, farm and operate the property.  Today only 52 hectares are planted with 47% Cabernet Sauvignon, 47% Merlot and 6% Petit Verdot.  Annually, they produce approximately 12,000 cases of Chateau Palmer and 8,000 cases of their second label, Alter Ego. 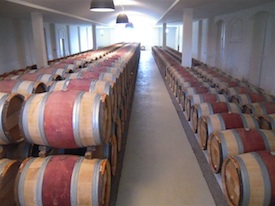 The winery’s equipment and storage facilities were located in above-ground structures, cooled with air-conditioning units.  Much like the previously visited winery, the barrels contained the 2009 and 2010 vintages.  I was privileged with tastes of both.  The ’09 was a bit smoother than the highly tannic ’10.   In my opinion, both will require numerous years in the cellar before being approachable.  Inside one of the barrel storage buildings, a semi-circular glass window was positioned to afford a great view of next-door Chateau Margaux.  The owners had it installed to emphasize to the staff their desire to emulate the greatness embodied in their classy neighbor. 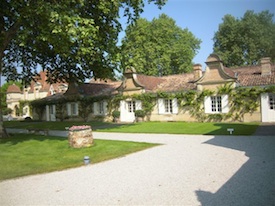 During my months of planning this trip, there was a large gap in between the Palmer visit and the one scheduled for mid-afternoon at Chateau Latour.  Thus I sought to find a nearby, yet respectable property to visit, which would not result in late arrival at the afternoon appointment.  According to Robert Parker’s ratings, second-growth Chateau Rauzan-Ségla was an acceptable substitute for Chateau Margaux, whose staff had rejected my request for a visit.  And, it was just on the west side of D-2 from Palmer.  I was bold in asking them for a 12 noon appointment, tossing out the “I’m a wine writer” card in my email for consideration.  Remarkably, their response did not question the visit’s timing, only the validity of my credentials.  They wanted to read some of my articles before agreeing to the appointment.  So, I chose last year’s pieces on Schramsberg and Eden Canyon, copied the links and sent them in “for approval.”   Their response was not immediate (of course), no doubt to make me nervous.  After a week and a half, an email appeared on my computer with their reply.  My work was deemed acceptable, although they did not offer any input on how close the decision was… 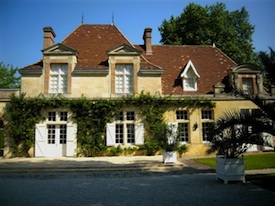 Even though the Chateau was not as stately as Palmer’s castle across the roadway, the property was on the whole much more beautiful.  The buildings and landscaping were very impressive.  Architecture was all of similar design, with lovely vines and flowers adorning the structures.  On this visit, I was again treated like royalty.  No others were scheduled to interrupt my visit with the lovely Sandrine BEGAUD, director of Public Relations.  We strolled the grounds of the facility where I learned that the vineyard and winery were created in 1661 by Pierre des Mesures de Rauzan.  The estate was held by inheriting families but divided into two separate properties by the time of the 1855 Classifications.  In 1960, it was sold to the negociants Eschenauer, who made substantial improvements to the property, operated the winery and maintained exclusive distribution rights for their wine.  Owned by Chanel (as in “Number 5”) since 1994, it supports 51 hectares of vines, 61% of which are planted in Cabernet Sauvignon, 35% in Merlot and the remainder in Cabernet Franc and Petit Verdot.  The “grand vin” yields 8,000 cases annually, and high quality has been maintained.

Sandrine took me through the above ground winery and storage facility, carefully explaining some of the extra care taken in the production of the wine, such as racking with egg whites.   The sediments collect in the stirred-in egg whites (inside each barrel) which allow them to be removed as the whites converge back together after the mixing movement concludes.  She touted it was the best, and most expensive process for achieving the wine’s ultimate purity. 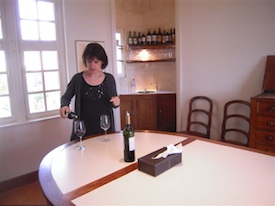 We only sampled one of the wines, a 2006 vintage.  In my judgment the wine, although decanted from the early morning, was still a few years away from prime-time.  It was definitely not a big, bold wine, and thus harmonious with the reputation of the products of Margaux.  It did have characteristics worthy of the decent ratings it has achieved.  The tasting was in a quaint upper floor tower-like room, which provided a nice overview of the property.  The experience was memorable. 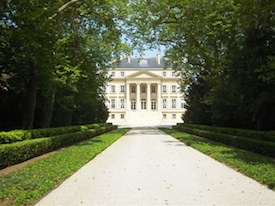 Noticing that ample time remained in my schedule before the next visit, I decided to sneak onto the two nearby estates which had rejected my requests for visits, Chateau Margaux and second-growth Chateau Ducru Beaucaillou.  Now that the “lay of the land” was becoming more apparent, the GPS was not necessary for me to find these properties.  My blown-up maps worked well.  None of the previous vineyards seem to be that well guarded, so I acted “like I owned the places,” parking and walking about without asking permission.  And, as suspected, nobody seemed to care. 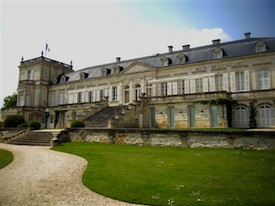 Even without being able to enter the confines of the wineries, exploring those sacred grounds was so very impressive.  I merely imagined the remaining greatness I had been denied.

At the conclusion of my snooping, I nervously returned to the car, hoping that my GPS device would take me to Chateau Latour without any continuing trouble.  And, yes, earlier I did provide Sandrine at Rauzan the winery’s correct global coordinates for offering to the next visitors who requested them.  Thankfully, this would be the last “fly in the ointment” of my Garmin system for the balance of the journey.   That afternoon held as much excitement for me as any on this wonderful trip.  Accounts of it will be forthcoming.