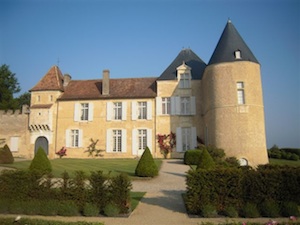 Just over a year ago, my wine buddy Dave Belding recommended that I read a book called Billionaire’s Vinegar, in which someone had claimed to have found a case of 1787 Chateau Lafite, purchased by, but never delivered to Thomas Jefferson.  It was a compelling novel.  The historical significance of the book centered on Thomas Jefferson’s actual journey to Bordeaux during that year, acquiring numerous wines for shipping back to the USA.  Among the Bordeaux wines that Jefferson cherished were Chateau Lafite, Chateau Latour and Chateau d’Yquem.  Having heard about the first two, I certainly intended to visit those left-bank properties on this adventure.   Yet, because of the fact that Jefferson acquired so many bottles of Sauternes wine from d’Yquem for his own cellar and “thirty dozen” for a good friend of his named George Washington, interest in this estate was triggered.  My first stop of the third day would thus be at this first-great-growth or Grand Première Cru designated winery in the Sauternes appellation, south of the city.

With coordinates entered and the journey underway, it was a picture perfect day.  Some comfort was taken with “Ms. G’s” initial instructions.  Just beyond where I had turned off the highway for Smith-Haute-Lafitte, a toll road commenced.   There were booths, from which tickets were extracted, designating the driver’s point of origin.  Thus at the exit, an accurate determination of kilometers could be charged.  Could it be that the French had finally devised something sensible?  Before long, my exit was announced, and I turned off the thoroughfare onto a loop road.  As the pavement straightened, a number of toll stations appeared ahead.  I looked for the one where a toll booth operator could take my money and offer change, if required.  Pulling up closer, the bitter realization came that it just could not be that easy.  Not one of the stations was occupied by a person.  There was no slot for inserting money.  My credit card was offered, and promptly rejected.  Last resort was a debit card, brought along for ATM cash withdrawals.  Holding my breath, the card was inserted.   Miraculously, it worked. Twas just another example of numerous frustrating French roadway peculiarities.  If that card would not have been along for the trip, I would have probably still been sitting there, or more likely sought by police after breaking off the wooden barrier arm. 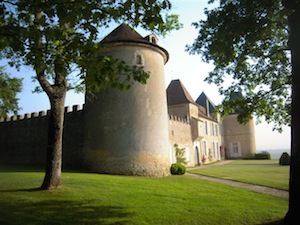 The meandering roadways through the hillside vineyards of Sauternes were beautiful.  Many turns onto unmarked paths were made, passing one majestic estate after another.  Then, atop the highest hillside in view, a lone stone castle (surrounded by vineyards below) appeared as my obvious destination.   Portions of the building were not fashioned similar to the Chateau castles that I had seen the day before.  Some sides were constructed as if the property had once been a medieval fortress, with walls designed to repel unwanted invasions by roving bands of war-mongers.

Owned by a family named Sauvage d’Yquem in 1593, this estate (dating back to the early 12th century) was transformed into a vineyard property with a heralded reputation for fine sweet wine.  After regaining ownership lost in the French Revolution, a female heiress named Françoise-Josephine married Antoine de Lur-Saluces.  The Lur-Saluces heirs were proprietors of the estate until 1999, when family shareholders sold out majority interests in d’Yquem to a conglomerate corporation (LVMH, Louis Vuitton and Moët Hennessy group), which by 2004 deposed family leadership, entrusting management to Pierre Lurton from its similarly controlled estate of Chateau Cheval Blanc.  Chateau d’Yquem today has over 100 hectares under vine, made up of 80% Semillon and 20% Sauvignon Blanc.  “Y” is the name of their lesser produced dry white wine.

Parking my car and again early for my appointment, I began walking the grounds adjacent to this impressive castle.  I envisioned stepping on turf which had been trodden by our third President, centuries ago.  The Chateau had been constructed in phases, the older section without windows, bearing shear stone walls.  Newer components had features of a more modern era, with doors and windows.  A stone fence separated the winery and Chateau from the vineyards. 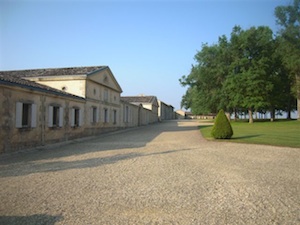 As my appointment time arrived, I returned to some of the more modern building structures nearby, where the wine-making, barrel storage, administrative offices and banquet halls were located.  This was where I met my host, Anne, for a VIP solo tour.   My first question to Anne was, “Did Thomas Jefferson ever visit Chateau d’Yquem?”   Her answer was that unfortunately, he did not.  He only purchased wine for shipment from negociants in Bordeaux.  I could hardly have been disappointed, because unlike Th/J, I was able to tour the property myself.  We walked around the Chateau, where she explained the phases of its construction.  Like many others, it was not the residence of anyone, just a place for formal gatherings, luncheons and parties with the likes of much more important folks than “little-ole-me.”

The vineyards were being tended by their staff of 40 full-timed workers.  Unlike many estates in the region which hired the likes of University of Bordeaux students to pick during harvest, the process of picking grapes for d’Yquem is much more intricate, requiring as many as 200 people (mostly family of the full-timed staff members) who have been trained in which grapes can be picked, and exactly when.  Harvest occurs in multiple phases, and much later than the rest of Bordeaux. 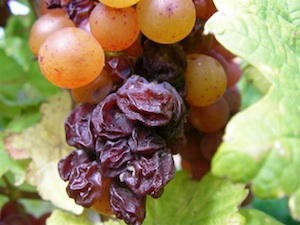 What transpires upon this hillside was fascinating to learn.  In Sauternes’ own microclimate, the morning mists created from thousands of hectares of pine trees to its south and west, along with moisture from the nearby Ciron River combine to boost the over-ripe grapes’ deterioration by means of an otherwise feared vine parasite called Botrytis Cinerea, known as the “Noble Rot.”  This rotting condition of grape clusters is never uniform, so only grapes which enter intermediate rotting stages are deemed as ready for picking.  These become light brown with rough porous skins when the contamination invades the pulp, shrivels the grape, increases sugar and transforms the flavor.  Experienced pickers know which ones to pluck, when, and exactly how to do it efficiently, harvesting in phases.  As more and more grapes on each cluster reach this precise level of rotting, they too are harvested for temperature-controlled fermenting into wine. 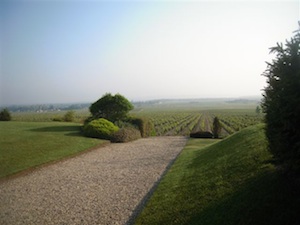 The great fortune of Chateau d’Yquem is its position on the highest hill, in the epicenter of this environment, assisting in its domination in quality over the others of this very limited region.  Yet these climatic conditions are fragile, endangering perfection when too dry (halting the rot) or too wet (ruining the concentration of the grapes, a universal problem in all vineyards).  Some years the yield is a single glass of perfected wine per vine.  And other years as recently as 1992, the entire vintage must be eliminated.   Yet in the words of Alexandre de Lur-Saluces, last of the family proprietors, “You can only gain everything by accepting to lose everything.” 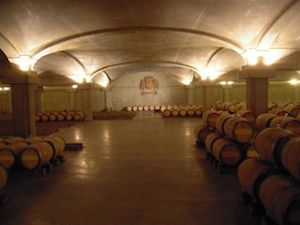 We decended into the subsurface chambers where the wine was created and stored.  The features of these areas were regal, with cast-in-place concrete columns, arched-ceilings and walls.  A d’Yquem family crest adorned the walls of the barrel storage chamber, which seemed much more spaceous than required for the amount of wine being aged at that moment.  Anne told me that following each harvest there are four separate pressings to extract all of the juice.  After 2 to 8 weeks of temperature controlled barrel fermentation, the wine receives its first blending.  Next comes 30 months of aging in 100% new oak, followed by a second blending.  Gelatin is used in the “fining” process, before bottling.   The wine is stored at 53 degrees.  She indicated that 57 degrees is the temperature that the wine should be served for optimum flavor.  Unlike the red wines of Bordeaux, premium Sauternes wines will remain unblemished in the bottle (properly stored and preserved, of course) for hundreds of years.  The amber liquid does darken, however, as the decades pass. 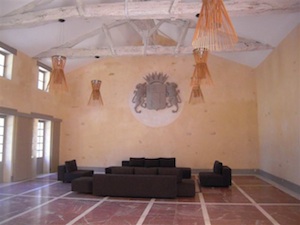 Following my tour of these chambers, the winemaking equipment and laboratory, the moment of truth had arrived.  We ascended to the ground level tasting room.  Anne pulled out a bottle of 2006 d’Yquem from the cooler and poured a glass of it for me.  The nose alone was hypnotic.   Essences of peach, pineapple, pear, orange and maybe a touch of honeysuckle danced aound in my nasal passages.  Anticipation was high, as the glass touched my lips and the stem was slowly raised.  The taste was as spectacular as the aroma had been… heavenly. Not a drop was wasted. At that very moment, not that far away, Prince William was making final adjustments to his military uniform, preparing for a ride to Westminster Abbey for his long anticipated appointment with the Archbishop of Canterbury and a young beauty named Kate.  I stood there with my eyes closed, emmersed in the wonderful finish this nectar had offered, as if light-years away.

Regretfully the tour concluded and I returned to my car for programming Ms. G with my right-bank data.  Her route would lead me through some incredible rural countryside vistas, as I traveled to Pomerol, my afternoon destination.  This day held much more in store…

The Billionaire’s Vinegar: The Mystery of the World’s Most Expensive Bottle of Wine  by Benjamin Wallace