Our little group of wine buddies (Calvin, Dave, Bob and me) concluded that we needed to take another trip to Napa, especially to indoctrinate our newest member Bob into the realm of our Napa adventures.  So we met one evening for a wine-fest dinner to plan the trip.  Schedules allowed us to depart on March 9 and return on March 13, just before the onslaught of the Spring Break hordes.  Yet, as our departure drew near, Bob was beset with an unfortunate double-dose of family tragedy, forcing his cancellation.  But, just like on Broadway, the “show must go on.”  And, it did.

We returned to the comfort of familiar “digs” in Calistoga, renting the lovely Rose and Ivy Cottage, offered by Theresa Young on VRBO.com.  Creatures of habit, we naturally retained the same room assignments from our previous stay.  Thursday morning we arose and consumed the wonderful dark roast coffee that Theresa had supplied, and then it was off to our beloved Café Sarafornia on Lincoln Ave.  Those egg-white omelets with spinach and sun-dried tomatoes were epic, just as I remembered from a year ago. 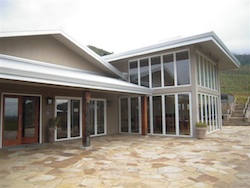 Shafer Vineyard was the first stop on our winery visit agenda for the day.  The manicured grounds and modern structure of the winery and tasting room were impressive.  The place seemed as “brand new” as it had on our last visit, well over a year ago.  I could not even spot a newly constructed spider-web.  It was as inviting as a shiny green apple.   Just like before, the glass encased tasting room table was adorned with sparkling glasses, promotional literature and palate-cleansing crackers.  They wanted the experience to be flawless.   And, it was. 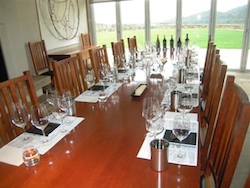 Shafer’s ‘08 Chardonnay, although not my preference, was bright, crisp and fruity… as eye-opening and appealing as the worthy “Chard” we had tasted at Hanzell Winery, last trip.  Being the designated driver, I would not have dared drink each generous portion in front of me, so I poured the balance of mine into Calvin’s glass.  The most surprising taste for me was the 2007 One Point Five.  Robert Parker’s RP-93 rating of that wine had me expecting a product deserving of that designation.  My opinion, however, was that it deserves a couple “clicks” above that figure.  Big fruit and a mellow disposition were prevalent, without a trace of overpowering oak.  Nice indeed.

Shafer’s ’07 Relentless (their Cab/Syrah blend) managed a 95 point RP rating.  To my taste (and I do love Syrah) the point awards should have been swapped with the One Point Five’s.  It was indeed a beauty.  Finally, we tasted the ’06 Hillside Select.  This wine remains a blissful dream, no mater which vintage is tasted.  Needless to say, there was no remaining purple drop in that glass, at the conclusion.  Our tasting ended with a kind appearance by Elias Fernandez, Shafer’s head winemaker.  He graciously spoke a few words and answered all questions that our tasting group had for him.  This was similar to the surprise visit we received from John Shafer on our last visit.   Celebrity sightings may be a part of the program.  For $45 per person, there definitely should be some kind of premium features. 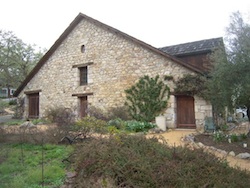 Next stop was a winery new to us, Seavey Vineyard.  Back in the thickets of Conn Valley is where we found their winery.   My GPS girlfriend brought us almost all the way.  We kept traveling down the road until the proper address sign was posted on a driveway.  Seavey’s facility is fairly basic, with a barn-like structure housing the winery, tasting room and offices.  We were greeted by Alex, in coat and tie, but otherwise informal.  I had spotted Seavey on an eRobertParker.com search for wineries in this area with superior ratings.   The 2007 Seavey was awarded a 96+, so that captured my attention.  Sampling the wine aroused my taste buds, as well.  Wowzer what a beauty it was, even at $95 a bottle.  Big dark fruit, enticing aroma and a flavor/finish which puts this one on the “honor roll.”   We also tasted their 2005 Caravina Cabernet, which was no shabby product.  Dave purchased some bottles of this, and we had it at one of our dinners, later in the trip.  It was extremely nice, and supporting a much more reasonable $65 price tag.   Seavey proved to be one of the more pleasant surprises of this adventure.

Leaving the winery, we found that there was enough time to grab a sandwich.  Dave knew that the Sunshine Foods Market in St. Helena had a deli counter, so we sprinted into town to give it a try.  Truth be told, their sandwiches were even better than the ones created at Soda Canyon Deli on Silverado Trail.  We did return to the Sunrise on another day, and the experience was very much the same.  I have now altered my opinion as to which quick-lunch spot is best.  We did note that just down the street, the landmark Taylor’s Refresher had changed its name.  The new name is Gotts Roadside Tray Gourmet, a bit unsettling I must say.  However, several of the residents we encountered indicate that it is essentially the same.  We did hear that the Taylor family was understandably upset with the re-naming. 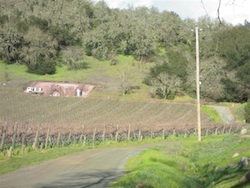 Our next stop was back up the same trail we had just departed, Anderson’s Conn Valley Winery.   We had been to Anderson’s place on our last visit, but this time we were honored to have owner Todd Anderson as our host.  Todd is quite an outspoken individual, a quality that makes him the entrepreneur he has become as well as an extremely interesting person with whom to converse.   We discussed worldly topics as well as his upcoming divorce.   Then it was onto wine.  We sampled their new issue of Sauvignon Blanc (Calvin’s favorite) and the 2007 reds (Eloge, Right Bank and Estate Cabernet).  All of these are deserving of the high rankings they have received from Parker.   Winemaker Mac Sawyer, trained in France and previously assisting in the winemaking at Cheval Blanc, is definitely on his game.   The 2007 intensly concentrated fruit harvested from their estate had something to do with it as well, I feel certain.  Anderson’s will remain a staple in our collections as the years progress. 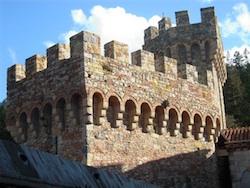 Dave had not taken the tour at Castello di Amorosa, so we scheduled it for the last visit of the day.   Marketing Manager Jim Sullivan had read some of my reviews of the winery’s premium Cabernet called Il Barone, so he greeted us at the entrance and authorized our visit, as a courtesy.  That was unexpected, but of course, welcomed.  Dave was amazed as we proceeded down the ramps into the various levels of the caves.  Those arched brick structures are thrilling to behold, even to me on this my fourth visit.

The 2007 Il Barone had been Parker rated at 94, and I was anxious to have a taste.   Their 2003 and 2004 had been the bold, chewy Cabs that originally captured my attention.  The 2005 and 2006, not so much.  I skipped almost every other wine offered in our premium tasting, awaiting Il Barone.  Yet, the tour’s host indicated she was only authorized to pour the 2006.   I requested that she ask Mr. Sullivan for permission to open a bottle of the 2007 for us.  This was permitted, to my delight.   The wine is not a pure Cabernet, introducing touches of Merlot and Petit Verdot into the vintage.  I can agree with Parker about the wine’s rating, yet I was disappointed at the near $20 escalation in the price per bottle ($78 to $98), just since last year.

We drove back to our Calistoga house and prepared for one of the highlights of our trip (at least to me).  Mustard’s Grill was the evening’s destination, and Cindy Pawlcyn’s Mongolian Pork Chops the fare.  None of us considered a different selection, for even a second.  Cindy was present that evening, so we decided to purchase the Mustard’s Cookbook for our wives, personally autographed.   She did not come over to the table, so I decided to get up and go give her a hug, along with bowing praise for her blissful creation.   What a great girl!!  We ended up eating at all three of her Napa eateries, by trip’s end.

Day two of our Napa adventure proved as interesting as the first.  Stay tuned for the next chapter…