The clouds which subdued the vistas of the Valley on Thursday were whisked away by Friday morning, allowing the heavenly artist’s palette of brilliant colors to return.  Breakfast was another extraordinary event, and after Dave’s financial market challenges were handled, we were off for more vineyard explorations. 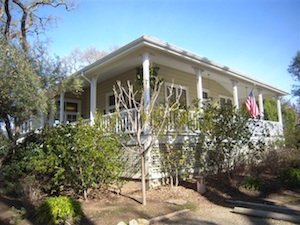 Our first stop was Spottswoode Estate Vineyard & Winery, on the northwest edge of St. Helena.  I had driven by the Spottswoode complex on Madrona Ave. before, believing that the vineyards directly behind the offices and winery belonged to this estate.  Our tour guide, Sue Cross, enlightened me to the fact that the Spottswoode vineyards were located directly behind the residence of owner Mary Novak across the street and along Hudson Ave.  We were given the opportunity to explore the grounds of Ms. Novak’s lovely residence.  The view of the vineyards directly behind her house was breathtaking.  Cabernet Sauvignon was the staple, with Sauvignon Blanc and two other blending varietals along the perimeter of the property.

The framed wooden farm house and barn-like yellow structures were all very well maintained, housing their equipment and aging barrels.  This woman-owned business looked to be as well-run an operation as any I have encountered in the Valley.  We were ushered into the business office, where a tasting room had been fashioned out of what had probably once been a bedroom in this dwelling.   The antique features and furnishings of the place yielded feelings of one’s grandmother’s house (a grandmother for someone currently approaching the age of 60).

We were allowed to taste the 2008 Estate Cabernet and the 2010 Sauvignon Blanc.   Both were excellent wines, although I had hoped to sample the Robert Parker (RP) 99 rated 2007 Cab.  As I should have expected, it had been whisked away by the demand that its high rating created.   The 2008 was fragrant with notes of blueberry and black currants, but not as fruit forward as what would have really captured my interest, especially at a price north of $100 per bottle. 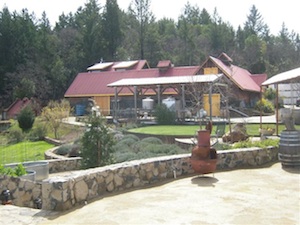 Next, we proceeded up Spring Mountain to the winery known as Behrens & Hitchcock.  I had noted some high ratings of this winery on the eRobertParker website, so I judged that it would be worthy of a visit.  Arriving at this mountain-top location, there were not many buildings and few visible estate vineyards to behold.  There were various structures created for sheltering an old model Airstream mobile trailer (serving as the tasting room) and other equipment items, including a “humongous” boat. (I marveled that it had been successfully pulled up the winding mountain road to this mountain-top location). 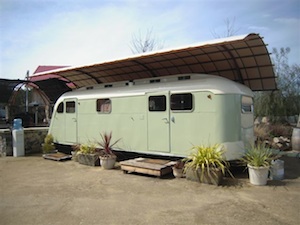 Robin, a lovely New York transplant, was our host.   She requested that we sit down in the dining room nook of the renovated unit for tasting their wines.  Most of what she offered were peculiar red blends, the likes of which I had never experienced before.  Less than surprised, I understood her to say that most of the fruit for these wines were not estate grown, blended by their winemaker and the resulting wines sparsely marketed.   I can say that none of these “captured my fancy,” so I was ready to proceed onward as soon as Dave and Calvin had finished conversing with her.  She was quite the talker, and my companions enjoyed her stories. 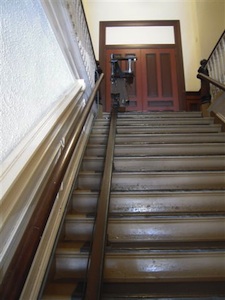 Down the hillside we cruised, until we approached downtown St. Helena.  We were a little early for our next appointment, so we stopped in again at the Sunshine Foods Market for a deli creation.  We did not have enough time to eat it there, so we drove into the downtown shopping-section of St. Helena, where the offices of Orin Swift Cellars are located.   As good fortune would have it, there was an available parking spot very near its entrance.   So, we parked, rolled down the windows and “scarffed down” our lunch, with only minutes to spare before our appointment.   At the top of the stairway, their door was open with two other visitors awaiting our arrival for commencement of the pouring.

Offered were the regulars (Saldo, Papillon and Mercury Head).  In my book, the 08 Mercury Head Cabernet was the best of these.  It had just been released, and I wager it will not be available for very long… consistently great.  New in the line-up were Machete, a Petite Sirah based Rhone blend, Abstract, a Grenache/Syrah blend styled after wines in France’s Roussillon region (near the Pyrenees Mountains) and Palermo, a young (2009) Napa Cabernet made from excesses, purchased by owner Dave Phinney for his other Cabernet based wines.  Abstract was unavailable for tasting, since it had recently sold out.   I am a fan of Rhone blends, but Machete was too heavy on the Petite Sirah for my taste.

The pleasant surprise of this tasting was Palermo.  You might think that such a youngster, created with “excess baggage” would be unimpressive.   However, Phinney has taken these overages and whipped-up a big fruit tasting Cab, worthy of a price point above its “south of thirty” release.   If left-overs always tasted this good, I would not have been as hesitant to come home for dinner as a child on Monday evenings.  And, you must see the label for this puppy.  It is the coolest I have ever encountered.   It features a “Cardinalesque” dressed-up skeleton, not a sight for the easily haunted.

We also learned that Phinney had recently sold his most popular label of The Prisoner to a South Korean buyer.   As a mid-thirties “boot-straps” winemaker, without owning his own vineyards or winemaking equipment, the boy’s done well.  The unfortunate thing about this sale is the fact that the new owner is not purchasing his fruit from the same producers which had helped make that vintage popular.  We gathered this from our conversation (later that evening) with Howell Mountain Zinfandel grape grower Mike Beatty, who immediately lost his source for selling each year’s “yields from the fields” after the transaction was finalized. 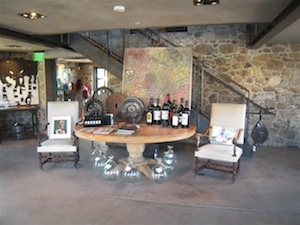 One of the stops I had been anticipating was our scheduled visit to Juslyn Vineyards, a short climb back up Spring Mountain.  However, owner Stephanie De Masi called me a week before our trip, apologizing for the fact that she had to fly to Arkansas on family business and could not host our visit to the vineyards and her home.  Disappointed, we understood.   She was kind enough to arrange for a free tasting of her wines at Ma(i)sonry, a tasting room/art gallery in Yountville.  So we drove there and sampled two of Juslyn’s Cabernets.  They were very good wines (especially the 2007), offering a very smooth tannin structure and complex flavor, making it ready for consumption.  Again however, I do not feel that the beauty of this offering is worthy of the $100+ price tag placed on it.  I have not discovered a Spring Mountain wine yet that has achieved that level of greatness.

We had a dinner reservation at a local Yountville restaurant named Hurley’s, but sadly dinnertime was too distant, and it was farther than we were all willing to drive, to Calistoga and then back again.  So, we called and cancelled.  Then Dave successfully reached his Howell Mountain winegrower buddy, Mike Beatty, and we arranged a dinner together at Cindy’s Backstreet Kitchen in St. Helena.  Nobody complained, because all of Cindy’s restaurants are gems.  The evening’s stories included a detailed account of Dave Phinney’s sale of his The Prisoner label, its ramifications to the growers, the upcoming sale of Mike’s residence as well as our usual sarcastic touting about the “intense variatal character” of each wine we tasted that evening.  We also teased Mike about Sue Cross’ (our Spottswoode host) referring to him as “arm candy.”  He’s a well known heart-throb among the “silver-haired” widows in the Valley.  It was a great evening.

There was another full day of Napa wine exploration ahead.  Our final day was directed toward Howell Mountain.  Keep tuned for the full account.