Saturday was a beauty, much like the day before.  Dave had no financial obligations, so we all took the early morning at a leisurely pace.  Our initial  destination of the day was Howell Mountain.  In the infancy of our wine group’s  friendship, Dave touted Outpost Winery as producing one of the best Zinfandels in Napa.   My son and I visited their place, a few trips back, but Dave and Calvin had not had the pleasure.  Thus it became our first stop.  Outpost is located near the top of Howell Mountain, on a little farm road appropriately named Summit Lake Drive.  The property, once owned and farmed by the Lamborn family, was sold to members of a vocal group called The Pringles, who painfully discovered that owning a vineyard and winery was not as simple and glamorous as envisioned.  In 1998, Outpost’s new owners secured the property and established the current day operation. 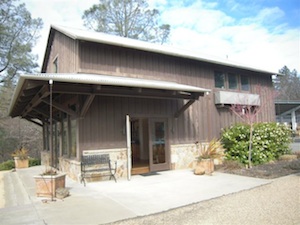 Our host, Erin, showed us around the facility and then led us into the scenic tasting room which overlooked Howell Mountain hillside and down to Napa Valley below.  We tasted the 2008 “True Vineyard” Cabernet, which was just a couple of points lower (a Robert Parker rated 96) than the previous year’s vintage, which quickly sold out within weeks of its offering.  The wine was still a beauty, well structured and offering a floral nose of dark fruits, but I remain upset with myself for not having pounced quickly enough when their 2007 offering letter arrived at my desk.  The 2008 Outpost Zinfandel, with its raspberry notes and long finish, was impressive as well. 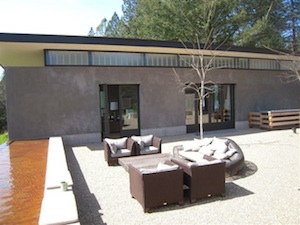 I had scheduled the morning tightly, so we could squeeze in at least three spots before driving down the mountain for lunch.  Goodness knows there is no place to stop for a bite in the small town of Angwin.  A gas station is about all you get.  On Howell Mountain Rd., a winery named Cade had previously eluded my search for quality vineyard locations.  Yet, combing through Parker’s website, I matched some great ratings with the listing of more wineries on this hill.  Cade was one of them, with a 98+ rating on its 2008 Howell Mountain Cabernet.  The facility was very modern and “green.”  They boasted a LEED Gold Certification for the structures’ energy and environmental design.   Living in the (now waning) commercial construction industry, I recognize the complexity, difficulty and expense in achieving such a rating.  It was indeed a beauty.

The wines were as impressive as the facility’s structures.  They offered a Rhone Blend styled wine which brought me back to recent remembrances of some of the finer offerings I recently sampled in Paso Robles.  The ultimate treat, however, was the 2008 Howell Mountain Cabernet.   Wowzer, what a giant of a wine!!  Do I enjoy paying more than $100 for any bottle of wine?  No.   Will I for this one?  Yes.  This offering, along with the 2007 Seavey Estate rated the most pleasant surprises of the entire trip.  Dave and Calvin agreed.  And, here is an interesting “twist” (so to speak).   For every bottle sold with traditional cork seals, they require the second purchase to be with the “new age” screw caps.  We learned that the screw caps they utilize (similar to numerous Austrailian wine bottles) offer a safer and longer lasting seal than corks can provide.  “Oh the times, they are a-changin’.” 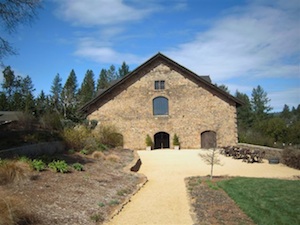 Not far away on White Cottage Rd. was Ladera Winery.  This place had an interesting old looking winery building, the internal structure of which had been gutted and replaced with space-aged components.  It gave me a James-Bond-movie kind of feeling as I walked into what initially appeared to be an old stone barn (surrounded by vineyards), yet inside was a labyrinth of modern winery equipment surrounded by poured-in-place concrete supported galvanized-steel grated stairways and walkways, extending a story above and below ground level.  My eyes scanned the place, wondering where the evil Dr. Vino was lurking, planning to unleash his sinister plot to dominate the world. 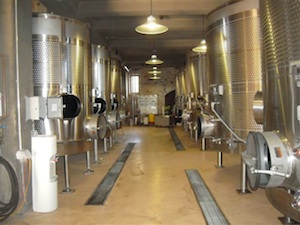 Instead there was a pleasant talkative fellow named Dan, who sat three glasses onto a counter between us and offered to pour samples of everything the winery produced.  And, he had a line-up of about 8 different wines.   My friends tried a few more than me, but my focus was their Howell Mountain Cabernet.  Only the 2006 was available, and Parker’s highest rating came for the 2007.   None of us had our “bells rung” from any of what we tasted.  And truthfully, Cade’s Cab was a hard act to follow.

Having a bit of time before our next tour, we traveled down to Silverado Trail and drove south to Soda Canyon Deli.  This was great, because we were able to compare the deli-sandwich creations of Soda Canyon and the two from Sunshine, the two previous days.  And the winner was…. Sunshine Foods Market.  Somehow my highly touted Soda Canyon store’s fare had lost a bit of its luster.  Yet, the picnic tables behind the place adjacent to a noisily flowing creek did help its rating a bit.  That is a relaxing spot to sit and enjoy a sandwich and chips. 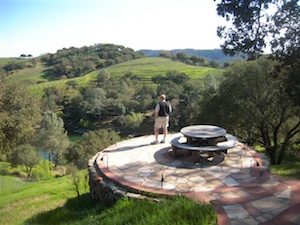 Since Bob had originally planned to come with us, before being forced to cancel, we wanted him to be exposed to the beauty of Kuleto Vineyards.  Thus the visit was booked.  Since it is such the wonderful spectacle that it is, we did not cancel, even though we had been there on our last Napa adventure.  The drive up the hill is always a challenge and a thrill.  Arrival at the top, a marvel.  Last trip we awaited a sorority reunion group’s arrival before the tour commenced.  This trip we awaited a group of tanked, expressively obnoxious guys, with similar nonchalance about their late arrival.  Fortunately our host Mike enlisted help from one of his “compadres” to handle the rowdies.   The tour of the grounds is never something to pass-up, but we let Mike know this was “not our first rodeo.”  Thus, we returned to the tasting room’s bar, as the “rowd-crowd” lagged behind, attempting meaningful communications with Pat Kuleto’s farm animals.

There were a number of new Cabernet labels to sample, most of which were (in our opinions) excessively priced.  Yet, our old faithful India Ink was in plentiful supply, and plentifully poured.  As we sipped, we were offered quite a deal on two-case purchases of the 2005 and 2006.  Calvin and Dave bought a pair each, shipping them back to Houston.  We all shared in the bottles and expense, after returning home.

I had planned to go to Steltzner Vineyards that evening for a sample of their 2007 Cabernet.  Yet, after I booked the visit and was promised a March tasting, some administrator decided to delay release, allowing more of the 2006 to sell.  We had already sampled their 2006 on our last trip, so I opted to skip the long drive south, and we headed back to Calistoga.   We had an early reservation at Go Fish Restaurant in St. Helena, so everyone gained a little resting time before dinner.   The meal and the great time we had together that evening were priceless.   Sadly, our trip had come to its conclusion.  We vowed that it would not be long before we set another date for returning to Napa or Paso Robles, hopefully with Bob joining us this time.

Recently my son decided to take a vacation trip to Spain, and I found a way to maneuver myself into his travel plans.  Yet, something happened that gave me the opportunity to divert to Bordeaux, by myself.  Thus my next recollections will be multiple chapters chronicling this upcoming adventure.  I am braving new territory, with great excitement and anticipation.  After months of careful preparation, numerous first and second growth wineries await my spring arrival.  “Send the word, send the word, over there…”   Cheers!!