There was a bit of disappointment in the air for the third day’s excursion.  Clouds were rolling in and the forecast was for light rain.   And, even though wine tasting typically takes place in covered areas, there is a greater feeling of excitement when a full measure of sunshine is embellishing the colorful surroundings.   Fortunately, the rain was slight and not too interruptive.   Following our typical morning ritual, we set out for the winery that I could not have Calvin miss, even though I had experienced the complete tour on my second trip.  It was Castello di Amorosa, just north of St. Helena.   Taking the tour of this place for the second time was as exciting as the first, not because I was able to experience anything new.  No, the great feeling came from watching the amazed eyes of a good friend as the tour unfolded.   The same awesome hand placed stone walls, drawbridge, Great Dining Hall, Chapel, Dungeon, Torture Chambers and brick lined wine caves were there, just as before.   Yet experiencing these features again with my friend, yielded a similar fulfillment as occurs on Christmas morning around the tree, when “true believers” in Santa are present.

We upgraded to the premium wine tasting package, so that I could expose him to Il Barone, their best Cabernet.   I was favorably impressed with the flavors of their Sangiovese selections, this go-around.   However, I did find that the ‘04 issue of their Il Barone was (although still great) not as “chewy” (great Preisers description) as the ‘03 bottles I had purchased and enjoyed.  I look forward to the ’05 issue with great anticipation, given the boost that this noteworthy Napa year has offered most of the Valley’s premium Cabernets. 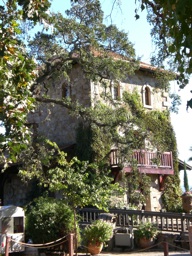 There were two brief wine tasting stops on our journey south.   One was Daryl (sorry, I refuse to acknowledge his preferred new Italian “Dario”) Sattui’s other winery, V. Sattui Winery.   My last trip, I had tasted the two offerings named Preston Vineyards Cabernet and Marisoli Vineyards Cabernet.   I wanted to acquire some additional bottles of these two “price worthy” offerings, in the ’05 vintage.   As I walked into the sales/tasting facility, I was amazed that in the few short months since my last visit, the complete store lay-out had been rearranged.  This new set-up seemed to better expose tasting customers to the beautifully illuminated displays.  Marketing, marketing, marketing. 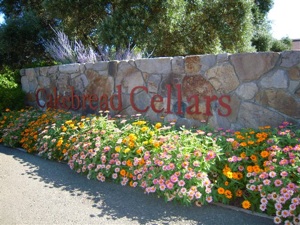 The other brief stop was at Cakebread Cellars, a short clip down the highway.  I had been introduced to Cakebread’s Cabernet by my company’s attorney (David Peden), when we and our wives got together for dinner about a year ago before an Astros baseball game.   He found this selection in the wine list, and was pleased to order and share it, with an interesting story of his own visit to this establishment, on a past Napa tour.  The wine (as he described) was very “smooth and flavorful,” yet in my opinion, lacking a memorable, lasting finish.  In reading about the winery, I noticed some premium offerings which I confirmed Magid had not tasted.  I was hopeful that they embodied some of the nice qualities of their standard issue, yet with a dose of “Va-Vah-Voom” in the finish, to make them more special.   We opted for the premium tasting, sampling two Cabernets called Vine Hill Ranch and Dancing Bear Ranch.  Neither got my engine “revved.”  Top of the line was Benchland Select, but it was not offered in the tasting line-up.  So, with fingers crossed, I purchased a bottle of it, for later consumption. 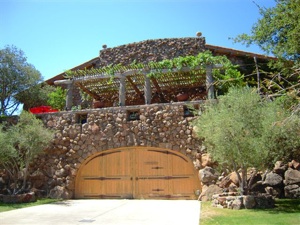 Our late afternoon appointment was at Kuleto Estate Winery, located in the Hennessey Basin of Eastern Napa Valley.  Magid had previously visited this establishment and the surrounding vineyards, informing me that their wines were good, but the views and facilities were tremendous.  When I follow his advice, it typically yields pleasing results.  This was not to be an exception.   Little Ms. Garmin headed us in the right direction along Sage Canyon Rd., but she did not instruct a turn when we noticed a Kuleto entrance sign.   With no other entrances appearing, we returned to the gate.  I forgave her. There was a button to push at an intercom station.  After announcing our arrival and the appointment confirmation, the gate opened.  Around every steeply graded mountain pass turn (with those cliff-side mounted round mirrors to safely warn of on-coming traffic on narrow turns) I felt like the parking lot would be just ahead.   Those anticipations lasted for about ten minutes of driving, and I finally lost my expectation that we would ever arrive.  A few more minutes and it did occur, although immediately thereafter it started to rain.  Being a construction guy, I naturally wondered about how the concrete trucks ever made it up to the top for deliveries. 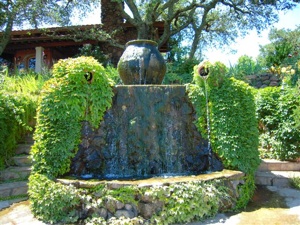 The rain soon stopped, and we proceeded into the rustic stone and rough timber facade tasting room.  Every feature of the place was beautifully crafted, without excessive manufactured refinement.  Entering, we were greeted by a red-headed young fellow (forgive me, I have forgotten his name), and were asked to join him in a comfortable corner of the room, following a brief tour of the facility.   As he brought out the wines for our tasting, anticipation was not very high, because I received no special accolades from Magid.  During our conversations, I discovered that Pat Kuleto (the Owner) was the same Kuleto who partnered in ownership of Martini House Restaurant in St. Helena.   I awaited the Cabernet, without trying anything else.  Our host asked me what I thought of my taste of the Cab.   I asked him, “Honestly?”   He said, “Definitely.”  So, I responded that I thought it was “OK” but not a thriller.   He smiled, took my glass and went over to the bar for a pour of something else.  Then he handed it to me and asked, “Then what do you think about this?”

Not wanting to confuse tastes on my palate, I crunched down a handful of Marcona Almonds (one of the best taste bud neutralizers I have found).   Then came the swirls, the long breathing sniff and the sip.   Eureka!  In the mountains of California, I had “struck gold.”   “What is this,” I asked him quickly.   He responded that it was their newly introduced premium Cabernet called India Ink.  Contrary to the words of the song, this waaaay did not warrant “holding my nose and closing my eyes.”  (Never heard it? OK, I lived with dinosaurs.)   Magid had definitely not been exposed to this wonderful wine on his visit.  I tried to call him on my cell phone, but we were out of range (mine’s not the service with “more bars in more places”).   Our host was pleased to have brought a smile to my face.  He sat the bottle down in front of me.  I restored my taste of the wine (and then some). Then we proceeded outside to “sip splendor,” and walk the grounds.

We hiked up to Pat Kuleto’s private residence, and felt a strong cool breeze lifting up off of the steep side of the mountainous cliff that it bordered, offering its occupants an amazing view of mountain meadow vineyards, Lake Hennessey and a monstrous mansion, atop a neighboring peak.  The colossal residence belonged to someone named Oprah.   I did not catch the last name.   We returned, and I purchased some Ink to-go, not knowing how I would get it packed with all the other bottles I had accumulated over the three days worth of the visit. 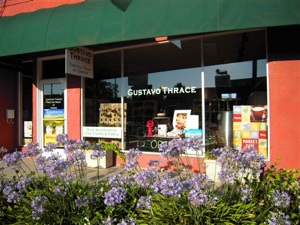 Returning “home” we did find a UPS shipping store, which was happy to package our burdensome bottle collection, at a price per case three times what Magid charges me.  It was the only way.  Just across the river in Downtown Napa, we made our final stop at the retail outlet for Gustavo Thrace (made famous in the movie Bottle Shock).   It could have been my “shocked” taste buds by this time of the day, but their Cabernet paled in comparison to the wine I had enjoyed just an hour before.   The Priesers recently had some nice words about their newly released Petite Sirah, so I will give it another chance on a future trip.

Did we enjoy a fabulous dinner that evening?   We had planned to, but the experience was so upsetting that I think it best to skip the account.   This day, and the others of this adventure were otherwise so very enjoyable, that one miscue could not tarnish the memory.   Obviously from these three chapters, there was “much too much” for a single story.   I know Calvin had a great time.   On one occasion, I overheard his cell phoned recap of the day’s events to his wife.  There was similar excitement in every tale he relayed.   So, what’s next?   At present, I plan to return with my son again in July.  He has the month off from his hectic Medical School schedule.   Afterward, all three of you guys can read about it.