A number of you have written or called to ask whether we are still writing our column. Well, we are, though we took a bit of a break to complete some other projects. But we are back, and to those who missed us enough to comment, we thank you.

Since there will be no “State of the Union Address” in 2009 (that particular speech being mandated by the Constitution to be given by the President for the preceding year), we thought it might be fun to write about the “State of the Napa Dining Experience,” as the past year has brought a number of significant changes to that valley. As is always the case, no matter what time of year one visits wine country, excellent food and wine abound, but our opportunity in the last few weeks to enjoy these luxuries in front of a fireplace made the experiences even more romantic and memorable.

Most Significant Change of Location: 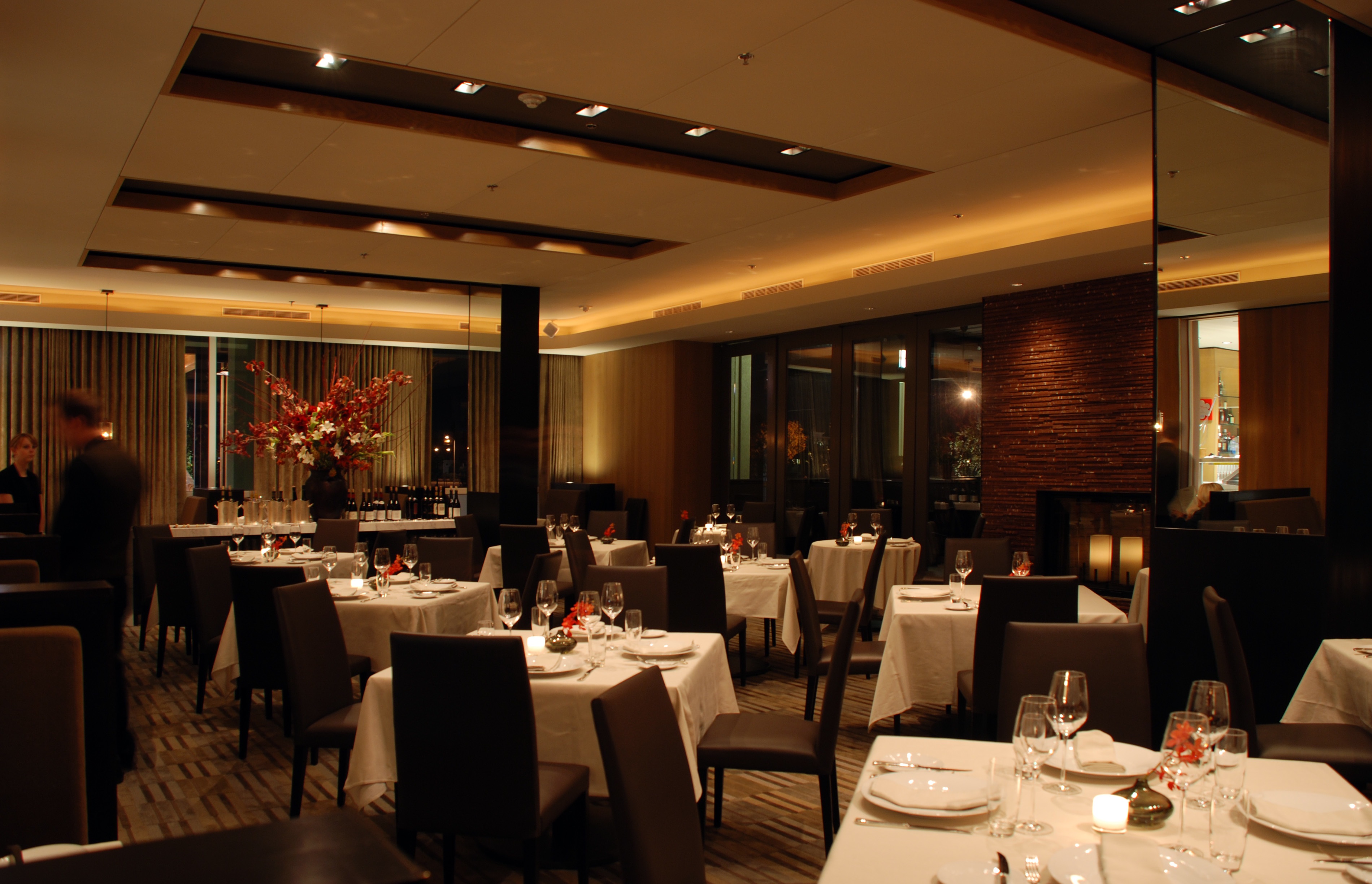 La Toque (257-5157), long one of our favorite places in the world, has left its home of ten years in bucolic up valley Rutherford, and moved to a gorgeous and inviting room at the new Westin in expanding downtown Napa. What has not changed is the superbly creative fine contemporary cuisine offered by Chef Ken Frank, or perhaps the world’s best wine program, overseen by legendary Scott Tracy and ably administered by one of the Valley’s sterling up and coming sommeliers, Yoon Ha. La Toque now offers the option to limit or expand the number of courses desired, rather than require a five or six course experience as it did in Rutherford. A full bar to accompany the unparalleled wine list is also available.
Few restaurants can match La Toque in terms of classical elegance, service, ambiance, or its ability to deliver dishes that seem to offer layer after layer of compatible flavors and textures. The lamb loin with cumin scented carrot puree was just named one of the country’s best ten dishes by USA Today. Finally, it is rare to find a room of this caliber with staff so professional AND so welcoming.
[BIG HINT: Call far enough in advance to reserve either the Chef’s table or one of the booths with a view of the kitchen].

Most Fabulous New Opening:
Napa has long waited for world class Italian cuisine (sorry Don Giovanni and Tra Vigne), and it has arrived with all the ruffles and flourishes of a new President. 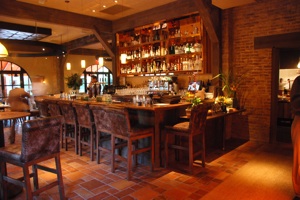 Bottega Napa Valley (945-1050) is, to put it simply, the first truly great all around dining experience to open in Napa Valley in many a year – probably, as a matter of fact, since La Toque opened in 1998. Owned by Chef Michael Chiarello, who ironically put Tra Vigne on the map for many seasons before he left and that establishment slipped, here is a place where everything has come together beautifully. And the crowds right now prove the point. It is unquestionably the hottest restaurant, with one of the best bar scenes, in wine country.
No mere Trattoria or common Ristorante, Bottega’s menu is a combination of the world’s cuisine influenced by the best of Tuscany. Dishes such as pasta with rabbit ragout or char-grilled octopus are rarely seen in the Valley, and never prepared better.
[BIG HINT: As you might guess, reservations are a must. But they are so swamped that it is sometimes hard to get a reservationist. We suggest you go to opentable.com]

Best Unknown (but not for long):
On a side street in downtown Napa (don’t all towns have a gem on a “side street?”), sits Bleaux Magnolia 252-2230), voted by locals as the best new restaurant in the Valley for 2007, and just named by Food and Wine as one of the nation’s top five “BYOB” dining establishments. Yes, Virginia, that’s correct - “no corkage charge.” While in most places that is certainly good news, in Napa, capital of the Cabernet Sauvignon world, it is huge.
But there are more surprises. The cuisine here is Creole influenced, something you are not likely to find anywhere else in northern California. And, as they say in New Orleans, “Let the good times roll.”
Monty went to school at Tulane University in New Orleans and we have visited at least once a year for twenty five years. So we hope we know the food. With that background (or even without), we tell you that the seafood gumbo is the best we have tasted outside the Crescent City itself, and the jambalaya will make you think you are back in the southern heat. Listen for the oyster specials, and don’t miss trying the meat loaf sandwich with pickles, homemade spicy ketchup, and fried pickles.
[BIG HINT: Sunday jazz brunches are a hit, and sometime soon the restaurant will open a beer garden in the back].

Most Appreciated Opening:
Though a bit over a year old now, Go Fish (963-0700) has melded into upper Valley life like an old standard. Eagerly awaited by an area lacking in fine fish and seafood dishes, famed Cindy Pawlcyn and her partners have created a model for the genre. Each day features different delights of the sea prepared traditionally, with more modern creativity, or even in unique sushi concoctions. In that Fish is so popular, it is not surprising that many vintners clamor to have their wines on the list. And because Fish so often lends itself to lighter bodied varietals, here is a place to experiment with wines you might not know.
For our money, the cod in Miso broth and the Ken’s Roll, named after partner Ken Tominaga, are not to be missed, But be creative yourself, and share a varied menu with a group.
[BIG HINT: If you want to see vintners, winemakers, and players, this is one of the places to do it. You can usually get in without a reservation if you show up at 11:30 for lunch, but, otherwise, call ahead].

Best Comeback:
One of our favorite places used to be the venerable Brix (944-2749), just outside of Yountville on Highway 29. But what proved to be an unfortunate managerial hiring and its aftermath (including a change of name) confused the public and led to a downturn in customers in 2008. We are more than happy to tell you that the Kelleher family has taken over the establishment once again, changed the name back to Brix, engaged an excellent chef, and, in a word, made it one of the “places to be” again. Last week we walked in thinking the public did not yet know about the changes, and we were shocked to find a two hour wait. Next time –reservations. The ex manager did do one thing right – he oversaw a change in décor from old wine country to contemporary romance. Dark woods, more private tables, and a gorgeous wine room available for dining under the right circumstances make an experience at Brix a delight once more.
[BIG HINT: The wine room is available for lunch and dinner, so you if you have 6 or more we suggest you call to check into using it. You will impress your friends].

Best Napa Apres Ski
Martini House (963-2233) is no longer a new fixture in the Valley, but if you would like to go where many of the locals show up on a late winter afternoon or an early summer’s eve, try the cozy bar downstairs. Small enough to feel as if you should know everyone, yet large enough for good diversity, you can lean back, order from a superb wine and cocktail list, and watch the fire (weather cooperating), all the while engaging in some good old fashioned mingling and wine tasting. The bar menu may not be long on quantity, but the spring rolls and pot stickers are good enough to serve as a light meal if you like. Good energy all around here.


Appreciated Continuity:
Some chefs and owners have the talent and energy for the long haul. To them, we say “Hail,” as being able to return again and again to one’s favorite place to eat is an enjoyment of life.
Congratulations Greg Cole, on keeping Celadon (254-9690) at such a high level. As most if us concede, the world’s finest calamari is served here.
Way to go Ron Goldin and Mark Young, for maintaining the allure of Brannan’s (942-2233) in the wake of a chef change. Fortunately, the change is obviously a lateral one as the food has not suffered even a little bit.
No place is better for a late night experience reminiscent of Paris’ left bank than Bouchon (944-8037). It serves late, there are always lots of people, and the raw bar offers the freshest of seafood.
Farm (299-4880), under the watchful eyes of Chefs Jeff Jake and Christophe Gerard, always seems to offer something special, and the patio with its long illusional fireplace is one of the most romantic around.
Ask any food professional and they will tell you running more than one restaurant and maintaining top quality in each is truly a slippery slope. Cindy Pawlcyn succeeds with not only Go Fish (mentioned above), but with the famed Mustard’s (944-2424) and eclectic Backstreet Kitchen (963-1200), the latter two important staples in the Valley.
And while only one of us really cares for vegetarian houses, Ubuntu (251-5656) continues to please the many who frequent its dining room.

For the Locals (and Savvy Visitors):
Thai Kitchen (254-9271) on Trancas has better than reliable food for some of the lowest prices around. No ambiance, and they don’t take credit cards, but we manage to get there twice a week when in town.
UVA (255-6646), downtown on Clinton, serves up New York style southern Italian fare (with some northern provincial preparations thrown in). Good music four or five days a week.

We Miss Them:
Pilar’s, the popular downtown fine dining room of Pilar Sanchez, has closed its doors. It was always one of our favorite places for fresh cuisine and nice people.
With the surprise bankruptcy and closing of COPIA went Julia’s Kitchen, always under-rated and unappreciated.

Hopeful for a Comeback:
Sadly, there are a few places undergoing some rough times, including some in which we ate not too long ago. These establishments have unfortunately lapsed into complacency to varying degrees. Bistro Jeanty seems to be mired in the past. Cuvee is without the best of direction. Angele needs a boost of some je ne sais quois. And we have been unable to find a rare piece of tri-tip at Buster’s for far too long. Here is our hope for comebacks in 2009 for all !!!!!!

A Last Word:
It will probably be apparent that there are many well known and well thought of places that we did not mention in this column (for example, Auberge du Soleil, Meadowood, and French Laundry). But this is not meant to be exhaustive. It is meant to update you on only some of the places where we have actually dined in the very recent past, and to give you what we view as the state of dining in Napa. And what is that state? Quite excellent, thank you.