Preisers’ Reserve: Well they have done it again. After a few years of not producing their delicious Petite Sirah, Gustavo Thrace winery owners Gustavo Brambilla (he the winemaker) and Thrace Bromberger (she the marketer and self styled “forklift queen”) have released their new 2006 Gustavo Thrace Petite Sirah ($35). As before, it is inky dark (evidencing desired concentration), and shows easily discernable flavors of chocolate, cloves, and dark fruit. Always a winner before – and still a winner now.  But hurry – only 160 cases were produced.
www.gustavothrace.com                            707-257-6796


Good News – Thanks Law Enforcement
Between 2007 and 2008 Napa statistics show that deaths and injuries from motor vehicle accidents decreased from 7 and 39, to ONE and 10 respectively. As the Napa Register commented, “[This] can only make every motorist, pedestrian, and bicyclist feel more secure on Napa roads.”  Amen.

Just Off Rt. 29
One of the pleasures of driving around wine country is that there is always the possibility of dropping in on a winery you don’t know, or where you haven’t tasted for a while, and then finding something well worth drinking. That happened to us most recently when we drove off Rt. 29 in St. Helena to taste at Salvestrin, and discovered two wines worthy of recommendation.
-2007 Sauvignon Blanc ($22). 100% Sauvignon Blanc, it is fermented in stainless steel, and sees some oak during fermentation. The introduction of the oak helps round out the pear and citrus flavors, especially on the finish, and makes for a wine that will accompany more than the usual shellfish.
-2006 Retaggio ($34). Italian for “Legacy,” the Retaggio is the family’s Super Tuscan style wine, made of Sangiovese, Merlot, and Cabernet Sauvignon. Blackberries and soft spices are wonderfully integrated with earth and pepper. Nice acidity and a slight touch of citrus remind one of Italy, while the boldness speaks of California.

We only tasted the two Rich Salvestrin wines above, but he makes what is reported by all to be a startling good Sangiovese that almost always sells out quickly. We have not tasted the stand alone Sangio (it was prominent in the Retaggio), but Shannon Salvestrin tells us that this year the winery has an extra 20 cases for sale. We think buying some is probably a good gamble.


JAQKs to Open
And speaking of gambling, it isn't often that a wine label inspires us toward play. In fact, after many years frequenting many a casino, we have almost stopped tossing for that eee-yo-leven or waiting for that ace in the hole. However, after only a few minutes spent examining the labels of the new Napa winery JAQK CELLARS, we were ready to invite a crowd over for some black jack or dice. But on second thought, since our corkscrew was already in hand we settled for a glass of the wine while watching reruns of the still brilliant Maverick on cable TV.

As for the wine bottles themselves, some are labeled in silkscreen and some employ antiqued paper labels, but all are at once graphically grabbing and whimsical - the packaging for this line of wine is almost irresistible. This was no longer a surprise once we learned that two of the founders of JAQK Cellars are graphic designers Katie Jain and Joel Templin, whose resume credits include Coke and Target. 'Nuff said.

But all the best marketing means nothing without the wine.  The third founder is winemaker Craig MacLean, whose pedigree includes Chappellet, Markham, Cain, Spring Mt., plus, of course, his own MacLean label.  Add on company president Bernard La Borie, whom we know from the days when he was instrumental in starting Darioush, and you have a team on which you can place your proverbial bet. We tasted the following reds:

-2006 JAQK Soldiers of Fortune Shiraz, Napa Valley ($50). This wine is bright and bold with juicy blueberry, spices, orange peel, and a hint of spearmint in the upper front palate. After aeration we found the finish to be long, silky, and mouth coating.

-2006 JAQK Bone Dance Merlot, California ($29). Of the three wines we cover here, this was the best bargain and our favorite - both label and wine. It shows lots of red cherries, black raspberry, vanilla, and pie spices.  It begs for grilled beef but went beautifully with our capellini and red pepper sauce. Soft tannins envelop the upper palate, while mouth watering acidity rounds out the mouth.


And the real winning combination....
So many times a young, often expensive wine opens with the fruit overpowered by tannin and alcohol – not necessarily pucker power tannins, but enough to lessen enjoyment on the palate.  You could open the wine hours earlier - if you plan that far ahead, or double decant. However, we were recently introduced to a new aerator from Italy. It looks like a cross between a science experiment and a bong, is quite portable, and an attention getter - don't use it in a restaurant unless you don’t mind stares from other diners.

The important thing is that unlike the many “gadgets” that come across our desk, we believe this one works!  We have tried it with a number of wines, including the ones from JAQK Cellars above, and the flavor profile and approachability were quickly and markedly improved, even in wines that were already good.  And you are only decanting one glass at a time.  No worries of the rest of the wine going dead an hour later since it is safe and oxygen protected in the bottle. 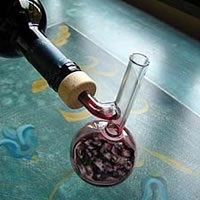 The product’s name is Versovino il Decanter piccolino, and it retails for under $45. Go to www.pouringwine.com for more information, and if you want to try it after you read about it there (and here, of course), it would be nice to order from our affable and knowledgeable friend, distributor Franceso Guerriero at pouringwine@bellsouth.net.