Nickel & Nickel (http://www.nickelandnickel.com) broke ground in June 2001 on the first phase of a winery building and historic restoration project. Located adjacent to Nickel & Nickel's Sullenger Vineyard, a 42-acre site directly north of Opus One, the winery's custom design will enable the hand-crafted production of Nickel & Nickel's small-lot, single vineyard wines. Plans call for completion of the barrel cellar and part of the winery's fermentation facility in time for the crush of 2002.

The unique demands of Nickel & Nickel, which will eventually produce up to twenty-five single vineyard wines from several varietals, require detailed production measures. The aim is to create a winery with enough flexibility to nurture each vineyard, rather than limit the natural winemaking process.

Four sizes of tanks will be installed to accommodate production needs. The tanks will be jacketed to allow for individual warming or cooling during fermentation. The use of both bladder and basket presses will allow for flexibility with crushing and pressing methods. The barrel room will encompass separate, temperature-controlled bays, allowing for supervision of the microclimate within each bay. Different coopers will be matched with the vineyards to allow for the best expression of the individual wines, and other plans are in development.

Excavation has begun on a 32,000 square-foot subterranean barrel cellar and press area. The cellar's 15-foot ceilings will be finished with groin-arch plaster detailing that will conceal the piping, electrical and other mechanical systems necessary for wine production. The arches will be connected and supported by a series of wide pillars symmetrically aligned throughout the cellar, between which the barrels will be stacked. 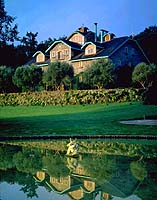 The centerpiece of the historic restoration is the 1880s-era Queen Anne-style Sullenger home, which will house the reception area and offices. A new basement will be excavated for the home which, when completed, will hold a private dining room and wine library. The main floor will contain the guest reception area, two separate tasting salons, a professional-grade kitchen and an open-air porch framing the rear of the home. The second floor will house administration offices. The Sullenger barn and a shed that was also part of the historic farmstead will be restored and used for case goods storage.

John C. Sullenger, a prospector who struck gold in the Sierra Nevada, acquired the Oakville parcel in 1865 from the Rancho Caymus grant and first developed the site. Nickel & Nickel purchased the remaining 42 acres in 1998. The aesthetic goal of the project is to restore the Sullenger farmstead and construct new winery buildings that are complimentary to the historic structures.

Two San Francisco architecture firms are involved in the project. Architectural Resources Group is responsible for the restoration of the Sullenger home and barns; Brandenberger, Taylor, Lombardo designed the production facilities. Upon completion, Nickel & Nickel will be open to the public, by appointment. In the meantime, construction progress can be monitored by contacting the "News" section of the winery's website, www.nickelandnickel.com.

Established in 1997 by the partners of Far Niente -- Gil Nickel, Dirk Hampson and Larry Maguire -- the Nickel & Nickel winery was founded upon a philosophy of exclusively producing small-lot, single vineyard wines that best express the distinctive personality of each vineyard. The Nickel & Nickel single vineyard, single-varietal wines currently include Chardonnay, Merlot, Zinfandel and four Cabernet Sauvignons, produced from vineyard sites throughout the Napa and Sonoma valleys.