How many people do you know that became enophiles after first tasting a red Zinfandel? And how often was the wine label named Ravenswood? Quite frequently, we are sure, given the fact that owner/winemaker Joel Peterson makes and distributes over 700,000 cases of his entry level wine, the Ravenswood Vintners Blend Zinfandel, each year.

But here is what you might not know:
Joel also makes numerous single vineyards Zinfandels, as well as a Bordeaux blend, that will knock your proverbial socks off.

We recently spent an enjoyable two hour lunch with Joel at El Dorado kitchen in the town of Sonoma, where we not only had the distinct pleasure of tasting ten of his high level vineyard designate wines, but also learning some chemistry and history from this erudite gentleman. Truth be told, no story about Ravenswood would be complete without highlighting this man who singlehandedly built the winery and helped shepherd Red Zinfandel into the mainstream of the wine drinking world.

Joel Peterson grew up east of San Francisco before California had acquired any sort of reputation for producing quality wines. His father, a chemist who had a lasting positive effect on Joel, started a tasting club where its members (and twice a week young Joel) had the opportunity to evaluate fine wines from all over the world. The story goes that Joel was allowed to taste, but had to spit, and that Father would often check the spittoon to be sure Son was “cooperating.”

Obtaining a chemistry degree at Oregon State University, Joel began his career in the lab. However, his love for, and knowledge of, wine had been well established during his many years at the tasting club, and at home by his wine appreciating Dad. So while Joel engaged in research, he earned extra money by writing and consulting about the grape. 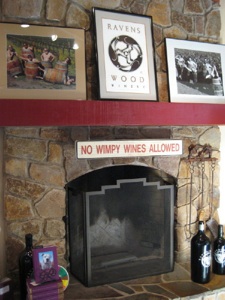 Ultimately, the winemaking field, as it has done to so many, drew Joel to its magic, and he wisely obtained an internship with classically trained Joseph Swan. Here, Joel was schooled on the finer techniques of French production. From there it was a short step to founding his own label in 1976 with fellow wine lover Reed Foster, and then a few longer strides to profitability and their own winery. As Joel said, “In the beginning, it was Zin or nothing for us.” When asked if he was prepared to produce a White Zinfandel, his response was unequivocal. “I don't make that wimpy crap!” Ever since, the motto at Ravenswood has been “No Wimpy Wines,” and Joel has risen to become an icon to fellow winemakers, enophiles, and critics around the world by producing new world wines by what he describes as old world techniques. He has further explained,

Every Ravenswood wine possesses a unique vintage and vineyard identity in addition to the intense, powerful character with which the winery has come to be associated.

As we suggested at the outset, most people are well aware of the widely distributed “Vintners Blend.” Ravenswood also releases a tier under the name “County Series.” The former (one Zin) is comprised of grapes from throughout California, and provides a less expensive, yet good value, Zinfandel. The latter (two wines – each from its own appellation) are made from distinctive vineyards in Sonoma and Napa, and allow the buyer to find a semi-premium wine at still reasonable prices.

And then there are the simply marvelous vineyard designates, which is what we are primarily covering (and giving raves to) today. These Zins are each made from a particular vineyard, and all in the same manner. Each is fermented in open top fermenters that allow the punching down process to be accomplished by hand. The wines are then aged in 35%-50% new French oak for about two years.

The markedly different taste profiles of these vineyard designates are the results of what each individual vineyard provides - from soil to climate to varietals grown. As you will see, for example, some bottles will be blended with other varietals grown in the same vineyard. Joel will even sometimes ferment a few varieties together and refer to the result as “mixed blacks” (usually a mix of Carignane, Petite Sirah, Alicante Bouchet, and an unknown or two), which are then again blended with the Zinfandel. Sometimes percentages are specified, and sometimes not. Unusual, but it works.

If you have never tasted these single designate wines, we highly recommend you choose a couple (or more) based on what you read here or on the Ravenswood website, and consider ordering them. You may well find that what you think you know about Zinfandel, you do not.

-2007 Big River Old Vines Zinfandel ($35): Another 100% Zin, this is from Alexander Valley and features a spicy nose followed by lots of dark plums and raspberries. Elegant.

-2007 Belloni Russian River Valley Zinfandel ($35): 78% Zin and a 22% mixture of “blacks” give this wine some fullness and hints of blackberries. Big on the mid palate, it’s a brilliant use of varietals one rarely sees in such a blend.

-2007 Barricia Sonoma Valley Zinfandel ($35): This was our least favorite of an excellent array of wines, with the highly scented blueberry being overcome by too much tannin for our palates.

-2007 Old Hill Sonoma Zinfandel ($60): Here is a complex wine that allows the identification of many of the mixed black grapes that comprise 24% of each bottle. You can also discover hints of pepper, smoke, and vanilla. The vines may be the oldest in Sonoma, and this may be our favorite.

-2007 Icon Mixed Blacks ($75): You’ll probably want to try this, just to say you have. With 36% Carignane, 27% Petite Sirah, 25% Zinfandel, and 12% “mixed blacks,” the Icon is intense and explodes with bright black cherries, licorice, and plums, among many other flavors and spices.

-2006 Pickberry ($50): Continuing to surprise, here we find Joel Peterson’s outstanding venture into the world of Bordeaux varietals. This blend of 74% Merlot and 26% Cabernet Sauvignon is smooth yet structured, offers up red fruit from nose to mid palate, and finishes with tobacco and underbrush. A wonderful wine at any price, but for $50 - Wow.

So that completes our journey through Ravenswood’s wines. It seems only fitting to quote Joel once more. “The three sins of Zins are too much oak, too much alcohol, and too much sugar.” For us, like Baby Bear, in Joel’s hands these things are just right.