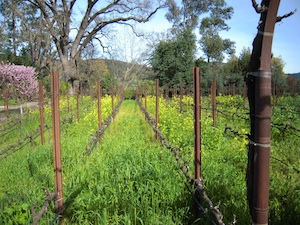 Back in February 2010, Sally offered me an opportunity to cover Camp Schramsberg, which took place in mid-March.  Since this coincided with the “spring release” of many of the 2007 Cabernets in Napa, I decided to stay for a longer period of time and immerse myself into many of the wines that I intended to purchase in this upcoming banner year for the valley.  Planning the trip, I had a choice of flying into San Francisco early Sunday morning or later in the day.   Both would allow me to make the evening commencement of the Camp’s reception and dinner.   Early was the choice, and I had two places in mind for afternoon stops in advance of my ultimate Calistoga destination.

Every time I had ever arrived in this airport and traveled by sky-tram over to the rental car location, the process had been smooth and easy.  On this day, when the tram door opened for me to exit, I could see the Budget Car Rental line wrapping around the turnstiles and out into the common area, like a Python snake.  With only three agents at the desk, I knew I had a problem.  I forgot that this was the week of Spring Break, and the hoards of kids and families were all awaiting their turn for “R & R” to begin.   The line crept, and I continued to look at my watch, fearing that my 3 pm. appointment at Martin Estate Winery would be jeopardized.  Then a nice lady magically appeared and announced that another spot where the “elite” checked-in, was available in this over-crowded situation.   I bolted and arrived second in the new line.  Once on the road with my GPS “girlfriend,” I thought there might be enough time after all.   Sunday afternoon, California freeways and not a patrolman in sight equated to a brisk, record-setting dash to Napa.   The day was cloudlessly perfect.

Needing something on my stomach before consuming fine wine, I made my approach via Silverado Trail.   That way I could stop into (my “fave”) Soda Canyon Store for one of their great deli sandwiches.   It was just after 2 pm. so I zipped in and out with a classic smoked turkey on rye balanced on my lap as I pressed northward.   On the “Trail,” you dare not speed.   California’s finest are almost always strategically parked around the next curve, waiting.   I had enough time to stop into Cliff Lede Vineyards to see if any of their premium, 2007 Cabernet was available.  They will not allow you to mail order for these beauties, unless you are a Club member (which I am not).   However, they will occasionally sell some off of the shelf, if you catch them at the right time.   Unfortunately, my timing was off.   Mark (the guy who had hosted my Poetry tasting, several visits back) recognized me, but frowned as if pouting, indicating that no such luck existed today.   The 2007 Songbook was a “gonner.”   Without a fee, he allowed me to taste the current release Napa Cabernet.  I was informed that the 2007 Poetry would be out in August.   This is a wine that Magid will be allocated, so I remain patiently waiting. 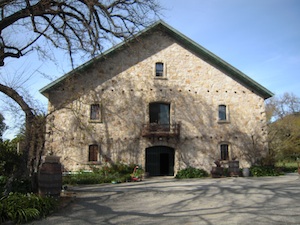 As quickly as I zipped in, I zipped out.  It was 10 minutes to my Martin Estate Winery appointment, and I did not wish to be late.   Martin’s location is discrete, by intent.   There are no signs, just the address number posted on an antique cast-iron arched gate.   I approached and pressed the button on the call station.  A female voice answered and I gave her my name.   The gate swung open and I crept along the quaint drive to the winery building (a two-plus story stone structure, constructed in 1887), which I would later discover was also the residence of the Martin family. 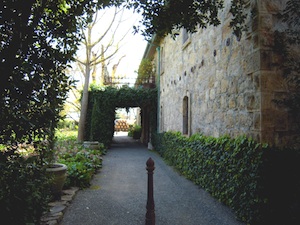 At the entrance, I heard barking from the official greeter, Baccha.  The black pooch (of undetermined lineage) was sizeable, so I just put out my hand in a friendly gesture.  I was briefly sniffed, and with a brisk tail-wag everything was cool.   I found my way to the tasting room where I met Petra Martin who was talking with another couple, scheduled for that same visit.   In just a few moments I noticed that Petra was fashioned after a rare bottle of Reserve Cabernet, a slender classic, gaining beauty with each passing year.   This gracious lady told us about the history of the facility, the wines, their awards from the American Fine Wine Competition and Martin’s full-timed winemaker Frederic Delivert, all while pouring ample tastes of the current issues of Bacchanal (the standard Napa issue Cabernet) and the premium Martin Estate Reserve (current 2005 release and the 2003 Estate Library Cabernet).  All were delightful, with upfront dark fruit, classic structure and memorable finish.  I was impressed when she acknowledged knowing about Sally’s Place and Monty and Sara Preiser who also write for the publication.  She told me Monty had commented that her wines were some of the best that Rutherford had to offer (and after this experience, I would agree).  She later allowed me to purchase bottles of her Library 2003 Estate Cabernet to enjoy with my friends who would be joining me following my Camp experience at Schramsberg.   My wine connection Magid (Ludwig’s Fine Wines) was able to secure more for me after my return home. 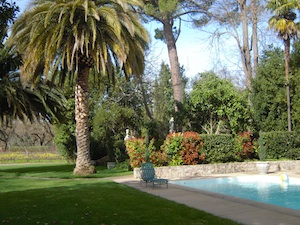 We toured the lovely grounds of the Estate, the semi-Olympic sized swimming pool, as well as portions of the Martin home, located on the second floor.  This stained and weathered timber-plank second floor area, enhanced by painted plaster-coated and natural exposed stone perimeter walls, once was the place where the grapes were hoisted in through loft-type openings (currently window enclosed) for crushing and the juice then channeled by gravity-flow into fermenting containers located below on the first floor.   Modern equipment now resides in the ground floor’s functional winery, and the second floor was remodeled into strikingly beautiful antique-laden living areas.  It was a breathtaking vision which deserved to be captured in one or more of the nation’s finest magazine publications which feature unique residential creations.   Petra was proud of her home, and justly so.

Unfortunately the time flew by and I had to cut-short this most interesting visit much sooner than I had wished.  Schedule dictated that I proceed onward to my Calistoga hotel room so that I could unpack and get changed into clothes suitable for the upcoming Schramsberg reception.  As my vehicle rolled slowly outward, I knew this would not be the last time I visited the Martins and their wonderful winery.   Much like the visual treasures of the Kuleto Estate, it would become a spot I hope to bring back friends and family to share the experience.   Petra, her wines and her wonderful abode were so pleasantly unlike I had imagined, they all made this already picturesque afternoon’s visit, day-dreamingly memorable.

I recently wrote about the Schramsberg adventure in my Sally’s Place article “Schramsberg Sparkling Enlightenment.”  Following Camp, two of my good (wine enthusiast) friends would join me for the balance of the week.  Three more days of wine adventures thus awaited us at its conclusion.   The entire trip was a hoot, and hopefully my upcoming accounts will bring a little more informative enjoyment to those who read my column.