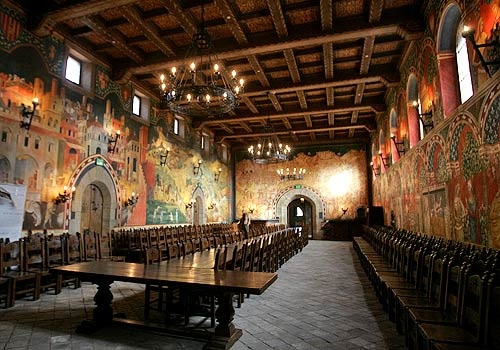 Recently the planets and stars came into alignment, allowing my wife Cathy's and my schedules a mutual opening for us to fly to San Francisco and squeeze in a brief visit to Napa Valley. I was pumped. Since the last adventure, I had studied all my internet options for the best buy on a Garmin GPS system, to deliver us safely to the “Promised Land.” Unlike my son who would have opened the box, turned on the unit and started its successful utilization by means of the God-given computer instinct (bestowed upon today’s youth), I read the directions cover to cover. Armed with this single intense study session, I installed the unit in my car and programmed in my address for its guidance in the 7 minute drive home from the office. I was a bit disappointed that it did not realize all the shortcuts that I normally take to avoid all the “traffic” (please indulge the fact that I am indeed spoiled from my relatively short commute). Yet, with relative accuracy I managed to stop the car directly in front of my residence, having followed all the instructions given by the cute female British-accented voice, trapped inside. No more expensive guides for me! I was empowered.

Since portions of the allure I “sold” to my wife were some of the attractions of the big City, we nestled into a comfortable hotel Downtown and took in several nice restaurants, the new baseball home of the Giants (we are both big fans of the game), the Ferry Building Marketplace, Fisherman’s Warf and of course its monster sea lion inhabitants. The sun beamed brightly, but the wind was typically cold and biting. My wife’s teeth start to chatter at 65 degrees, so I thought this chill was a perfect precursor to the next day’s (beautifully forecasted warm) adventure in the Valley. I was right.

We rose early the next morning, acquired a rent car and programmed my British beauty to take us to sacred soil. I wanted to go by means of the Golden Gate Bridge, but “Ms. Garmin” was bound and determined to lead me across the Bay Bridge into Oakland. Being generally conversant of the Downtown streets, I headed toward my selected bridge amidst her little GPS voice asking me to turn back, followed by her annoying “Recalculating” each time I disobeyed. She continued with that banter until we had crossed over into the Sausalito area, at which point turning back became a more lengthy option. We soon became friends again.

Napa Valley was as beautiful as I had remembered, only with new growth on the vines, offering lively shades of green where the mustard yellows had dominated months before. I drove my wife to several of the noted old-name winery structures along Highway 29, sensing that she might be impressed by their beauty. However, her eyes did not seem to brighten until we encountered the shop lined main-street of St. Helena. The stores had just started opening for business, and as I expected, we were destined to explore. I parked the car on Spring Street (crossing the thoroughfare), expecting that this adventure would last to the time of my reservation at Martini House (located nearby) for lunch…. and it did. We hit every store on both sides of the street over the several blocks of their side-by-side concentration. There were toys, chocolates, antiques, “knick-knacks,” furniture, clothing and (did I mention?) antiques… all the things that make women (the ones I know) glow, and men (again, the ones I know) tap their feet and search for a place to sit down. But in essence it was not a huge price to pay for the portion of the visit that I would start to enjoy, come 11:30 am. (our reservation for lunch).

That time came and we entered the yard of the beautiful old white house which was transformed into Martini House. The day was a delight, with only a slight breeze, so we opted to dine in the outside seating area. Unlike our wonderful and talented Sally, I cannot remember every intimate detail about the fare. I know that it was their Halibut Special, and other than the fact that it was a delight, I can relay none of the specifics. They did suggest a wine (as a coupling to the dish) that I did partake, and remember. It was an ‘05 Sauvignon Blanc from the Carrefour Vineyards. Not yet being educated in the jargon of wine descriptions (help me Preisers !!), it had a fragrance of soft roses and to the taste it was a sensual manifestation of the same. This was a real delight, so much so that I called Marilyn Nitz (co-owner) upon my return and ordered a case. Being the Cabernet person that I am, I do not consume white wines very often. But, I now am prepared to impress when the occasion warrants. 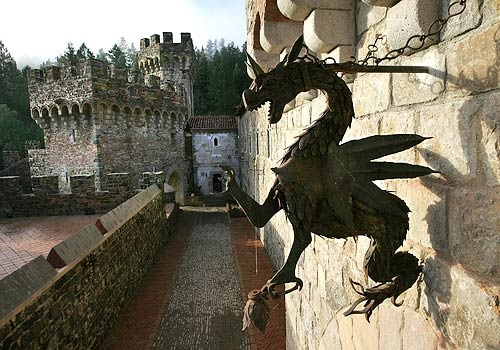 After lunch, it was my turn. Only weeks before, I had read an article (in the Travel Section of the Houston Chronicle) about a winery that had just opened to the public, which had been under construction over the past 12 years. Daryl Sattui, owner of the V. Sattui Winery on the southern side of St. Helena, had created a 121,000 square foot medieval-style castle made of stone and imported antique European components, called Castello di Amorosa. It is located off of Hwy 29, just south of Calistoga. I read that it cost him a mere $30 million to build. Without going into descriptions that are very intricately worded and available on-line, let me just say that it is a most-worthy visit. I had to book the tour in advance, and I know from my more recent returned trip (just for wine purchase), it is still requisite. The tour took up quite a bit of the afternoon, but was indeed amusing. When sampling their Cabernets, I suggest spending the money to upgrade to the premium tasting. In my humble opinion, their basic Cab is just OK, a bit peppery for my taste. But, the premium Cab called Il Barone, is “to die for.” And to my ultimate regret, like V. Sattui Winery, the only way to secure this product is an on-line purchase from the winery or a personal visit. They do not distribute any other way.

On our way south, Cathy was “compelled” to stop into St. Helena’s shops again to have a look at a couple of those items (or should I say “treasures?”) which were not good enough to buy on sight, but became more interesting (and thus desirable) as they rolled around in her mind during the Amorosa tour. I must admit, I became somewhat impatient. There are limits, you know, when so many wineries are yet to be explored. Yet, I held my tongue. 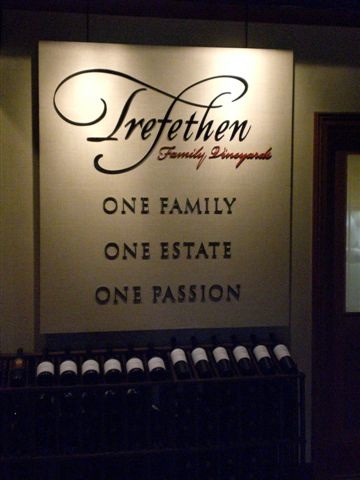 The time had escaped and the traffic on Hwy 29 continued to build. I resolved to stop into the same comfortable place I visited on the previous trip… Trefethen. There were two purchases to be made. One was their excellent dessert wine that I had sampled on my first trip, the Estate Late Harvest Riesling. The second was an expensive bottle of Halo, their premium Cabernet. They had run out of the year currently being marketed, so I was offered a bottle of the 1999 vintage at the same price. My ‘99 Library Estate Cabernet, acquired following my first visit, was memorable, so I believed this should be even better. As of this writing, I still do not know, because a special enough occasion has not come along to warrant its “cracking.” Soon, however… soon.

Sensing that my luck would expire if I pressed onward to another vineyard, and due to the fact that we were hungry and wanted to eat seafood in Sausalito on the way back, I programmed my little British girlfriend to take us to the spot that my wife had remembered from a trip she had taken to the Bay Area, years ago. "Ms. Garmin" got us to the restaurant flawlessly, but I must confess I was disappointed she could not find us a parking spot. For that, I was on my own.

Back near the water again, the cold wind began to whip, causing the discomfort factor to kick-in. Yet during our forgettable meal (as compared to the fare at lunchtime), my mind wandered to several unrelated topics (as it is inclined to do, without warning). The first was how much better that seafood was in Houston. Next was how horribly expensive this place was as compared to those same Houston restaurants. Finally, my thoughts drifted to a resolve that I had to return again to Napa very soon, with a larger agenda of wineries to visit (well planned for maximum efficiency) and either alone or with someone who shared the same passion for such a quest. Cathy had been (as she always is) great company, but wineries alone would not be her idea of fun. My 27 year old son would turn out to be the right companion for this adventure. We did return, and my next account will tell the story.