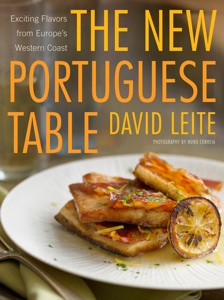 David Leite is an American of Portuguese descent who traveled to Portugal in the 1990s in search of his culinary roots.  Along the way, he discovered that the cuisines of Portugal's eleven regions, including the islands of Madeira and the Azores, were surprisingly different from the Portuguese-American foods he'd grown up eating at home in Massachusetts.  That revelation led to his writing The New Portuguese Table (Clarkson Potter, 2009), a beautifully designed cookbook showcasing his favorite recipes from home cooks and restaurant chefs in Portugal, Portuguese family and friends in the US, and his own kitchen experiments in New York.

While researching the book, Leite (owner of the food website, www.leitesculinaria.com)  became so enamored of Portugal that he even learned the language and took out Portuguese citizenship.  And his passion for the country fills every page of the book, making you want to follow in his footsteps and eat your way around Portugal from the cool, green north to the sunny sands of the south.

After a brief introduction to the culinary regions, traditional dishes, and varieties of wines in Portugal, Leite provides a useful section on the ingredients in the Portuguese pantry before launching into the recipes themselves.  His writing style is entertaining, engaging, personal, and direct.  (It's easy to see why he's won several food-writing awards.)  Reading these recipes will definitely make you hungry for Portuguese food.

If you're a newcomer to the subject, don't expect a comprehensive book about the traditional dishes of Portugal.  Leite makes it very clear that he has chosen recipes that appeal to him personally.  Some are indeed traditional, with a long history in that country. Others come from modern restaurants there, either directly from the chefs or deconstructed, reproduced, recreated, or redefined by Leite in his own kitchen.

If you think Portuguese cooking might be too far out for your tastes, think again.  Some of the recipes will already be familiar to American palates, especially those from the Deep South.  Who knew that the Portuguese also make Tomato Jam, Sweet Red Pepper Jam, Orange Cake (with olive oil instead of butter), and Cherry Cordial?  Black-Eyed Peas with Onions and Red Pepper, a dish from one of his immigrant relatives, is surprisingly similar to the popular black-eyed pea salad called Texas Caviar.  And others, such as Salt Cod and Shrimp Fritters, red and white gazpachos, and caramel-crusted Rosemary Custard are first cousins of those same dishes next door in Spain.

For less familiar flavors, try the Grilled Fava Bean Soup with Apples, the classic clams with sausage and ham cooked in a cataplana (a special Portuguese copper pan), and the Alentejan-Style Pork with Clams, seasoned with plenty of chopped fresh cilantro leaves, a staple in the Portuguese kitchen.  All of the recipes have been thoroughly tested by the author and his friends, so you can cook with confidence from this book.  I'm heading to the kitchen right now, to try out the Sweet Lemon and Black Olive Wafers, one of Leite's new recipes inspired by his love affair with Portugal.