"A" Is For Apples 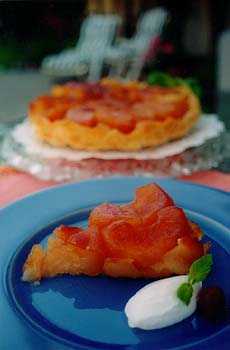 Apples, apples, everywhere — ahhhhh, it’s autumn. Whether you see them on a tree, at a supermarket, a farmers market or in a fruit bowl in the center of a table, apples add color to our lives. Crisp and juicy, we love to eat them out-of-hand. But for me, the apple’s greatest place is in the kitchen. Baking with apples makes desserts that are hard to resist. The one dessert that is “the apple of my eye” is the famous French style upside-down apple tart, Tarte Tatin.

Apples for this tart are cooked in a heavy-bottomed pan on top of the stove until the syrupy mixture surrounding them is amber-brown in color. Then the dessert is topped with a thin pastry circle, and finished in a hot oven. Golden Delicious apples are ideal for this dish. They hold their shape after cooking which makes the dessert quite attractive when unmolded. And since the golden delicious variety is a sweet one, you don’t need a lot of sugar in the recipe.

To unmold the tart, cool 10 minutes after removing the pan from the oven. Center a serving plate over the top of the pan, invert and slowly lift the heavy-bottomed skillet from the dessert. For vegetable lovers, I offer a savory version of the tart, an Onion-Leek Tarte Tatin. Thinly sliced onions and leeks are cooked to bring out their natural sweetness, then chopped tomatoes are added to the mixture to add their own sweet tang. The pastry that tops the Onion-Leek Tarte Tatin is the same as the one for the Apple Tarte Tatin except for the addition of some finely grated Parmesean cheese to the mixture.

Combine the flour and salt in a large bowl; stir to blend. Using a pastry blender, cut in the butter until mixture resembles small peas. Cut in the solid vegetable shortening until mixture resembles coarse meal. Sprinkle one tablespoon at a time over the flour mixture, stirring with a fork until the dry ingredients are evenly moistened and a cohesive mixture forms. Form into a ball, then flatten slightly to form a round disc; wrap dough in plastic wrap and refrigerate at least 1 hour. Makes enough pastry for one tarte tatin.
Note: To make a savory pastry for the Onion-Leek Tarte Tatin, toss 2 tablespoons finely grated Parmesean cheese into the flour-fat mixture. Add the water, form into a disc and chill as directed above.

Assembly: Prepare either apple or onion topping. (Apple topping is in an ovenproof pan. For the onion tarte tatin, place a parchment round in a clean 10-inch ovenproof pan and spoon the onion mixture into the pan. Adjust rack in middle of oven and preheat to 450 degrees. Roll out dough on a lightly floured to a 12-inch circle, about 1/8-inch thick.

Roll the pastry onto the rolling pin to maintain its shape without stretching it, and transfer it to cover the topping. Tuck the edges down around the topping. Bake in the preheated oven for 25 to 30 minutes or until golden brown. Remove from the oven, cool for 10 minutes, then invert onto a serving plate (for the onion tarte tatin, remove the parchment liner).

Put the butter into a heavy-bottomed ovenproof skillet. (I use one that is close to 10-inches in diameter and at least 2 1/2 inches deep with straight sides.) Melt butter over medium heat, sprinkle sugar evenly over butter. Stand apple halves tightly in pan — the cut side of each apple half should touch the back of the apple half in front of it. This will form a circle with one side of each apple half touching the edge of the pan. Stand apple halves in the center. All apples will appear above the pan’s rim. After cooking the apples will soften (if you have apple halves remaining, wedge them into the pan).

Continue cooking apples over medium to medium-high heat for about 30 minutes. Juice from the apples will dissolve the sugar, then as you cook apples the juice will evaporate allowing the sugar to cook to the caramel stage. Cook until the sugar syrup surrounding the apples is golden amber in color; set aside.
Note: Serve each slice of the apple tarte tatin accompanied by lightly whipped heavy cream or Creme Fraiche.

Cook onion slices over medium-low heat in a large covered skillet with the olive oil for 15 minutes, stirring occasionally. Remove cover, stir in the salt and sugar. Raise heat to medium and cook another 15 minutes, stirring frequently, until the onions are golden brown. Stir in tomatoes and pepper to taste and cook 2 minutes more; set aside.
Note: After inverting the tarte, decorate top of onion mixture with chopped parsley.