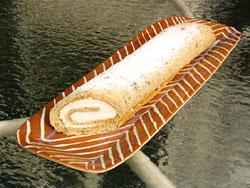 Sometimes dessert making is a challenge. One challenge that many home bakers shy away from is making a dessert roll. They are convinced that a thin flat cake cannot be rolled into a cylinder without forming gaping cracks and ending up unattractive and unappetizing.

The following tips for making an All-American Banana Roll will show even the most wary baker that it is possible to roll a cake successfully, with beautiful results.

Perhaps the most unusual thing about the banana sheet cake that forms the roll is that it is a buttercake rather than the traditional, easier-to-roll spongecake. A buttercake's density makes it less flexible than an airier cake, and therefore subject to cracking when rolled, but after spending years in the kitchen, I offer a set of foolproof instructions for taking the frustration out of creating a rich, irresistible cake roll.

* For baking the cake, I use an aluminum 12" x 15 1/2" inch baking sheet. It is larger than the standard 10" x 15" inch jelly roll pan and allows for a thinner cake. These large pans are available in hardware stores, and the only ones I have encountered have a nonstick finish, which is fine, but not necessary for baking this cake. A regular jelly roll pan will also work in this recipe, but you may have to hold back some of the batter.

* Spread the batter very thin, between 1/4" and 3/8". (It will increase in volume in the oven.) You are using the same amount of batter that goes into an 8-inch round cake layer, and at first you won't believe it will cover the entire baking sheet, but it will. You do not have to rush.

* Bake the cake quickly in an oven hotter than for a single layer. Eight to ten minutes at 375ƒF will ensure that the cake is fully done, but leave it supple and moist for rolling.

* After it comes out of the oven, cover the cake in the pan with a foil tent. The enclosure holds the moisture in as the cake cools, and the tent shape keeps the foil from sticking to the surface of the cake.

* Lining the pan with foil before spreading the batter may be the single most important factor in creating a successful dessert roll. When the cake is cooled, it will release easily from the foil, as it would not from any other material such as parchment or waxed paper. And the side of the cake that is next to the foil will be expecially moist and conducive to rolling.

* Filling for a cake roll should have body, not be runny. In this case the filling is whipped cream that is beaten stiffer than for most desserts. It will coat the cake layer, sticking to it and staying in place when rolled. As you roll the cake both the foil and the filling will support the thin cake layer, keeping it from collapsing on itself.

* Once you start rolling, just keep on rolling along. Resist the temptation to inspect the cake for cracking during rolling. Hesitation can cause cracks.

* The point of these techniques is to reduce the incidence of cracking when the cake is rolled, but should you end up with a few cracks you have not lost your chance for a great-looking cake. Sprinkle it with powdered sugar or spread with a thin layer of whipped cream, turn the lights down low, and you won't fail to impress your family or guests.

All-American Banana Roll
serves 12
Extra bananas on hand? Unexpected company? Actually, don't wait for an excuse to make this dessert. The cake doesn't take long to make, and assembling it into a rolled dessert can come soon after baking because the thin cake cools quickly.

One 8-inch round cake layer may be made with this batter. Prepare as directed below. Bake in a 350-degree oven for about 30 minutes.

Adjust rack to lower third of oven and preheat oven to 375 degrees. Lightly grease a small area in the center of the baking sheet with solid shortening. Line a 12 x 15-1/2 x 1/2-inch baking pan with foil, leaving a 2-inch overhang at each short end (the dab of shortening holds the foil in place). Grease and flour the foil. Sift the flour, baking soda, baking powder, and salt. Combine the mashed banana, sour cream and lemon zest in a small bowl.

Using an electric mixer, cream the butter until it is smooth and lighter in color. Add the sugar and scrape the mixture clinging to the sides into the center of the bowl. Continue to cream until the mixture is light and fluffy. Add the egg and continue to beat until the mixture is quite fluffy. Add half of the flour mixture until blended. Then add the banana mixture, blending well. Add the remaining flour mixture, blending until smooth.

Scoop the thick batter onto five different areas over two-thirds of the prepared baking sheet. With a metal spatula, spread and coax the batter to cover the two-third of the sheet. Now extend it to the rest of the sheet in as even a layer as possible. Bake for 8 to 10 minutes, or until the cake is light golden brown, the sides are beginning to contract from the metal, and the cake springs back when lightly touched in the center.

Remove the pan from the oven. Using a thinbladed knife, gently release any portion of the cake sticking to the long sides of the pan. Pull up on the foil overhangs, one at a time, to release the foil from the pan's edges. Lifting up on the flaps, transfer it to a large rack to cool. Place a sheet of foil over the cake, and manipulate the foil in a tent fashion. Cool for 30 minutes, then proceed to assemble the roll.

Spread the cream evenly over the cake with a rubber spatula, up to 1-inch before reaching the long end farthest from you. (The cake will be rolled lengthwise. Some of the filling will move to that end as you roll.)

Begin rolling by flipping the edge of cake nearest you over onto itself. Then, with the aid of the foil that extends on either side of the cake, roll the cake lengthwise until you reach the other end. With your hands, wrap some of the foil around the roll to assist you in rounding the shape as you work toward the other end of the cake.

Cut each end of the roll on the diagonal for eye appeal, and sprinkle a light coating of powdered sugar over it. Lift it onto a serving plate with a long, wide spatula or a baking sheet without sides.

Filling: Combine 3/4 cup heavy cream, 2 tablespoons sour cream, 1 tablespoon sugar and 1 teaspoon vanilla in a 1 1/2-quart mixing bowl, and whip them until it is soft, shiny, and smooth, but stiffer than for most desserts.