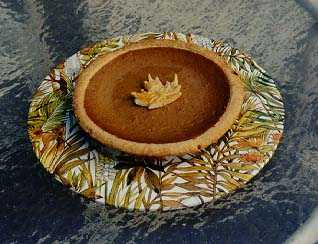 No Thanksgiving is complete without a taste of pumpkin. And, if you choose to stick to a longstanding tradition, chances are you'll serve pumpkin as the dessert course in your Thanksgiving feast. For many of us, just thinking about a sweet, spicy pumpkin dessert makes our taste buds come alive. A light, creamy pumpkin chiffon pie, a contemporary alternative to the traditional favorite, is one way to make the finale to your meal especially memorable. The silky richness of the pumpkin chiffon provides the perfect counterpoint to a tender, flaky pastry or to a nut, gingersnap or graham cracker crumb crust. Even guests repleat with turkey and dressing won't be able to resist this new take on an old favorite.

The key to making this dessert a success is balance of flavor and texture. To compliment the pumpkin's delicate flavor, it's important to use just a hint of spices and a bit of finely grated orange zest. Too much spice and zest will overpower the pumpkin; too little and your pie filling will taste bland.

To achieve a full-bodied but tender texture use gelatin sparingly; too much will result in a rubbery texture. For a fresh creamy taste, lightly whip the cream before folding it into the filling mixture. It's better to underwhip the cream rather than overwhip it. Otherwise the chiffon will taste as if butter was added rather than heavy cream.

Fold only half of the whipped cream thoroughly into the pumpkin filling, then pour the filling into the pastry-lined pan. Spoon dabs of the remaining whipped cream on top. For a decorative touch, run the blade of a kitchen knife around the filling a few times just until the the two mixtures swirl together. It's fine to use canned pumpkin but you can easily prepare your own pumpkin puree. Split a 1 1/2 to 2 pound sugar pumpkin in half. With a spoon, remove the fibrous stringy portion and seeds. Place the halves on a baking sheet, cut-side-down and cover with foil. Bake in a preheat 350 degree oven for about 40 minutes, or until the flesh is tender when pierced with a fork. Remove from oven, and cool.

Remove the skin by slipping a paring knife between the skin and the flesh. Cut the flesh into small pieces, and place them in a food processor bowl. Process with short on/off burst until it is smooth, about 30 seconds. For a finer, smoother texture pruee, grind the flesh, a few pieces at a time, in a food mill. Cover, and refrigerate for up to 2 days. Makes about 2 cups.

Pumpkin Chiffon Pie
serves 6 to 8
You may use a nut, gingersnap or graham cracker crumb crust instead of the pie pastry by combining 1 3/4 cups crumbs with 2 tablespoons sugar and 3 tablespoons melted butter. Pat into the pie pan, and bake in a preheated 325 degree oven for 10 minutes.
Cool before filling.

At least four hours before serving the dessert, combine the orange juice and water in a small dish. Sprinkle the surface with the gelatin, and set aside for about 5 minutes to soften.

In a saucepan, combine brown sugar, pumpkin puree, spices, egg yolks, and salt. Cook over medium heat until thickened, stirring constantly. Remove from heat and stir in softened gelatin until it is dissolved. Stir in the orange zest and pour the mixture into a large bowl. Refrigerate just until mixture becomes cool and syrupy, about 30 minutes.

Whip egg whites until soft peaks form, then add the sugar and whip until slightly stiffer peaks form. In another bowl, whip the cream just until soft peaks form. Fold the egg whites into the mixture, then fold in half the whipped cream. Pour the filling into the pie crust. Spoon dabs of the remaining whipped cream on top. Run the blade of a kitchen knife around the filling just to swirl the two mixtures together. Refrigerate for about 3 hours or until set.