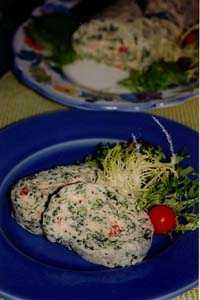 Sometimes we forget that baking can produce more than just sweets. When you think about it, you realize there is a wide variety of vegetable dishes that benefit from the baker's touch: Onions and mushrooms can be tucked into a tart or quiche or a mixture of zucchinis, tomatoes, red and green peppers and eggplant can be layered on puff pastry to resemble a pizza.

Sometimes I fold vegetables purees, such as spinach or Swiss chard into a classic souffle mixture to make a thin flexible layer to roll after baking. Even though the addition of the puree results in a heavier mixture so that the souffle doesn't rise as light and airy, here are three simple tips to aid in making it easy to roll:

* Drain the spinach well. You want the essense of the vegetable, not any extra liquid, or it can bake into a soggy tasteless layer. Squeezing the spinach through a potato ricer works wonderfully.
* Fold the egg whites in gently but thoroughly. They help sustain the puree to give it a light even texture.
* Don't overbake or the mixture will crack while rolling.

Spirals of spinach souffle and ricotta cheese, flecked with sun-dried tomato decorate a plate of grilled chicken or lamb handsomely. Serve it on a plate with a salad tossed with a simple viniagrette for lunch on a summer day. As a garnish, sprinkle toasted pine nuts over the salad.

Spinach Souffle Roll
serves 10
Rolling up a vegetable souffle is one of those dishes you can do ahead.

Adjust rack in center of oven and preheat to 425 degrees. Line a 15 x 10 x 1- inch jelly roll pan with aluminum foil, leaving a 3-inch overhang at each short end.

Grease and flour the foil. Drain spinach to remove as much liquid as possible. Puree spinach in food processor. In a saucepan melt the butter and stir in the flour. Cook for 2 to 3 minutes.

Do not allow the mixture to color. Off the heat, vigorously whisk in the milk. Return to heat and cook 2 to 3 minutes, stirring constantly until sauce is thick.

In a small bowl whisk the egg yolks lightly, stir in about 1/2 cup of the hot white sauce. Pour this mixture into the saucepan and cook an additional minute without boiling. Stir in the pureed spinach, stirring until well blended and smooth. Stir in the seasonings. Set aside to cool.

Whip the egg whites until stiff shiny peaks form. Stir/fold about a third of the whites to lighten the mixture. Then fold in the remaining whites. Spread the mixture evenly in the pan. Bake in the oven 10 minutes. Remove from oven to a cooling rack. Immediately place a long strip of foil over the baking pan to contain the spinach roll's steam while cooling.

To make the filling, mix the ricotta cheese with the finely grated Parmesan cheese, the oil-cured sun-dried tomatoes, and the parsley.

To assemble, pull up on the foil overhang to release the edges. Lift the roll on its foil to a work surface. Spread the filling evenly over the roll. With the aid of the foil, roll lengthwise. Gently lift the roll at both ends to a serving platter, seam side down.