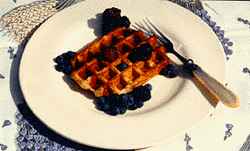 According to an old Betty Crocker cookbook, "a crusader wearing his armor, accidentally sat in some freshly baked oat cakes, flattening them and leaving deep imprints of the steel links." And, so it appears, one of the first waffles was created. Thank goodness it's not as much trouble to make golden, crisp waffles today.

Now, not only can we choose from several types of waffle irons to give us that distinctive honeycomb-like grid (from stove-top to electric models) we can even buy packaged, frozen waffles that you pop in the toaster and serve in a matter of minutes.

Most recipes and methods for non-yeast waffles are similar to those for muffins. Wet ingredients (usually milk, eggs, and some melted butter) are quickly added to dry ones (such as flour, salt, baking powder and some sugar). Even savory waffles benefit from the addition of some sugar for flavor, tenderness, and crispiness. To create a lighter waffle, separate the eggs, whip the whites until soft peaks form, then fold the whites into the batter at the end.

Here are some quick and easy ways to make perfect homemade waffles fresh from your kitchen:

* waffle makers with non-stick grids eliminate the need to grease the iron between waffles, thus reducing fat and calories

* for waffles at their best, bake the waffle batter within 30 minutes of making it (when the leavening ingredients are most effective)

* for extra-crispy waffles, bake longer than the recipe indicates it's convenient to make a batch ahead to freeze for later use. Underbake them slightly and cool the waffles before wrapping them individually in aluminum foil before freezing

* to remove waffles from the waffle iron, lift them out with the tines of a fork. for a sweeter, crisper waffle, add one to two tablespoons additional sugar to the batter.

* for best flavor and a crispy texture, serve waffles hot. (Waffles lose crispiness as they cool.)

* to keep warm while preparing additional waffles, set waffles on a baking sheet and place in a preheated 225 degree oven.

Easy Waffles
makes eight 4 1/2-inch square waffles (or four two-section waffles)
These waffles were made in an electric Belgian waffle iron, with two 4 1/2-inch square non-stick grids. This is an all-purpose batter that lends itself quite well to flavor variations.

Preheat the waffle iron for at least 10 minutes before using. Sift flour, baking powder, sugar and salt into a large bowl. Melt butter, stir in milk, then egg yolks. Add milk mixture to flour mixture and whisk to combine. In a small bowl with an electric mixer, whip egg whites until soft peaks form. Fold into batter just until blended. Pour about 1/2 cup batter over the bottom of each hot waffle grid. Close lid and bake until golden (when almost all the steam stops flowing out of the iron) about three to four minutes.

corn waffles: substitute 1/4 cup cornmeal for the flour and add 1 cup fresh corn to the batter before folding in the whites.

cheddar and green chile waffles: fold in 1/2 cup shredded sharp cheddar cheese and 2 teaspoons finely chopped fresh (seeded and cored) Anaheim chile into the batter before folding in the whites.

spicy waffles: substitute brown sugar for the granulated and 1/2 teaspoon ground cardamom or ginger. SautČ apples slices in butter and some sugar and use as a topping for the waffle.

chocolate waffles: fold in 1/3 cup finely chopped semisweet chocolate into the batter. other dessert waffles: sprinkle chopped nuts or coconut over the batter after pouring it into the iron. Serve with fresh fruit and whipped cream or frozen yogurt.