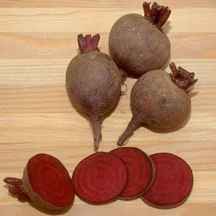 Anyone who has ever thumbed through a children's alphabet book realizes the importance of beets. More often than not, beets are the B word. Nothing could be more appropriate, according to Lucius Junius Moderatus Columella, one of the world's first food writers. Columella, who discoursed elegantly, even poetically, on agricultural matters during the first century A.D., claims that the beet got its original name, beta, because of its resemblance to the second letter of the alphabet.

Beets continue to make luscious illustrations because of their varying shapes, from squat to ovoid to long and turnip-shaped. Today's beets also come in an array of colors: red, golden-yellow, white. One variety, the Chioggia, has a cherry-red exterior that, when cut, reveals its true stripes, which are alternating red and white. Mixed together in a bowl, an assortment of many-colored beets makes an intriguing salad, especially since all beets taste just about the same. They must be cooked separately, however, because the red dye, betacyanin, leaches into the cooking water. Some say that a dash of vinegar or lemon juice added to the cooking water reduces leaching.

In Columella's time, and before, beets were more monochromatically described as either "black" or "pale," but they were still eaten everywhere from Britain to India. Perhaps it was instinct that motivated their widespread consumption, since beets are, from the bottoms of their swollen hypocotyls to the tips of their leafy greens, exceptionally high in nutrients as well as fiber. And yet, so learned an expert as John Gerard wrote in his 1597 Herball that the beet "eaten when it is boyled...nourishes little or nothing, and is not so wholesome as lettuce." On the other hand, he admits that it "will make many and diverse dishes, both faire and good."

Indeed, there seems no end to diversity: the roots may be roasted, boiled, or steamed, served hot or cold, pickled, and made into hot soup, cold borscht, or an unusual (and, to some, unimaginable) wine. One recipe for the latter suggests that rhubarb be used as the acid. Beet greens are prepared like any other greens and have even more nutrients than the vegetable's lower extremities. In fact, the greens were originally the only parts of the vegetable considered edible. In this country the beet has become regionally compartmentalized: Greens are most popular in the South, the roots appeal to New Englanders for use in both red flannel hash and sweet-and-sour Harvard beets (or Yale beets, depending on preferences more psychological than culinary). The Pennsylvania Dutch classic, pickled beets and red eggs, is crimson testimony to the vegetable's painterly talents. Beet dye was, in fact, used in colonial times to add a rosy aspect to icing for cakes and to the colonial favorite, pink pancakes.

Perhaps the most fascinating member of beetdom is the beet we don't eat directly at all -- the white, tapered sugar beet, which is 8 percent sugar by weight. In the late eighteenth century, Franqois Achard, a Berliner of French origin, introduced the process of producing sugar from these beets. Ultimately, this resulted in the ability to satisfy, on a worldwide basis, the basic human craving for sugar. According to Foodbook author James Trager, "In terms of botany, the development of the sugar beet surpasses any other achievement of human ingenuity in food creation."

Storage
Remove the tops (leaves and most of stem). Refrigerate, unwashed, in a plastic bag for up to 1 week. Greens may be used in salads or for cooking.

Nutritional Value
Good source of potassium, and vitamins C and A
55 calories per cup

Preheat the oven to 375 degrees Farenheit.

Steam the beet greens for 2 minutes; squeeze them dry and chop finely. In a skillet, heat 2 tablespoons of the oil and the butter. Saute the garlic and mushrooms for about 3 minutes. Add the beet greens and stir well to combine.

Remove the pan from the heat and season to taste with salt and pepper. Stir in the cheeses and eggs. Pour the mixture into a greased shallow 9-inch baking dish. Sprinkle with the bread crumbs and the remaining 2 tablespoons oil and bake for about 35 minutes, or until golden-brown.

When the beets are cool enough to handle, slip the skins off and slice the beets about 1/4 inch thick. In a skillet, heat the butter. Add the shallot and cook for about 2 minutes. Add the apple, sugar, salt and pepper, and vinegar; simmer, uncovered, for about 10 minutes, or until the apples are tender. Add the beets and cook for another 3 minutes. Sprinkle with walnuts and serve.

When the beets are cool enough to handle, slip the skins off. Slice the beets and puree them in a food processor with the chicken stock. Stir in the buttermilk, lemon juice, and cucumber. Season with salt and pepper. Serve chilled.

Combine the beets, both beans, onion, and capers in a salad bowl.

To make the dressing: Place the dill, garlic, and vinegar in the bowl of a food processor; process until smooth. Add the oil slowly, until the dressing is emulsified. Season with salt and pepper and pour over beet mixture. Toss well to combine.