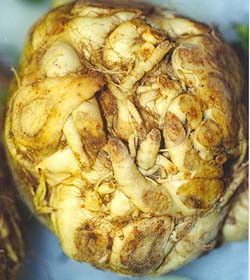 Despite its association with root vegetables, celery root (or celeriac, as it is sometimes called) has a certain panache. Perhaps this is due to its honored place in the French specialty, celery remoulade, or because it makes such luxurious pairings with dried cepes or with tender artichoke hearts. In the form of a distinctive salad or soup, celery root is often served apart from the meal, either first or as a separate course. As one old American cookbook suggests: "Serve....after the roast-piece of the dinner."

Most cookbooks, however, simply ignored the vegetable, also called soup celery, celery knob, and turnip rooted celery -- by any name. In fact, it enjoys wide popularity in this country only in German communities, where it is pureed and in stews. Celery Root has a pungent celery-like flavor and is, in fact, a special variety of celery, developed by gardeners during the Renaissance. In recipes calling for cauliflower, fennel or cardoon, celery root makes an interesting and unexpected substitute if not a quantum improvement.

Market Selection
Vegetables should be firm with no brown soft spots.
Sprouting tops should be bright green.

Storage
Wrap celery root in plastic and refrigerate for up to one week.

Nutritional Value
Rich in phosphorous and potassium.
40 calories per cup

In a large pot of boiling water cook the vegetables and garlic until tender, about 40 minutes. With a slotted spoon, remove the vegetables to a food processor and puree with the butter and the milk. If the consistency is too thick, add some vegetable cooking water until you have the desired consistence. Season with salt and cayenne. Spread in shallow serving dish and sprinkle with chives.

In a large saucepan heat 2 tablespoons butter. Cook mushrooms until edges are brown, about 8 minutes, and remove with a slotted spoon. Set aside. Add remaining butter to pot and cook leek and celery until wilted. Stir in tarragon, celery root and stock. Bring to a boil, then partially cover and simmer 20 minutes or until celery root is tender. In a blender or food processor puree mixture in batches. Return to pot and stir in cream until well blended. Add portobellos and reheat gently. Taste for salt and pepper. Serve sprinkled with celery leaves.