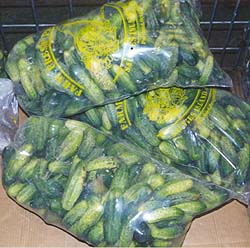 Among the proofs of Thomas Wolfe's surpassing literary skills is the fact that he was once able to write lustily about the cucumber. In his description of Eugene Gant's raiding the refrigerator in Of Time and the River, he writes of a man who can't wait to sink his teeth into "a speared forkful of those thin-sliced cucumbers-ah! what a delicate and toothsome pickle they do make; what sorcerer invented them..."

In fact, over the centuries, the services of sorcerers have often been required to make cucumbers taste like anything. One of the oldest cultivated plants, cucumbers were discovered in Asia by the Romans, who brought them home and successfully transplanted them. However, when they attempted to extract some flavor from their purloined produce, they realized that their work had just begun.

Records describe Roman cooks seasoning cucumbers with everything from
sun-made wine and pennyroyal to "a little sylphium," an expensive and highly esteemed flavoring. They boiled the bland vegetable with precooked brains (presumably animal brains) and added honey and cumin at serving time. Something must have worked because we know that Emperor Tiberius liked cucumbers so much, he had them grown in carts that could be wheeled out for a daily sit in the sun to help them thrive, even off-season. Tiberius wasn't the only cucumber lover, according to the ancient Sumerian legend of Gilgamesh, which describes people eating wild cucumbers, among other things too squirmy to mention. Columbus brought cucumber seeds to Haiti, possibly in an attempt to get rid of them once and for all. As luck would have it, the seeds thrived and spread over North America, where Native Americans, especially the Pueblo Indians, became the cucumber's biggest fans to date.

Early American cooks seemed no less determined than their Roman antecedents to enjoy cucumbers and began developing recipes for frying, stewing, battering, creaming, pickling, steaming, and stuffing the vegetable. In the late 1700s the Shaker religious communities included in their Manifesto the proclamation that cucumbers "can be dressed in more palatable and suitable ways than most any other vegetable except tomatoes."

Our present heritage of preparations, raw and cooked, is rich and universal. There are the Indian condiment raita and the Finnish salad kurkkusalaatti, as well as Japanese steamed cucumbers. True fanatics may wish to revive the once-popular three-week cucumber diet, which promised various cures and nice skin to boot. Current scientific analysis has lent support to some of these claims, showing that the vegetable is exceptionally high in vitamin E.

Along with regular green cucumbers, we are seeing unusual varieties, like the pale seedless Armenian (or Turkish or Syrian) type, an intriguing-looking ivory-white variety, and the lemon-shaped, yellow-green lemon cucumber. Although a staggering quantity of cucumbers-600 million pounds-is grown annually in California, Florida, and Texas, the United States imports 300 million pounds a year from Mexico. That's a lot of toothsome pickles.

Market Selection: Field-grown slicing cucumbers are the most common,
all-purpose variety. In addition, one can also find long hothouse or
English cucumbers (usually packaged in a tight wrap of plastic),
bumpy-skinned pickling cucumbers, extra-slender Japanese cucumbers, and squat, pale, lemon cucumbers. All types should be firm and unblemished.
Availability: Year-round but best in spring and early summer
Storage: Seal in a plastic bag in the refrigerator for up to 1 week.
Flavor Enhancers: Dill, chives, tarragon, mint
Equivalents: 2 medium cucumbers (8 inches) = 1 pound
1 pound, peeled and seeded = 2 cups, sliced
Nutritional Value: Good source of vitamins A and E
45 calories per medium cucumber
Cooking and Handling Notes: If cucumbers are waxed, make sure to peel them.
To seed a cucumber, cut it in half lengthwise and scrape out the seeds with a small spoon.
Cucumbers should be cooked briefly, either by blanching or sautéing.

In a medium skillet, heat the butter. Add the shallot and cook until soft. Add the cucumber, peas, and sugar. Cook over high heat for about 1 minute. Add the stock, bring to a boil, lower heat, and simmer for 2 minutes. Stir in the cumin and season with salt and pepper.

In a large skillet or sauté pan, heat the butter and 2 tablespoons of the oil. Dredge the scallops in flour and sauté them for about 2 minutes. Remove and reserve.
Add the remaining 2 tablespoons of oil to the skillet and sauté the cucumber until lightly browned. Reserve with the scallops. Add the tomato, tarragon, and sour cream to the pan and bring to a boil. Reduce the heat and simmer for about 5 minutes, or until the sauce has thickened. Return the scallops and cucumber to the sauce and heat through. Season to taste with salt and pepper.

Combine all of the ingredients in a food processor; process
to a medium-fine texture. Season to taste with salt and pepper. Let stand for at least 2 hours before using for flavors to develop fully. Delicious with grilled meats, fish, or poultry.

Toss the cucumber with the salt and let stand for 20 minutes. Drain, rinse in a colander, and pat dry. In a bowl, dissolve the sugar in the vinegar. Add the cucumber and toss to coat. In a small skillet, heat the sesame oil. Add the ginger, chili peppers, and peppercorns. Cook for about 30 seconds, or until the peppers are dark red and the spices are fragrant. Let cool completely and combine with the cucumber mixture. Let marinate at room temperature for 3 hours, or cover and refrigerate overnight.

Combine the cucumber, cantaloupe, honey, lime juice and orange juice in a food processor; process until smooth. Stir in yogurt and mint. Serve over ice or very well chilled.