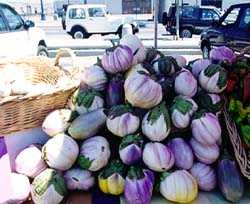 What's round and oblong and big and small and white and purple and green and striped and orange and lavender and mottled and black? What else but eggplant? Or more precisely a dozen eggplants. True, most supermarkets are unlikely to feature eggplants on such a chromatic scale, but ethnic markets often offer colorful varieties that are downright ostentatious.

There is, for example, the lavender and white-striped Listada de Gandia, or the heart-shaped Rosa Bianco, the white-skinned Long White Sword, the Pink Bride, and the provocative Black Beauty. You may even come across the rare, tomato-colored Small Ruffled Red, a bitter variety popular in Oriental sauces and in Thai and Cambodian dishes. You will soon discover, however, that beneath their alluring exteriors, most eggplants taste pretty much the same. Size and shape are probably more important considerations than color in selecting a specimen appropriate to your eggplant intentions.

Syrians and Turks insist that there are more than a thousand ways of preparing eggplant. It seems like a good idea to have at least one of them in mind when buying an eggplant, since it does not, despite its versatility, make very good crudits. Nor can it be tossed raw into a salad or even briefly cooked, al dente style. Eggplant can, however, be sauteed, baked, broiled, roasted, grilled, stuffed, and stewed, all of which makes it a major ingredient in many of the world's cuisines.

In the classic French ratatouille, the globe is surrounded by garlic-scented tomatoes, onions, peppers, and zucchini, essentially the same ingredients found in Italy's caponata. In other cuisines, it becomes eggplant Parmesan, Greek moussaka, and Romanian caviar. And there is the pickled eggplant of Almagro, the Castilian town that became known throughout Spain for this one culinary contribution. Simmered for hours in olive oil, eggplant can become imam bayeldi, the legendary dish of Turkey, as famous for its flavor as for the following tale. As the story goes, a bride prepared this dish every night for her new husband because he loved it so much. One night, when she finally ran out of oil and informed him she could not make imam bayeldi, he collapsed from dismay. Putting aside for a moment the obvious Freudian implications, this tale is a testimony to true eggplant fervor.

With this same level of enthusiasm, the inhabitants of Mediterranean countries greeted Arab traders who first brought them eggplant in the Middle Ages. In fact the word aubergine -- used in France, Germany, and England -- is Arabic in origin: al-badinjan, which became the Catalan alberginera, and later evolved into aubergine. The word eggplant derives from the white species, which closely resembles a hen's egg.

From the Mediterranean, the eggplant soon traveled to the New World. At Monticello, Jefferson planted seeds and cuttings in the late eighteenth century. The famous New York restaurant Delmonico's is often credited with introducing eggplant to the country's more serious eaters in the late 1800s. Although many nineteenth-century American cookbook writers mentioned eggplant, most of them did not know what to make of it --- literally. Miss Leslie, author of Seventy Five Receipts (1827) and the New Cookery Book (1857), warned of the bitter flavor and commented that though often served at dinner, eggplant was more properly a breakfast dish. In her Philadelphia Cook Book (1886), Mrs. Rorer's recipe for the unceremonious-sounding "Fried EggPlant No. 1" ends with the counsel, "Tomato catsup should be served with it." Fanny Farmer's first edition (1896) includes only two halfhearted suggestions. Such reticence had a formidable predecessor in John Gerard's 1597 Herball, which warned of the eggplant's "mischievous quality; the use whereof is utterly to be forsaken."

The eggplant, a native of India, is a member of the deadly nightshade family, which includes many poisonous plants as well as potatoes, bell peppers, tomatoes, tobacco, and a potent hallucinogen called jimson weed. Because of eggplant's tendency to discolor when exposed to air, its flesh should be cut with a stainless-steel blade and the cooked vegetable mashed with a wooden utensil. Raw eggplant has a spongy texture and absorbs enormous amounts of oil. But the patient cook knows that eventually the sponginess begins to break down from the heat of cooking; at that point, much of the excess oil is expelled.

Finally, we have the recommendation of many of the world's eggplant authorities that chopped or sliced eggplant be rinsed and salted to draw out bitterness and excess moisture. On the other hand, there is the informed opinion of James Beard, who unequivocally condemned such advice as nothing more than an old wives' tale.

Storage
Refrigerate in a plastic bag for up to 5 days.

Nutritional Value
1 cup cooked eggplant = 38 calories; eggplant contains some protein and provides vitamins A, B complex, and C, as well as phosphorus, potassium, and calcium.

Cooking and Handling Notes
To bake an eggplant: pierce the skin in several places with a fork and place the eggplant on a baking sheet. Bake in a preheated 400 degrees Farenheit oven until the eggplant collapses (about 40 minutes for large and 20 minutes for Oriental eggplant). Let cool and use as recipe directs.

In a saucepan, heat the oil. Cook the garlic and onion until wilted, about 3 minutes. Add the eggplant and tomato and cook for 5 minutes. Stir in the tomato paste, oregano, tomato juice, stock, and parsley. Bring to a boil, lower the heat, and simmer, partially covered, for 15 minutes. Season with salt and pepper.

Sprinkle the bread slices with cheese, and toast or broil them until the cheese is melted and lightly browned. Ladle the soup into bowls and top with cheese toasts.

In a medium skillet, heat the oil. Cook the garlic, onion, and pepper for 5 minutes. Add tbe vinegar and continue cooking until the mixture is thick and syrupy.

Add the eggplant with the remaining ingredients. Cook for another 3 minutes and taste for salt. Serve warm or at room temperature with crackers or bread or as part of an antipasto platter.

Meanwhile, preheat the grill. Place the eggplant slices close to the heat source and cook for about 4 minutes, or just until light char marks appear. Turn and cook on the other side. Serve immediately.

Rigatoni with Eggplant and Lamb
serves 4-6

In a skillet, heat the oil. Add the onion and lamb and cook until the lamb loses its pink color. Add the eggplant and cook until lightly browned. Stir in the tomato, oregano, and stock. Bring to a boil, lower heat, and simmer for 8 to 10 minutes, or until the sauce thickens slightly.

Stir in the olives, capers, and cheese. Toss with the rigatoni and serve.

Meanwhile, make the filling by processing all of the filling ingredients in a food processor until smooth. Remove eggplant from oven and spoon 2 to 3 tablespoons of filling onto each eggplant slice. Fold the sides over the filling and place the pockets, seam side down, on a greased shallow baking pan. Sprinkle Fontina cheese over the pockets and bake for 15 minutes.