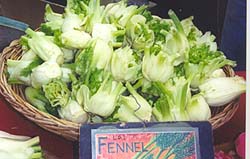 The proof? Walk over to your refrigerator crisper drawer in the middle of a day when you're tired of apples, and saltines and leftover Brussels sprouts, and chocolate chip cookies, and all the things you've been snacking on all afternoon. Snap off a crisp piece of fennel and bite into it. Everything's good about it.: the crunch, the spicy smell, the satisfying sweetness. That's fennel: just what you wanted even when you didn't know you wanted it.

We in this country owe much to the Italians and their restaurants and produce shops for familiarizing us with Florentine fennel, the vegetable they call finocchio. They braise it and serve it anointed with olive oil and shaved Parmesan; they marinate it with seafood and vegetables; they cook it on the grill with fresh fish or sausages; they slice it raw for antipasto. The 19th century writer Alexander Dumas reports that in Italy of his time, people often stuck a head of fennel under one arm, munching it with bread for lunch or dinner. Thomas Jefferson had been introduced to fennel by his Monticello neighbor, Philip Mazzei, a Florentine grape grower and expert on exotic plants.
Aside from Jefferson, perhaps only the Native Americans made much culinary use of fennel in our own country, consuming its seeds, leaves and roots as well as its stems, which they ate raw like celery sticks. The also made a concoction with fennel and barley water, reputed to increase the flow of milk in nursing mothers. Not until the present century, with its increased Italian immigration, did a larger American audience develop for fennel. High in protien, this low calorie member of the carrot family can be prepared as a rich gratin, or a garnish, as a salad or a dessert, and everything in between.

Market Selection: Fennel is sometimes known as finocchio and Florentine
Fennel and is often confused with sweet anise. The bulbs should be white
and firm, with crisp stalks and green feathery leaves.
Availability: October through April
Storage: Wrap in plastic bag or wrap, unwashed, and refrigerate for up to 1 week.
Flavor Enhancers: Garlic, parsley, basil, tomatoes
Equivalents: 1 medium bulb = 2 cups, chopped
Nutritional Value: Rich in vitamin A, calcium, and potassium
30 calories per cup
Cooking and Handling Notes: Trim the root end of the bulb and the outer layer before cooking. Stalks should be discarded as they are tough and fibrous. Feathery leaves may be cooked or used as a garnish.
Basic Cooking method: Cook in boiling salted water 7 minutes. Steam for 10 minutes.

In a medium saucepan, heat the oil. Saute the onion, fennel, carrot and fennel seed five minutes. Stir in the potato and chicken stock and bring to a boil. Reduce heat, cover and simmer 20 minutes. Puree the mixture in a food processor with the cream. Reheat gently and season to taste with salt and pepper. Garnish with fennel sprigs.

In a large skillet, heat the butter. Saute the onion and fennel over medium heat for 10 minutes. Add the rice and stir to coat well with butter. Add the stock a ladleful at a time; stir until it is absorbed by the rice before adding the next ladleful. Continue until most of the stock has been added and the rice is tender but not mushy. Gently stir in the smoked salmon and cook another minute. Season with salt and pepper and garnish with fennel fronds.

Preheat oven to 375 degrees F. Grease a shallow 4 cup baking dish. Cook the potato and garlic in salted boiling water 15 minutes. Meanwhile, saute the fennel in butter for 5 minutes; add the stock and cook covered,
10 minutes. Drain the potato and garlic and place in food processor with fennel and cottage cheese. Puree until smooth. Season with salt and pepper. Pour into baking dish and sprinkle with Gruyere. Bake 25 minutes or until top is golden brown and bubbly.
Serves 6.

Jeannette & Louise are Bay Area freelance food writers and the authors of several books including Sweet Onions & Sour Cherries, A Good Day for Soup and A Good Day for Salad.