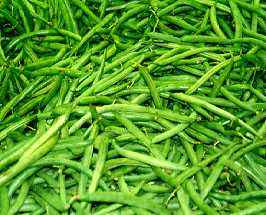 The three sisters of life -- that's what the Native Americans called their trio of essential vegetables: beans, corn, and squash. Green beans are an old New World food, known in Mexico for some 7,000 years before the arrival of the conquistadors. The first European to see them growing may well have been Christopher Columbus. When the green bean was brought back to Europe, it was instantly accepted because of its similarity to an existing vegetable, the broad bean. Green beans were also welcome because they resembled asparagus and could be prepared similarly. In fact, one seventeenth-century dictionary writer, Randle Cofgrave, called them "sperage beans." In Tuscany, the green bean's popularity won the Tuscans the nickname mangia fagioli, or "bean eaters."

The word haricot, which originally referred to the newly arrived green bean, is clearly French, but it is actually a corruption of the Aztec word ayacotl. The connection with Native Americans is perpetuated in the names of bean varieties such as Hopi String Bean and Cherokee Trail of Tears. Now enjoying near-universal popularity, fresh green beans are the main ingredient in many of the world's favorite dishes. German cooks make blind Huhn (blind hen), a savory combination of apples, carrots, bacon, and beans. A Bulgarian moussaka, called mussakes selen fassul, substitutes fresh beans and other vegetables for the eggplant and a yogurt mixture for the bechamel. Italians and Cajuns stew green beans a long time, smothered with onions and other vegetables; by contrast, beans prepared al dente, adorned with the pods and leaves of nasturtiums, come to us, not from the hot chef of the moment but from the eighteenth-century Shakers. Another delightful dish requires only a simple tossing of green beans with butter and savory, known as the "bean herb." Beans are also excellent pickled, a favorite treatment in Pennsylvania Dutch country.

Phaseolus vulgaris is the Latin name for the green bean plant. (Phaseolus means "boat" and refers to the pod that carries the beans.) Today's growers have developed different varieties depending on whether the vegetable is to be consumed fresh or grown to maturity and then dried. Several types of fresh and dried beans are often combined in salads and vegetable dishes for an interesting contrast of tastes and textures. Today's popular varieties include thin, round Blue Lakes and the flatter Kentucky Wonders, also called Old Homesteads; both have actually been around since the mid-1800s. Other choices include Italians or Romanos, those broad, flat, meaty beans that are either green or yellow, and another Italian coiled type, the green anellini. There is the slender haricot vert and the unusual purple beans called Royal Burgundy, which are most interesting when served raw in salads, especially since they turn a more ordinary green when cooked. Finally, there are yellow wax beans and any number of varietals referred to as snap, string, or simply green beans. Although many people still call the vegetable "string beans," stringlessness has been bred into most of today's varieties.

Market Selection
Kentucky Wonder and Blue Lake are the most common varieties. Yellow wax, Romano, and Chinese long beans have recently been making more frequent appearances on the greengrocer's shelf. All types should be crisp, unblemished, and bright in color.

Storage
Will keep for about 4 days, wrapped in plastic bag or wrap, refrigerated.

Nutritional Value
Good source of vitamin A and potassium.
40 calories per cup

In a large pot, heat the oil. Saute the onion, celery, pepper, and tomato for about 5 minutes. Add the stock and 2 cups water and bring to a boil. Add the barley, lower the heat, and simmer, covered, for 30 minutes. Add the beans and dill and cook for 10 minutes. Season with salt and pepper and serve.

In a medium skillet, heat 2 tablespoons of the oil. Saute the onion until it is golden in color. Add the walnuts and cook for another 2 minutes. Stir in the cayenne.

Place the onion-walnut mixture in a food processor with the egg, beans, lemon juice, and remaining 2 tablespoons of oil. Process until almost smooth. Stir in the dill. Taste for salt and pepper. Spoon into a crock and serve with bread or crackers.

Cook the beans in boiling salted water for about 2 1/2 minutes. Refresh them under cold water and drain. In a large bowl, combine the beans with the cheese and tomato. Whisk the dressing ingredients until well combined. Toss with the bean mixture and season with salt and pepper.

In a large skillet, cook the pancetta until most of the fat is rendered. Add the garlic and beans and cook, stirring, for about 3 minutes. Add the sage and season with salt and pepper.

In a large skillet, heat the oil. Saute the prawns until they are pink; remove them from the skillet and reserve. Add the garlic, ginger, and green beans to the same skillet. Cook, stirring, for about 2 minutes. Combine the soy sauce, sugar, and sherry and add to the skillet. Cover and cook for about 5 minutes; add the prawns. Cook for another minute; sprinkle with sesame seeds and serve.