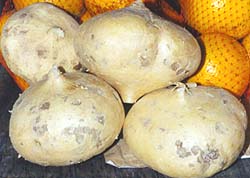 "A stranger in the produce section." These are the words that cookbook author Laurel Robertson used to describe a lumpy, odd-looking creature she discovered one day in the grocery store. Although it appeared about as promising as a dusty old stone, she followed her instincts and brought the inert-looking blob home for dinner. If she hadn't, she concludes her happy tale, she never would have met the jicama.

For those who still haven't met the jicama it is a vegetable humble, if not homely in appearance. For some reason it is never described for itself but always compared to something else. It doesn't even get much credit for its own crisp, just sweet enough taste, which is also usually likened to that of other vegetables. Use it like water chestnuts, some say, or grate it as a passable substitute for daikon. It is also characterized as a cross between an apple and a potato.

And yet nothing is quite like the jicama, a member of the morning glory family that hails from Mexico and South America. A cousin of the sweet potato, this underground tuber comes in two types: agua (watery juice) and leche (milky juice). Like the hot pretzels on the sidewalks of New York, jicama is a street food in its native habitat, sold with a squeeze of lime and a shake of fiery chili powder.

Also called the yam bean root, jicama ranges in weight from a few ounces to 6 pounds. Its crispy white flesh is hidden under a fibrous dust-brown skin, which must be completely stripped off. Like potatoes, jicamas can be steamed, baked, boiled, mashed or fried. Unlike potatoes, however, they can also be eaten raw. Sliced into wide sticks, jicama makes a crunchy carrier for guacamole and highly seasoned dips. Cut up into squares, it enhances fresh fruit salad, absorbing and reflecting surrounding flavors. It is equally versatile as a cooked vegetable -- sauteed with carrots or green beans, stir-fried with chicken or shrimp, or simmered in savory stews. Low in starch and calories, jicama is satisfying, flavorful and nowhere near as strange as it looks.

Storage
Store in a cool, dry place, uncovered, for up to 3 weeks. Cut pieces may be wrapped in plastic, and stored in the refrigerator for up to one week.

Cooking and Handling Notes
Rub a cut lemon or lime on the cut surface of jicama to maintain whiteness.

In a large bowl toss the flank steak with snow peas and jicama. In a small bowl combine remaining ingredients until well blended. Toss with jicama mixture.

Sprinkle the vinegar and sesame oil over the scallops and let them marinate 30 minutes. In a wok, heat the vegetable oil. Cook the garlic, ginger and pepperflakes about 30 seconds or until aromatic. Add the mushrooms and stir-fry for 2-3 minutes. Add the scallops, jicama and green onions and stir-fry for another 3 minutes. Stir in the stock and cook another 2 minutes. Serve immediately.

Preheat the grill until hot. Brush both sides of the jicama slices with a small amount of oil. Place them on the grill and cook about 1 minute per side. Remove from grill and sprinkle with salt and lime juice.