"Not being ambitious of martyrdom, even in the cause of gastronomical enterprise, especially if the instrument is to be a contemptible, rank-smelling fungus, I never eat or cook mushrooms." 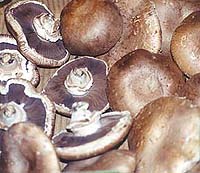 So wrote Marion Harland in her 1873 classic, Common Sense in the Household: A Manual of Practical Housewifery. At the time she was writing, Mrs. Harland did not have the option of selecting her wild mushrooms from several contiguous baskets at the produce market. Instead, she had to trust the mushroom gatherer, have confidence in her own judgment, and take certain precautions against the possibility of poisonous varieties. Boil mushrooms with a white onion and stir them with a silver spoon, she cautioned; if the onions turn black or the spoon darkens, throw everything away "and be properly thankful for your escape." Though she offers several recipes, she remains suspicious, insisting that the poisonous types "sport all colors and are usually far prettier than their virtuous kindred."

Even such an appreciative mushroom fancier as Alexandre Dumas who, early in the nineteenth century, had praised cepes for their "warm and aphrodisiac...effects" and extolled morels for their "warm and effects" and extolled morels for stimulating the appetite, fortifying and restoring the stomach, and being very useful in sauces," often had second thoughts. "I confess," he wrote with a regretful tone, "that nothing frightens me more than the appearance of mushrooms on the table, especially in a small provincial town." The safety issue was Mrs. Rorer's concern when she wrote, in her 1886 cookbook, "It is always safe to use the canned mushrooms, which are convenient and cheap, but tough and indigestible.... It is said that one poisonous mushroom among a pint of good ones will turn a silver spoon black, if stirred with it while they are stewing; this, however, is not true." Fannie Farmer, in her 1909 edition, seems more adventurous than usual when she urges that, since mushrooms "grow about us abundantly," they therefore "should often be found on the table."

These days, as we approach the twenty-first century, the basic nature of mushrooms hasn't changed -- the poisonous characters are as deadly poisonous as ever; what has changed is the basic nature of marketing mushrooms. The ones that make it into the contiguous baskets have been preapproved and have passed scrupulous inspections. They are often, however, mislabeled, though nothing tragic will ensue should one be substituted for another in the myriad preparations that await them.

Bisques, stir-fries, sauces, souffles, soubises, purees, duxelles, stuffings, pickles, raw salads -- infinity must be the final number for mushroom dishes. Alice B. Toklas even made sandwiches out of them, while Americans in the nineteenth century enjoyed a popular concoction called "mushroom catsup." Practically nothing is the best thing to do to most types, such as the fleshy fresh morels with their spongy honeycomb caps, so adept at sucking in the garlicky butter of a quick saute. Matsutake mushrooms, named for the Japanese pine tree (matsu) near which they grow, are at their aromatic best in slow-cooked stews and soups. Just a bit of cream heightens the flavors in Martha Washington's recipe "To Dress a Dish of Mushrumps."

Not everyone is so minimalist, however. The 1909 Fannie Farmer suggests that mushrooms be served under a bell-shaped glass cover "which may be bought at first-class kitchen furnishers. " Even more foreplay is required in Pierre Blot's 1867 Handbook of Practical Cookery, which suggests that "you may make, with common white note-paper, as many little square boxes as you have mushrooms to broil; grease them with butter, put the mushrooms in, set them on the gridiron, and on a moderate fire, and serve them in the boxes when done." Some varieties, like shaggy manes and beefsteak mushrooms, have been likened to meat, while oyster mushrooms are prized for their resemblance to fish or seafood. There is even something called a chicken mushroom, named for obvious reasons.

Mushrooms are often the mysterious ingredient in stories and folktales as well as in recipes. They stand accused in the deaths of such eminent personages as the real Emperor Claudius and the fictional Trimalchio, the central and symbolic character of Petronius' satire on the excesses of Roman life. By the Middle Ages their toxic qualities were harnessed into an effective fly killer. Fame at the box office came with the starring role in Andy Warhol's "Eat," a forty-five-minute movie of a man eating a mushroom. Mushrooms are an ancient food, some varieties traceable to the Stone Age. They were the food of the Pharaohs in ancient Egypt, and they remained the food of the rich throughout nineteenth-century France. For all their haughty associations, mushrooms are a most primitive plant -- a fungus, as are molds and yeasts. Not really a vegetable, they are incapable of photosynthesis for sustenance, but rather derive nourishment from feeding on other organisms. Some varieties are successfully cultivated in caves; in underground quarry tunnels, as in seventeenth-century France; and in abandoned limestone mines, as in present-day Pennsylvania.

Those who insist on foraging for mushrooms in the wild should join mycological societies or enlist the companionship of an expert when deciding on edible specimens. They would also be wise to read Jane Grigson, who lived in a cave herself and offers any mushroom lover a wealth of information in The Mushroom Feast. Her most poignant advice about mushroom hunting, however, is gleaned from a private letter that she wrote in 1975 to M. F. K. Fisher: "Perhaps a gift for finding mushrooms is like a gift for music -- sometimes it skips a generation or two and then bobs up again." With almost 40,000 varieties of mushrooms in existence, no marketplace is likely to adequately reflect the supply. In downtown Barcelona's Boqueria Market, however, the mushroom man always displays with pride one of the world's most incredible arrays. Called the king of the mushrooms, Senor Petras can explain everything in his stand, which he calls Fruits del Bosc (the fruits of the woods). During a recent visit, Senor Petras was extolling the virtues of some particularly magnificent, exotic-looking morels. "Son extraordinarias!" he said with a characteristic Catalan pride that prompted the question "Where are they from?" "Oregon," he answered with a shrug, as if he couldn't quite believe it himself.

Market Selection
Button or cultivated, chanterelle, enoki, morel, oyster, and shiitake are the most common varieties. All should be blemish free, with no signs of decay.

Cooking and Handling Notes
Because most varieties have such a high water content, mushrooms should be cooked over medium or medium-high heat until they are just brown, to develop a deep mushroom flavor.

Chanterelles, morels, shiitake, and porcini can be found in dried form. Their flavor is intense -- a little goes a long way. These dried mushrooms should be soaked in hot water until soft and rinsed of grit and sand before being added to a dish.

In a large pot, heat the butter. Cook the onion, garlic, button and shiitake mushrooms, and tomato for about 10 minutes. Stir in the thyme and 6 cups of water. Bring to a boil, reduce heat, and simmer for 30 minutes. Pass the mixture through a food mill to extract all the flavor. Return to the pot and season with salt and pepper. Cut the root ends from the enoki mushrooms and add to the broth. Reheat for 5 minutes and serve.

In a medium skillet, heat the butter and oil. Sprinkle the veal with salt and pepper and dredge in flour. Cook the veal until browned on both sides. Remove and reserve. In the same pan, cook the mushrooms with the sage and pepper flakes for about 5 minutes. Add to the veal. Pour the vinegar into the skillet and bring to a boil. Toss the greens with the veal and mushrooms and dress with warm vinegar.

In a large skillet, heat 2 tablespoons of the butter. Cook the mushrooms over high heat until they are brown. Remove and reserve.

Add the remaining 2 tablespoons of butter to the skillet. Sprinkle the chicken pieces with salt and pepper and add them to the skillet. Cook until brown on all sides. Remove and reserve.

Add the garlic to the pan and cook for about 1 minute. Pour in the vinegar and reduce until it just glazes the bottom of the pan. Return the chicken and accumulated juices to the skillet, along with the stock, carrot, and dill. Cover and simmer for 30 minutes.

Add the cream and the reserved mushrooms to the pan and cook for another 3 minutes. Remove the chicken to a serving dish and top with sauce. Garnish with watercress.

Preheat the oven to 375 degrees Farenheit.

Blot the fish dry and sprinkle with salt and pepper. Place a dill sprig on each fillet and fold the fillets in half, skin-sides in, point to point. Butter a shallow baking dish that will hold the fish in one layer. Place the fish in the dish and pour in the wine. Cover with foil and bake in the preheated oven for 15 minutes.

In a skillet, heat the butter. Cook the shallot until soft; add the chanterelles. Cook over high heat for about 5 minutes. Add the liquid from the poached fish and cook until most of the liquid has evaporated. Add the cream and cook for 2 more minutes. Season with salt and pepper and pour over the fish.

In a large pot, heat the oil. Cook the peppers, onion, and garlic until soft, about 10 minutes. Drain the porcini; strain and reserve the liquid. Chop the porcini and add to the pot with the other mushrooms. Cook over high heat, stirring, for 8 minutes. Add the tomato, parsley, cumin, oregano, chili powder, 1 cup water, and the reserved porcini liquid. Bring to a boil and add the lentils. Lower the heat and simmer for 30 minutes. Season with salt and pepper and garnish with cilantro. Serve with warm tortillas.

In a large skillet, heat the oil. Cook the onion, garlic, and celery until tender, about 8 minutes. Layer the mushrooms over the celery mixture and cook until tender, about 8 minutes. Add the tomato, oregano, parsley, pepper, and wine; bring to a boil. Reduce the heat, cover, and simmer for about 30 minutes, or until very little liquid remains. Stir in the olives and season with salt and pepper. Serve hot, warm, or at room temperature.