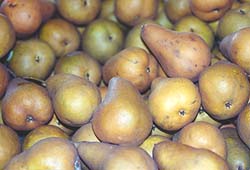 Pears are worse than fingerprints: even on the same tree, you can't find two that are identical. One has a whimsical crook in its neck, another has a blush as round and red as a circus clown's, while a third has a squat bottom designed for sitting lazily in a fruit bowl. And though the whole treeful has the same general taste, unique to its type, each pear differs ever so slightly in perfume and juiciness and in just how quickly it melts on the tongue.

But it is this very elusiveness that makes then so irresistible, not only to ordinary eaters but to botanists and growers as well. For thousands of years, pear-minded horticulturists have been experimenting with the fruit's various desirable qualities, attempting to roll everything they wanted into one perfect genetic scheme. Considering the fact that pears are one of the two dozen plants that have been under cultivation for more than 4,000 years, this has been going on for quite a while. The Romans especially loved pears according to Pliny, who, two millennia ago, was able to enumerate more than forty varieties. Some have divided pears into two simple categories: the European soft, buttery types and the crisper Asian specimens, also called sand pears. This sort of distinction is meaningless to pear addicts like Edward Bunyard, who insists, in his book The Anatomy of Dessert that "it is , in my view, the duty of an apple to be crisp and crunchable, but a pear should have such a texture as leads to silent consumption." Less enthusiastic commentators have noted that, in their opinion, the two types of pears can be described as those that resemble the taste of shampoo and those that don't. 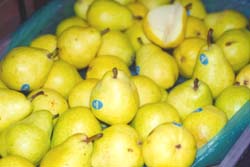 Pears can be included in any course, from salads and starters to an after dinner sip of Poire William. According to an old Korean proverb, they may even have a practical application. "Eating pears," so the ancient maxim goes, "cleans the teeth."

Market Selection
Bartlett, Anjou, Bosc, and Comice are the most common European pears found in the market place. They are buttery in texture and quite juicy when ripe. Most pears are sold while the skin is still green. For a ripe, ready-to-eat pear, look for a russet-hued skin. New on the scene is the Asian pear or sand pear, whose texture is crisp, like that of an apple. For this reason it is sometimes called apple-pear. It is not generally used in cooking. Asian pears are generally sold ripe. Depending on the variety, skin color should be golden brown or yellow green.

Cooking and handling notes
To core a halved pear, use a melon baller.

In a salad bowl, combine the endive, watercress and pears. In another bowl, whisk the vinegar, mustard, parsley and olive oil until blended. Toss the salad with the dressing and sprinkle with Gorgonzola.

In medium saucepan heat butter. Cook potatoes, pears and shallot about 5 minutes. Add the stock; bring to a boil, reduce heat, cover and simmer 15 minutes. Puree soup in food processor or blender. Return to pot and stir in the cream. Taste for salt and pepper and heat through. Serve, sprinkled with chives.

Sprinkle the chicken with salt and pepper and dredge in flour, shaking off excess. In a large skillet, heat the butter and oil. Cook chicken on all sides until golden. Remove and reserve.

Add the leek and currants to the skillet and cook 5 minutes. Add the pears and cook 2 minutes. Stir in the vinegar and stock, bring to a boil and cook until syrupy, about 3 minutes.